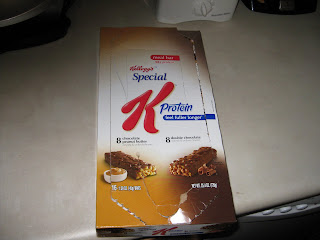 For what has been a very interesting and busy 12 days so far, the Special K diet has worked some small wonders. In what started as a test of will and suffering through what seemed to be a never ending cascading bunker of starvation, the Special K Challenge has taken over as a way of life seemingly. I’ve taken the opportunity to get creative with meal choices and keeping things as entertaining as possible. Mucho gratitude must be given to a certain g&gg reader who found an economy sized portion of the Special K Protein Meal Bars that I’ve had so much trouble obtaining. With this addition, I now have three meal choices coinciding with waffles and the cereal.

The bars are loaded with 10g of protein and give promises of leaving you feeling fuller longer. 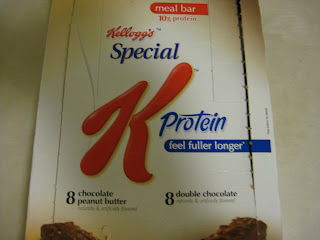 I was a very big skeptic considering the fact that the bars aren’t even that big. But for what they lack in length, the bars pack a huge punch in density. The bars basically taste like a chocolate candy bar and can be consumed in around 5.5 bites. They actually do a great job of serving as a meal, leaving me full for quite some time. They are also bombastic just based on the fact that I can take them to work or class and have a meal on the go with no inordinate difficulties. 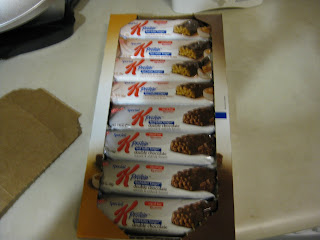 So given these options now, my days have consisted of waffles, bars, and cereal, tons of fruit eating, and carrot crunching. Fruits are the perfect snack and I’ve found this diet as an excuse to completely induce myself in the wide and wondrous world of nature’s candy. Finding a fat free veggie ranch dip and pounding away on baby carrots is another perfect snack choice.

So time for my results so far… After a week I was well on pace having lost 3 pounds. But after only 2 more days, I had already lost a total of 6 pounds… One day later I had lost another pound totaling out at 7 pounds lost so far. I have been working out on a daily basis too, but being limited by a leg injury I have done little cardio.

I’ll be back hopefully on Sunday to give you a final analysis of the Special K Challenge, but from what I can see so far, I’m very pleased.