The Wild and Whacky World of Fast Food Commericals: 11/5 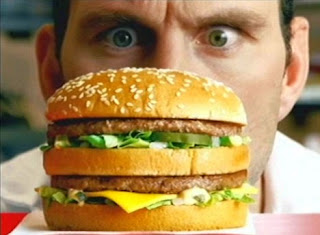 Everyone knows that the fast food industry prey’s on the weak and feeble minded.  Those too hoodwinked  to make a better decision and especially those who are too lazy to just make a healthy meal, fall victim to the incessant radio ads and nonsensical commercials on a daily basis.

Its our job here at Fast Food Geek to analyze, research, review, and badger all things fast food for the good of the common people. We take our duties ever so seriously, just like the fast food juggernauts do with every single one of their finely crafted, hollywood direction, Pulitzer Prize writing, Broadway scores, and of course Golden Globe nominee worthy acting.  Take a gander at some of the most recent ones, that have all of us talking:

Notice that over the top and slightly “dirty” undertones with the “we put bacon on it” line.  Trevor sounds like he’s saying something naughty there. And yeah, who knows if his name is Trevor, just felt like he deserved a name too if Rachel is called out at the end. I wonder if the actress’ name really is Rachel or if they just used a name that made sense for a KFC “Chef”.  Also note the hordes of men sitting on their tailgates and trunks crushing Bacon Bowls. Clearly KFC wants us to think this is some sort of tail gate feast.

Gotta love the transition from the cute girl with pig tails to the chunky middle aged woman. Almost scary as she fades in.  Kind of awkward how she says “she loves that about dad” in reference to him naming the restaurant for her. I’m sure she loves that as she laughs her way tot the bank everyday. I don’t know how Mike ate one of those burgers, they look alien like in their plumpness and juicy enough to soak through a folding table. And the way she says “it would have made him hungry” with the intensity of bull seeing Ronald McDonald, makes me think she’s about to eat the camera and everything in sight.  Tone it down a couple notches Wendy.
McDonald’s McRib:
More realistic than funny, I find myself relating to this commercial way too much.  While I’d never sacrafice a honeymoon adventure over the McRib (maybe the Cheesy Gordita Cruch, just kidding), but whenever news travels from friends regarding Fast Food Gimmicks, I have the giddiness of a school girl. Disecting the new frontiers, analyzing the bun positioning, and gossiping about how cheese just shouldn’t go there has become traditional fodder for the Fast Food Geek staff.  Gotta wonder where attractive, young people eat McRib’s surrounded by gushing fountains and sunshine. Every time I eat McDonald’s I’m rearing in pain surrounded by storm clouds and bottles of Maalox.  Also have to wonder why the airport they’re at doesn’t have a McDonalds? Food for thought indeed.
Taco Bell XXL Chalupa:
In one of the most bizarre commercials I’ve ever seen, Brian Wilson is having his beard combed by a servant, he refers to himself as “black ops”, does the robot, and does a lot of pointing. Notice no one ever eats the food in the Taco Bell ads. The food is stagnant and positioned like a monument more than something you could actually consume. If you ever catch the smaller version of this ad, Brian Wilson sits in and helps someone “close” their XXL. Only the Chalupa hasn’t even been started yet. Is Brian Wilson that greedy that he needs full chalupas or does no one actually eat Taco Bell? You decide…
Well that’s a good sampling of some of the classics the fast food industry has shoveled into our faces non stop for the last couple of weeks. We’ll be back with another roundup when more inevitably arrived. Until then, eat up!
~Fast Food Geek Staff
@fastfoodgeek