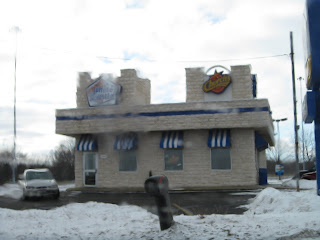 Fast food makes people do ridiculous things. Take for example, the fact that during the course of my yesteryears, I forced my parents to take me Long John Silver’s for my birthday 8 years in a row, just because they wouldn’t take me otherwise. Take for instance that I turn on the tv some days just to look for fast food commercials, and take for instance that me along with 7 others made an hour and fifteen minute journey to the nearest White Castle, just because. Trouble is, being located smack dab in Western PA, the nearest White Castle was in Akron, Ohio. Now, I’ve never been to Akron, I may have passed through it once, twice, or thrice in my travels through the great and wondrous state of Ohio, but I’ve never actually considered duffledogging myself down there for a daytrip. But like I said, fast food makes people do ridiculous things, and the Slyder’s were calling my name like flapjack yearns for maple on a cold day.

Arriving after a long journey to a restaurant, is like strapping yourself into a week longs worth of watching the View with your eyes stitched open and given unnecessary hearing aids and then finally being released, it’s quite the relief. In the year’s since the release of Harold and Kumar Go to White Castle, it’s been hard for me to sleep at night without having ever experienced the mini burgers and crink cut fries that are the jeweled desires of the film’s protagonists. The entire restaurant is based on a gimmick, so it’s hard to imagine that in 20 years of life I’ve survived without a journey such as this. 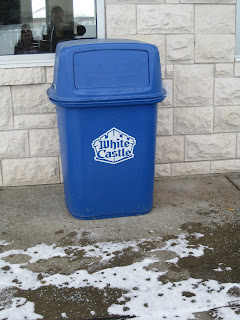 So like always, before I go to any kind of restaurant I’ve never experienced, I do my research. If anyone ever told you that you can’t do research on fast food, tell them their crazed. Knowledge is power, and power is key, so the key to knowledge and power is research. Or something like that. Included in my research of White Castle, I did a full underbelly analysis of their menu items, combo deals, and their hunger busting stoner feasts. The center piece around the menu is the Slyder burger which is a mini squared burger that is cooked through a unique process where rehydrated onions are laid on a grill with the meat patties placed on top. The steam cooking process makes it so the meat is never even flipped throughout the entire grill session. This process is currently unique to White Castle. The burgers come rather simplistically with the meat, onions, and a lone pickle encompassing a puffy bun. The Slyders can be outfitted with cheese, jalapenos, and can also be double dogged with an additional lower bun outfitted in between the two patties, ala Big Mac.

Next we move onto the boisterous sampling of sides offered. While most fast food joints only offer one maybe two sides, White Castle ups the ante with a bevy of options that would make most indecisive patrons shudder in their moccasins. Side options include, crinkle and regular cut fries, onion chips and rings, chicken rings, and mozzarella sticks. White Castle also seems to make a big deal about their coffee. But what I really liked to see out of the blank colored kingdom is that they have combos that are not outfitted for the solo folk, but also the two spot and/or group patrons. With such combos including ten burgers, two fries, and two fountain drinks, it’s a seemingly perfect meal for two. The only disturbing thing I seemed to notice was that none of the combos incorporated cheese unless it was part of the double cheeseburger combo.

White Castle has also made a living on feeding people an exorbitant amount of food, showcasing 30 burgers as a meal for one, and still hasn’t been shut down by the FDA. I bring you the Crave Case. 30 individually boxed Slyders, all conveniently stacked into a luggage like cardboard suitcase. The case goes for around 18 stones and despite this seems to be a pretty popular item. The constructive process of the “cardboard” case seemed to be quite the chore for the employees and I can only imagine the seminar that was conducted during employee training in regards to this. 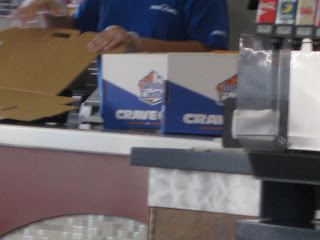 As another note, something that I really seemed to find humorous had to do with the fact that the world large was replaced with “sack” on the menu’s verbage. Nothing says I’m clogging my arteries like a proverbial sack of fries. 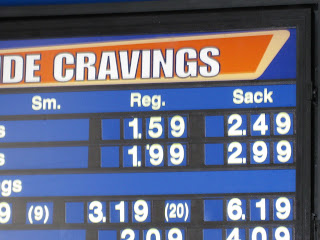 What seemingly was just an ordinary Saturday for the fine employees at White Castle, was in fact the subject of a pilgrimage that rivaled the importance and significance of the Mayflower’s doing. Well that’s taking it a little far, but lets just say this was maybe sorta almost a big deal to us. Walking in couldn’t help but notice the decor of this particular White Castle was quite glamorous for fast food standards. Coupled with plush upholstery, historic wall murals, and modern lighting that looked like it belongs in a chic coffee hut in the cultural district of town. 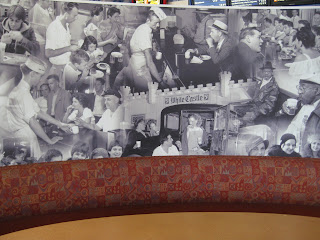 Considering the other sights and sounds of Akron, we might have been in that particular district. Regardless, the futuristic feel was certainly appetizing to my eyes and I strolled into the White Castle. 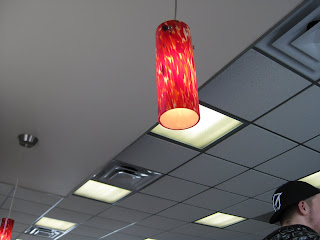 The restaurant’s actual design was quite peculiar in the way that the ordering process and line queueing system was squished in the back right corner of the building. The crave zone, an area where charts, diagrams, and cross sections segments people ordering from the rest of the uncleansed masses already partaking in their meals. 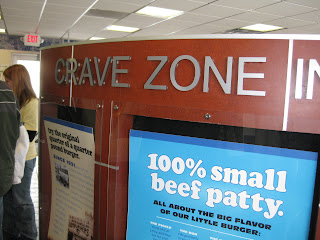 As someone who thrives on knowing ingredients, bun placements, and exact layerings of sandwiches, this particular poster made my life complete. 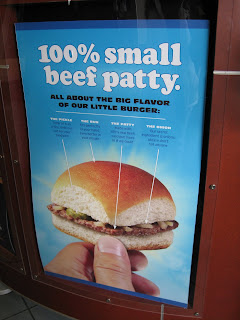 One can only wonder what that 100% small beef really means. Is that a clever way of making people think that there’s real beef while still hiding the dark truth? I guess I’ll never know, somethings are just left unsaid I guess.

It finally came time to look at the menu, and was extremely wordy for a fast food menu. Menu’s such as McDonald’s are overwhelmingly photo based for those patrons who may or may not be able to decipher the meaning of the word McFlurry. But as you can see, there are only four little photos on here and the rest is open season for the literate. 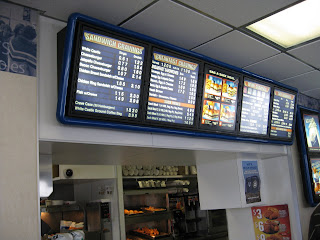 It was a minor miracle that I had made a decision within the first hour of looking at the menu. Whenever I attend restaurants, I like to think of myself as a connoisseur of not only the food, but also of the menus. I believe that if given the proper amount of time I can scan, analyze, decode, and even sense what the perfect option is for me at that particular time and date. Conquering menus for me is like planning a vacation to East Zimbabwe in a twenty minute time frame, its hard but certainly doable. Getting the most bang for my buck, I split the number three combo with one of my compatriots, getting 10 burgers, two crink daddy’s, and two fountain stains. I still can’t get over seeing double digit burgers and meal in the same sentence, but at the colorless palace, anything is possible.

In a moment, that can only be compared to the changing of the guards at Buckingham Palace, my order number was called, and I was given a tray of monumental proportions. 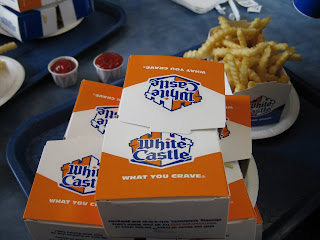 White Castle’s preference to individually harness each of their burgers in individual saddles and to tower them on paper plates in castle like towers is almost as ingenious as it is horrific for the environment. If I could truly define what the polar opposite of green was I would say that White Caste is going that color. Before taking a bite, one can only take a gander at the tomfoolery and bedeviling phrasings that are on the bottom of each container. 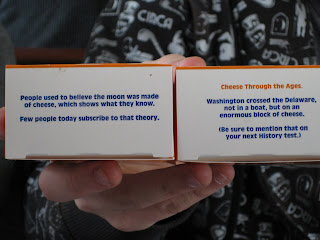 I really wonder who’s getting paid to write these. I can only imagine someone locked in a dungeon somewhere, strapped to a desk, forced to listen to a continuous loop of the Macarena, pumping out one liners. The humor is utterly random and ridiculous, which is probably why I enjoyed it so much.

In further developments, White Castle has their own store online, coupled from everything you could ever want devoted to White Castle ranging everywhere from under-roos, scarves, and a whole contingency of polos that look eerily similar to the employees uniforms. 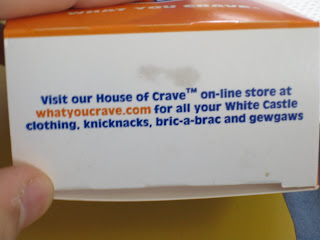 I do believe that the phrases bric-a-brac and gewgaws made the Top 4 list of most ridic phrasings in the English language that are real and not currently being used in my everyday vocabulary. 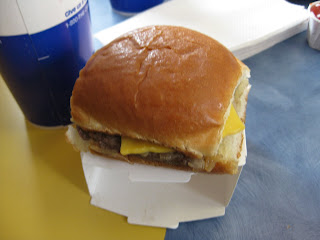 All other gimmicks aside, it was finally time to try out the real reason for the journey, the Slyder. There it is, in the flesh. Though easily fitting in my palm, and having seemingly not very much going on, these burgers sure packed a fist full of flavor. With a simple list of ingredients, a tried and true cooking technique, and a never ending gratitude to a ballsy play made back in the 1920’s, the Slyder is borderline breathtaking. Well as breathtaking as a fast food gimmick can be. All of my burgers were consumed in 4 bites or less and plowing through them was an effortless process. The onions on the burgers, along with the lone pick daddy, nibbler of cheese, and that oh so puffy bun, created a taste revolution that may or may not have caused an avalanche in the Ande’s.

The crinkle cuts only made the experience better. With a crisp, salty and golden semblance I was pleasantly surprised indeed. Though their fries are not widely publicized like their burgers, I can definingly say that their underrated at worst. Coupled with a raspberry lemonade that was so tasty it could only be filled in a special fountain behind the counter, my meal was an absolute treat. 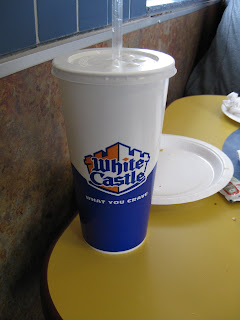 After meal festivities were quite enthralling as well. Basking in White Castle’s destruction of the rain forest, my cohorts and I tried to build our very own castles of paper products. 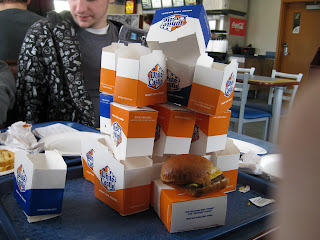 Just like all house of card attempts I’ve ever made, things always come crashing down. 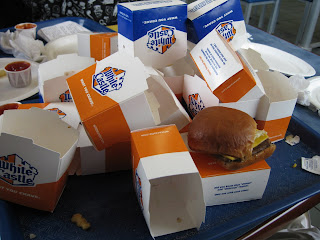 In all honesty, there was quite a bit of hype coming into my trek to White Castle. I was expecting a whole lot whenever I arrived. But I cannot lie, I was overwhelmingly satisfied with experience. From the great food, to the restaurant’s complete and utter devotion to gimmicks, to the remarkable ambiance of the journey. I’m gonna have to give the White Castle Pilgrimage 5/5 stars. There simply wasn’t a damn thing wrong. So why not throw it out there, the first 5 Star review in G&GG history. Call the sheriff.

I must apologize for the lack of posts recently, with my camera’s passing and the apparent girth of this post, I have been quite bogged down. But be ready for a Bite Sizer review from Mike that is currently on deck and also be sure that Pizza Hut’s latest outlandishness in Italy has not been passed over. We’re gonna get to the bottom of that lasagna, don’t you readers worry.