It’s truly hard to believe it’s been a full year since I traveled across the country, a task many pioneers lost their life doing, to eat a taco.  Granted it was probably the biggest innovation to food since pita chips, the Doritos Locos Taco Nacho Cheese was still just a taco.  Or so we all thought.  300 million units sold later and the Revolution de Taco hit America harder than the McNugget.  Now those regular Old El Paso hard shells you make in your mother’s oven have started to look like a bland yellow shell of nothing.  With the average Doritios eater being lumped into Nacho Cheese Revivalists or Cool Ranch Crazies half of the world was seemingly waiting for the release of “the other DLT”.  Well it’s finally upon us and I’ve already eaten one.

Something that always seems to get me is how much enthusiasm I have for a new fast food product and the complete juxtaposition I feel from the employees at a QSR.  My hype level is other worldly, while almost anytime I’ve been to a fast food eatery on launch day, the employees are more perturbed than usual.  After all, they’re stuck making more and more food for these things and they could probably care less that a new shell is out.  Random, but always interesting to note as a scowling, downtrodden man handed me my tacos last night through the drive thru window.
One thing to note when you unfurl your Cool Ranch DLT, the new taco protectors that all DLT’s come armed with are now two toned.  One side has the blue Cool Ranch while the other has the red Nacho Cheese coloring.  Being colorblind myself, the simple shading of the taco is all you have to go with to differentiate your DLT’s.  This was especially confusing because my fiance and I picked up a sampler order of one red and blue DLT.  Being in a new world, I didn’t realize that the Nacho and Ranch would have such a stark color contrast, so I went to the prehistoric smell test.  Sure enough, I smelled that classic, super enhanced ranch zest we all know and love from childhood gluttony.
In my own opinion, I think from about 5 feet away, it would be hard to tell if you had regular taco or Cool Ranch DLT in your possession.  But you’ll sure feel it in your hands because that trademark flavor dust is all over the place.  With all of my senses on red alert, I dove in for my first bite. 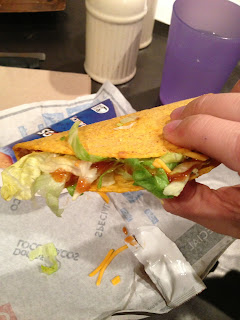 What the Cool Ranch DLT lacks in visual flair, it certainly makes up for it with taste.  Being a Cool Rancher back in the day, I had my eyes on this bite for a long time.  Not even a bit of a disappointment.  Taco Bell and Frito Lay captured the customary flavor and made it into a pretty rugged and resilient shell.  I’ve found that the Nacho Cheese shells, especially as of late, have been cracking and crumbling on me, but the Cool Ranch shell must have spent some time in the fitness center before being deployed because it held its own the whole while through. I got the OG, with only lettuce and cheese as toppings, packing only 160 calories, while others might splurge for the Supreme variety adding in tomatoes and sour cream.
If I can describe the taste in one word, it would be zestilicious.  The amount of zest the smooth ranch flavor produces compliments the smokey beef like bacon and beef.  Harmonious at worst, star crossed lovers at best.  While the Nacho Cheese DLT has a great cheesy taste, it doesn’t have the multiple notes of flavor that it’s Cool Ranch brother boasts.  Multiple ranges of flavor are sometimes hard to find in fast food, but Taco Bell has found it.  4.5 stars for the Cool Ranch DLT.  My only question after I was through: when can I have another?
Taco Bell Cool Ranch Doritos Locos Taco: 4.5/5
~Fast Food Geek