McDonald’s seems to be on an “improve our supply chain” kick lately, finally addressing many horrific conditions and ingredients that they have relied on for years. It seems they’ve either come to grips with the impact that a corporation of their size can make on the industry, or that they simply want to keep up with the ever changing consumer culture. In a land of “locavore” minded consumers that are throwing wads of cash at more and more “artisanal farm-to-table organic locally sourced, etc.” restaurants, McDonald’s is taking strides in the right direction. The recent changes are directed at their pork suppliers, which provide us with such favorites as the McRibs, and McDonald’s Breakfast Sausage. 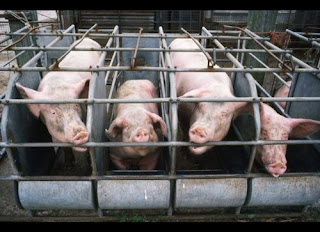 McDonald’s, despite only having pork in the morning’s and during McRib time, is still at the top of the list of pork buyers in the United States. Currently, the pig farmers from which McDonald’s pork is sourced use gestation crates. These crates house female breeding pigs during pregnancy to both allow for many pigs to be crammed in to close quarters as well as to prevent the pigs from fighting. Because breeding pigs are almost always pregnant, they spend most of their adult lives confined to the crates.
There has been a recent push in the fast food industry to clean up supply chain practices. Most notably is the “natural” emphasis by Chipotle Mexican Grill—they have been touting their antibiotic free chicken for years on their packaging. They recently released this very long commercial which aired during the 2012 Grammy’s after debuting on their YouTube channel last fall:
According to the Huffington Post, McDonald’s will now require their U.S. pork suppliers to produce a plan for phasing out the use of these crates by May. McDonald’s plans to work with the suppliers to meet this goal, however, they will not drop any suppliers who fail to meet the goal by any specific deadline. McDonald’s is joining other industry heavy weights who have already eliminated the use of gestation crates.
Eliminating the use of these crates, as well as the use of “Pink Slime” in their meat are definitely encouraging and very positive steps for both McDonald’s and the entire fast food industry. Hopefully, McDonald’s will next move on to their poultry suppliers who utilize similar practices for egg producing chickens.