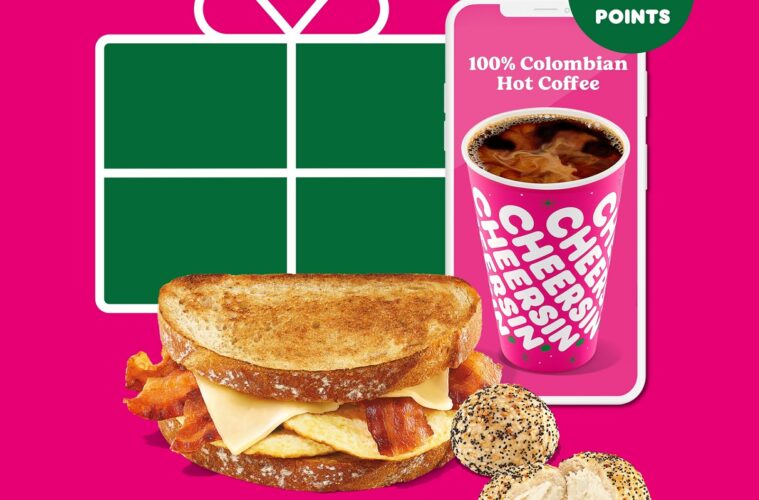 It certainly has been slim pickings around the holidays for new reviews, but Dunkin’ released a product which has received next to no attention. So hey, let’s review the Sourdough Breakfast Sandwich anyway.

The only publicity I’ve seen surrounding this sandwich at all, was just yesterday when I was driving by a Dunkin’ and the marquee actually mentioned it. Otherwise it’s pretty hard to find this sandwich even on the main Dunkin’ website. While the components of the sandwich are somewhat generic, the main ingredient of note must be the sourdough bread.

The sandwich comes in at the $4-5 range, something of a premium breakfast sandwich for most. After pulling it out of the bag, at least pre taste test it felt like you were getting solid value based on heft and girth alone.

The unveiling of the sandwich was somewhat dreary, with the Wisconsin White Cheddar having that nuclear holocaust vaporized appearance, looking discolored and shrunken. Although it at least looked like the sandwich was smiling back at me, the bacon was somewhat plentiful, but couldn’t have looked more depressingly taught. In my eyes, you want your bacon to look like an out of shape former pro wrestler who just entered an eating contest and won, not one who just finished a decathlon.

There were indeed two fried eggs, but they certainly didn’t look seasoned whatsoever. The sourdough bread was definitely of decent quality, with the outside crust at least appearing to be toasted. But this is where most, if not all of Dunkin’ sandwiches tend to fall short. Their breakfast food is most likely all prepared in one of those toasting microwaves, that typically don’t get the job done. The actual body of the bread was soft, mildly soggy, and certainly not toasty.

Being the esteemed air frying home cook that I am, throwing that bad boy in for two minutes and beaming it into crispy perfection was no issue, but I feel for the Subway Sally or the Commuting Charlie who has to eat this sandwich in its generic, sog dog form.

If you can imagine, the sandwich tasted extremely bland. Nothing was seasoned to any extent, with the sourdough providing the only bit of excitement. There was a big missed opportunity here when Dunkin’ decided against a sauce or even like a complimenting sautéed veggie component. I can understand why there is seemingly no hype surrounding this LTO.

Dunkin’ has a clear swing and a miss on the execution of this sandwich. The sourdough bread is a good idea in theory, but when it comes out softer than a newborn’s ass you can’t get by with that alone.