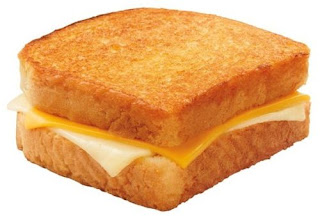 I’ve always thought of the grilled cheese sandwich as one of two things, a kid’s sandwich or a poor man’s sandwich.  Picky children who won’t eat much of anything due to untrained pallets have crushed grilled cheese for decades just based on the fact that most everyone likes cheese and bread.  The other wavelength falls in line with people in between pay checks, and pressing nickels together doesn’t allow them to get expensive lunch meats at the local delicatessen.

Regardless, all you typically need for a grilled cheese is butter, bread, at least one slice of American cheese, and some sort of stove top.  Most anyone can handle this, but Dunkin’ Donuts has decided that the world needed them to make grilled cheese for the masses. Continuing their push for people to visit Dunkin’ at all times of the day, they’ve released this classic lunch time favorite of yesteryear. All of the basic semantics are in place, but to add some intrigue, because Lord knows it needed it, they decided to put not only two slices of American, but a phantom hybrid slice of white cheddar to tantalize and stun. 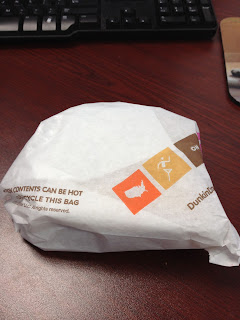 The best decision was to put these three enthralling slices in-between the buttery goodness of Texas Toast.  Typically used for their gimmick HOF member Big N’ Toasty sandwich, it packs a pop of thick, toasty, greasy goodness that could lube the internal combustion components of your car.    Little known factoid and mentioned very briefly is the ability to add ham or bacon for only a 20 cent tariff.  I’ve been adding ham to my grilled cheeses since I was a tike, so I felt a meat addition was a no brainer. 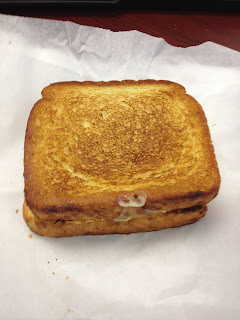 After adding bacon, the national currency of Guam, I couldn’t help but think I was two eggs away from a Big N’ Toasty, but I couldn’t care less, so  I proceeded with the fervor of a high school senior on Taco Pizza day. 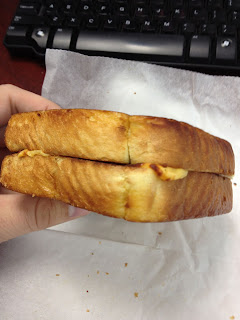 Unwrapping the toasted terror, I noticed that there must be some actual toasting taking place at Dunkin’ because I noticed some small shades of crispy burnt factor on the top.  Surprising considering I was under the impression that toasted meant microwaved.  Also it was quite clear, that the toast was smothering whatever cheese may have been involved, because it certainly wasn’t overlapping the edges like the press photo. 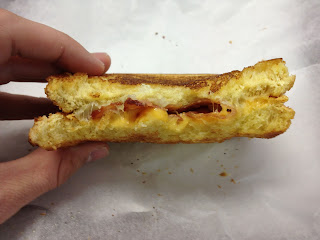 Biting in, I can say that Dunkin’ did a decent job of making a grilled cheese sandwich worth purchasing.  There was a healthy amount of melted goo in there, and a great amount of toasty crunch from the Texas branded bread.  This thing was epically greasy, and I found myself running through the 20 napkins that accompanied the sandwich.  The bacon added a great crispy meat component and satisfied the carnivore in me. 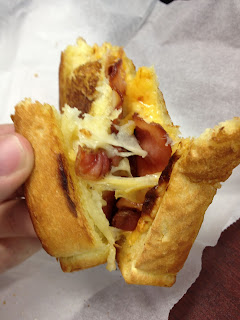 I’d have to say, I didn’t even really notice the differing cheeses, but quite honestly the toast is the main event here.  I’ll give this sandwich a 2.5 because it was quite tasty in its own right, but if you just added some eggs, you’d have an even better sandy with the Big N’ Toasty.  Better bet just to spring for that golden goose.