Dunkin Donuts unveiled a slew of holiday items with Halloween barely in the rearview mirror.  On the donut front, we get the Snickerdoodle Croissant Donut and the Caramel Cheesecake Donut.  We decided to give both a spin.  In the coming days, we will also review the new Sweet Black Pepper Bacon Breakfast Sandwich and the Snickerdoodle Macchiato.

The SnickerDoodle Croissant Donut is modeled after the Cronut craze invented by Dominique Ansel in NYC.  The idea is extraordinary and simple.  Laminated croissant dough shaped like a donut and fried like a donut.  Dominique Ansel’s version is special and deserving of the lines and praise.  Here’s a picture of the real thing that I tried last year. 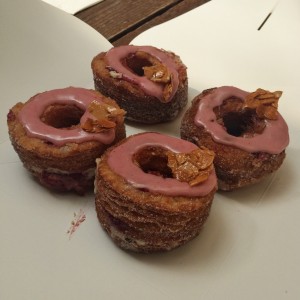 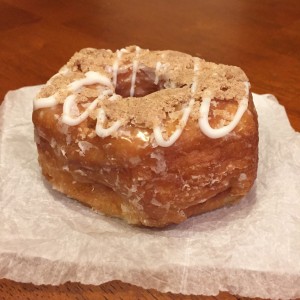 Having tried the real thing, I’ve been skeptical of knock offs and haven’t really had any interest in trying Dunkin’s version.  I happen to be a huge fan of Snicker Doodle cookies so I figured now was the time.  A defining characteristic of croissants, and cronuts, and croissant donuts, is clearly defined layers. 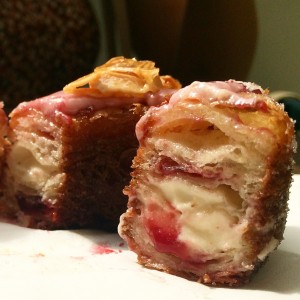 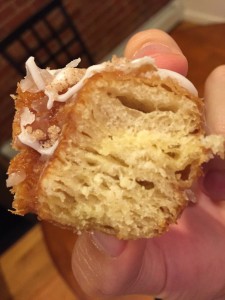 There are definitely layers, not quite as defined but they exist.  My first bite I was pleasently surprised.  It wasn’t as dense or dry as it looked when I cut it open.  For caloric reasons I only ate half of this donut–and I am very happy about that.  It was very very sweet so a whole donut would probably be a bit much.  The half I did eat definitely exceeded my expectations.  It was really tasty and had Snickerdoodle flavor and the filling was enjoyable.

[image-comparator left=”https://fastfoodgeek.com/wp-content/uploads/2015/11/Screenshot-2015-11-02-21.06.52.jpg” right=”https://fastfoodgeek.com/wp-content/uploads/2015/11/IMG_2517.jpg” width=”50%” classes=”hover”][/image-comparator]
Although this Croissant Donut was certainly not in the same league as cronut, no one on the planet expected it to be.  I would recommend giving this a try, and I would consider ordering another in the future.  The nutrition stats (below) are a bit excessive so I might stick with half a donut. 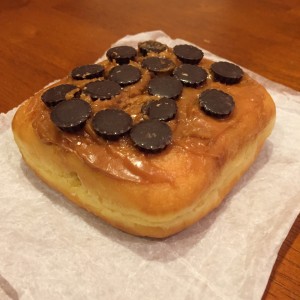 The Caramel Cheesecake square is the successor of the Pumpkin Cheesecake Square released for the fall season.  I wasn’t a huge fan of that version, mostly because I thought the filling wasn’t that great.  I decided to approach this version with an open mind and I’m glad I did.  This donut surpassed my expectations as well. 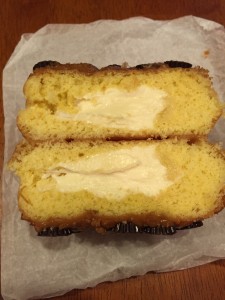 The filling is much improved over the pumpkin cheesecake filing.  The pumpkin flavoring may have contributed to the artificial taste of that donut.  Here its more of a traditional cheesecake flavor, leaning a bit more toward the cream cheese end of the spectrum.  If you’re a caramel fan, you will probably love this donut as there is a heavy dose of caramel covering the top.  My roommate is a big caramel fan and he was really into this one.  (In an effort to keep my pants from splitting, I ate half of each donut and passed on the scraps to him)  The Caramel Cheesecake donut is another fine choice and a welcome addition to the line up.
[image-comparator left=”https://fastfoodgeek.com/wp-content/uploads/2015/11/Screenshot-2015-11-02-21.04.59.jpg” right=”https://fastfoodgeek.com/wp-content/uploads/2015/11/IMG_2509.jpg” width=”50%” classes=”hover”][/image-comparator]
Score:  7.9/10

For fun, check out this vine of the donuts rotating on my record player…

Dunkin Donuts dropped these two new donuts, both pretty tasty, a sandwich, a drink, and all their holiday flavors in one day.  Its a lot to wrap your head around.  Keep checking back, we will make our way through the rest of the announcements this week.