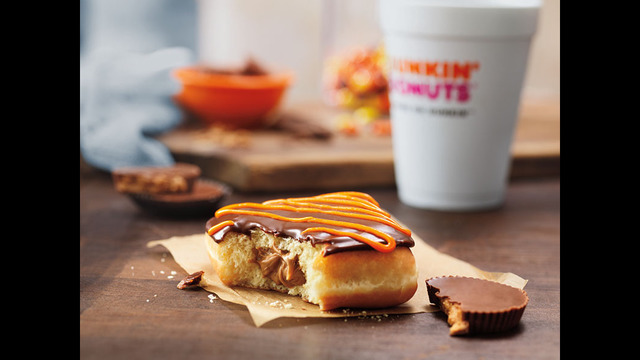 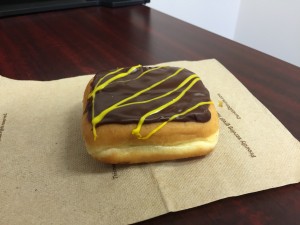 If you’re anything like me, you love donuts. No matter how it’s spelled, what gets stuffed in them, or what glorious type of icing is lathered on top of the bakery goodness.  I’m also a large peanut butter aficionado.  Creamy, chunky, natural, whipped, or fully hydrogenated I just can’t get enough peanut butter.  When I heard rumblings of a marriage between the two beings in the Dunkin Donuts Reese’s Peanut Butter Square, I was quite enamored.

If you haven’t read it yet, my last trip to Dunkin was a miserable failure.  But in my opinion, what Dunkin does best is beverages and donuts.  Thus, I refused to let a puddle of tailgate hell distract me from my quest for a peanut butter filled donut.  The last time I went on launch day, Dunkin’s supply of the Resse’s PB square was completely tapped out.  This leads me to believe that not only does Dunkin not stock enough of their donuts on a daily basis, but also this donut may appeal to the average schmo heading through the drive thru looking for trouble with an impulse buy. 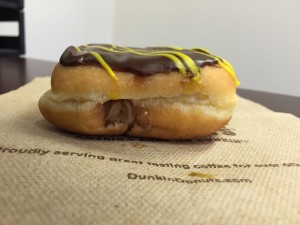 After finally getting a hold of this premium priced $1.49 square, I couldn’t help but notice its hefty nature.  This thing was dense, packed to the gills.  Dunkin’s patented creme filling sneak preview was present, with the signature peanut butter like colored substance peaking out of the side. 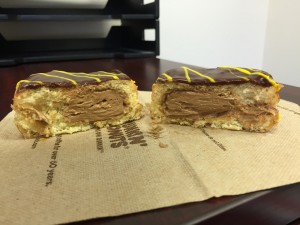 Dissecting the square down the middle revealed why the pastry felt so heavy, a heaping blob of the peanut butter creme erupted from the middle.  Taking a dab of just the peanut butter area reminded me of a sugary version of the original Jif Whips whipped peanut butter, but not the saran wrap sound effects the Whips awkwardly has .  The real deal Reese’s peanut butter taste, infused into a sweetened icing makes for one of the best donut fillers ever imagined.  The donut only improved when taking a bite of the whole ordeal, combining the flaky donut layers and chocolate frosting on top. 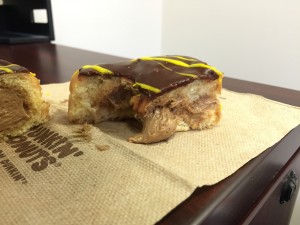 Combining the timeless Peanut Butter cup combination with a peanut butter icing stuffed chocolate frosted donut is a grand slam home run.  The creme in the middle was a little sweet overall, but it’s peanut butter nature was clearly present and stood out like a waffle in a pancake house.  Infuse the timeless nature of a chocolate frosted Dunkin donut and you have a winning combination.

The Reese’s Peanut Butter Square has 370 calories, 19 grams of fat, and 5 grams of protein.