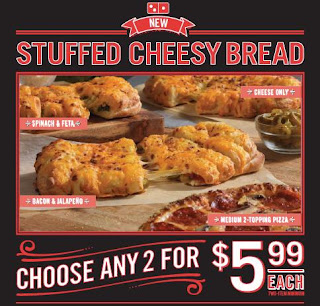 Everyone has been there before. Left broke, ashamed, and in a food drunk daze, wondering on how you spent $40 on gimmick food that was less satisfying than Brandon Roy’s NBA career.  Your stomach is cramping, you are running low on PSF’s only ten minutes after eating, and you begin sweating uncontrollably in resting positions; these are all the classic tell tale symptoms of PDGSD (Post Domino’s Gimmick Stress Disorder).  All you have left to look forward to is multiple trips to the bathroom, being comatose for days in need of a bedside nurse, and the perpetual feeling that you did something so heinous you need a shower.

As Global Domino’s Day hit last night, the FFG crew got together for another group review.  50% off online orders? How many different ways can Domino’s alter variables and distort perceptions in order to screw us out of this deal? Well the barriers were set in place like we were trying to invade Guam.  First off, the local Domino’s had disabled online ordering mysteriously for this particular evening. To make matters worse, the Domino’s website lingo was harder to decipher than a deaf person performing Morse Code. So it appears as though the deal was only for Pizza only orders.  After calling Domino’s to verify this information and it sounding like we were calling an air traffic controller at the Pentagon during a terrorist attack, it seemed quite clear that we weren’t getting the 50% off deal.

Feeling dejected after being beaten by Domino’s corporate shoots and ladders, we decided to order regardless. Utilizing the “deal” for two cheesy bread and/or medium 2 topping pizza for $5.99 each, which has been listed as an advertised sale for over a year now.  Time to just call that regular menu price. After ordering the “Cheese Only”, “Spinach and Feta” and “Bacon and Jalapeño”, we also came across an unadvertised new menu item called Parmesan Bread Bites, which were also thrown into our order with a cavalier flair that could only be seen as reckless. 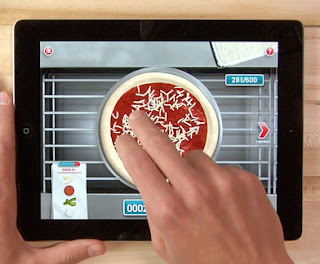 While waiting for the third world Domino’s to make our order and deliver it, we downloaded the Domino’s Pizza Hero app for the iPad.  Designed to allow the consumer to enjoy the full Domino’s employee experience, it’s hard not to laugh at how detailed the game really is. Pounding out dough, swirling around sauce, springing cheese, adding toppings, and even shoving the pizza in the oven, we’re quite sure that Domino’s is using this train new employees.

Domino’s ad campaign for the Stuffed Cheesy Bread claims that the whole pizza industry’s attitude and mentality towards cheesy bread is flawed. There just isn’t simply enough cheese.  And to make it seem like they are conscientious of their own half assed failures, they claim that they were the biggest offender.  Now they have hypothesized the problem, rounded the 2, solved for y, and came up with the brilliant deduction of adding more cheese.  Adding as much cheese as a medium pie, Domino’s is hoping that the consumer’s will be blown away with the cheese, and according to the sarcastic laden, flying from the seat of their dungarees commercial it looks like when you pull the bread apart from the middle, the cheese will ooze out for eons. 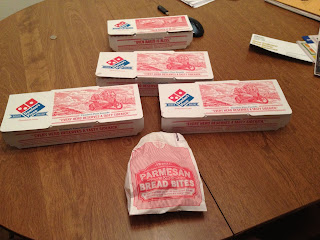 Upon receiving our bounty of boxes, it was pretty hard to believe that our entire purchase, including a satchel of wings topped off at $40. Delivery pizza packs in more hidden fees and charges than Ticketmaster.  The boxes were puny and awkwardly shaped with the girth of a super model on a crash course diet. 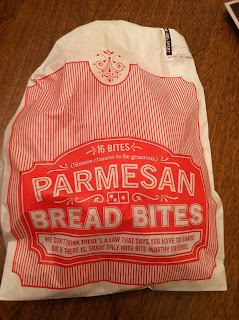 Starting off the review showcase with the Parmesan Bread Bites, we were overwhelmed with the fact that Domino’s even made a specialized bag for this product considering there being no fanfare at all for these little bits of dough. 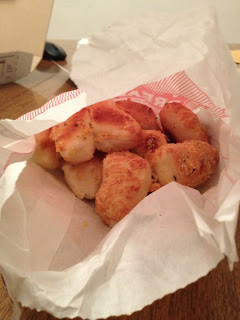 It’s no wonder these bites were added back door alley way style to the menu, because theres really nothing to even report about them.  They were misshapen, lukewarm, and the seasoning on them had less taste than that paper you ate in third grade.  Apparently Domino’s parmesan comes from a unknown land in Istanbul where cheese has no flavor.  This joke barely earns a half star. 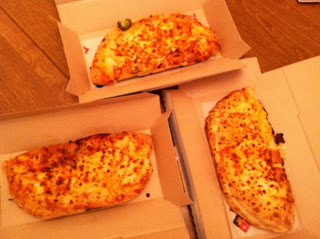 Moving along to the real deal big time main event Saturday night special Stuffed Cheesy Bread, we decided to begin our odyssey of lactose with the “Cheese Only” variety. I find it pretty comical that this name made it through the marketing rounds.  You’re telling me “Original” or “Regular” got bypassed for “Cheese Only”. It sounds like someone ordering a burger.
As the patented pull apart test exhibits, this bread is indeed stuffed with a lot of the cheese.  Melty, gooey, and laced with the classic pizza cheese, it is definitely an upgrade over Domino’s prior offerings, which were pretty much breadsticks with a light sprinkling of cheese on the top. 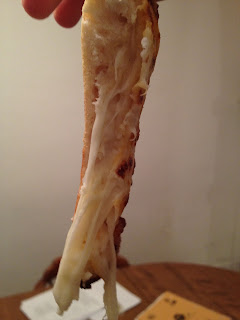 We were pretty impressed with the Cheese Only, with a stretch factor of 9.6 and a mass amount of cheese in every bite, it’s pretty clear Domino’s succeeded in their mission of moo.  Have to give the Cheese Only a 3 star rating. 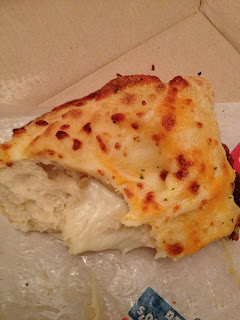 Its at this point where things fell apart.  As Pizza Hut discovered earlier this year with Ultimate Stuff’d crust, where they added meat and other toppings to their cheesy stuffed crust, when you add toppings to cheese infused items, the abundance of cheese suffers greatly.  I’m all for great toppings and adding flavor to anything, but when you have to sacrifice cheese, anarchy ensues. 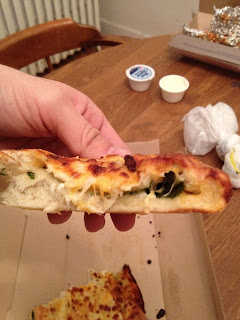 The Spinach & Feta option was next on the gambit. As we saw in last month’s Artisan Pizza review, domino’s love’s warped and befuddled leaves of lettuce.  I still can’t believe that Domino’s toppings were made on this planet, let alone can be trusted to be called fresh.
As you can easily see, the stretch factor is minuscule at best with this one.  Clearly Domino’s thought that the uncleansed masses ordering cheesy bread would definitely want more spinach.  As the photo above indicates, there are tiny bits of feta cheese laced within the inner core that in our opinion offered absolutely nothing to the package. Bland and boring, with this failed flavor offering pretty much nothing to get excited about unless you’re vegetarian, the Spinach & Feta stutters and stupefies itself to one star review. 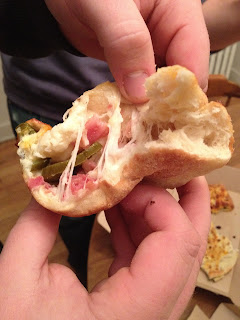 The last one we tried, was also the one that we held out the highest hopes for with personal interest.  The Bacon and Jalapeño variety tugged at our heart strings.  Being men, in our low to mid 20’s, its hard not to love spicy things.  And what is better than bacon? The meat that has captivated an entire nation, word on the street is that governing nations might start to accept it as a form of currency soon.
The random jalap on top of the cheese bread was pretty comical, almost like the folks at Domino’s identifying the flavor for us.  But as we would soon find out, Domino’s failed at this sure fire flavor as well.  Again, the boatload of curds we had grown to love in the original variety, were on the side of a milk carton.  And it also appears as though Domino’s has grown a woodsman’s beard, strapped up their ice skates, and decided that income << universal health care because it appeared that what was stuffed into our bread was none other than Canadian Bacon.  The meat we encountered within was ham in its purest form, in color, nature, and in texture. It appeared that our bold brother bacon had went the way of the cheese. 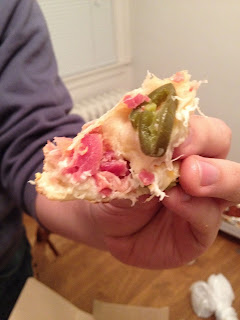 The jalapeños were quite spicy but that couldn’t carry this cheesy bread out of the gutter.  With the Ham v Bacon Bout of 2011, minimum cheese, we had to struggle giving this bread a 2 star rating. 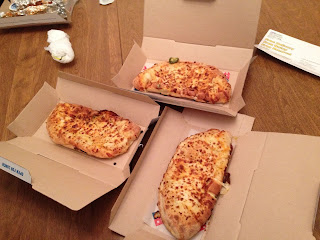 Overall, I’d have to say were all quite fooled by Domino’s Stuffed Cheesy Bread. While everyone likes toppings and new flavors, it would have probably been better if they would have just stuck to the og.  Stepping out into realms unknown, like angels without wings, just leaves you looking foolish and face first on the ground.  Also the way that Domino’s bread is shaped, its hard not to believe that they took an unsauced medium pie and just folded it over.  This would explain why the corners and crevices are devoid of anything resembling anything but bread.  Also quite sure that Domino’s should just throw away their reject dough instead of labeling them Parmesan Bread Bites. 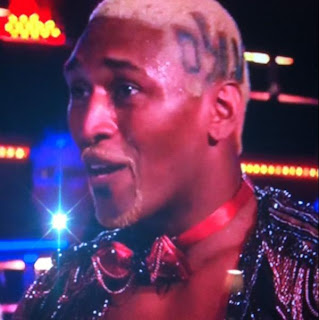 Left sunken, sullen, and running for the bathroom, we all sunk into a doughy wintry depression.  $40 and nothing to show for it other than a hunger that had never been sufficed.  Like Metta World Peace and his attempts at feigning sanity, we faltered, failed, and inevitably farted. 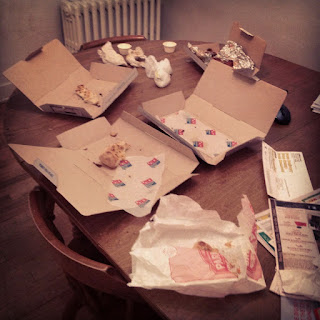 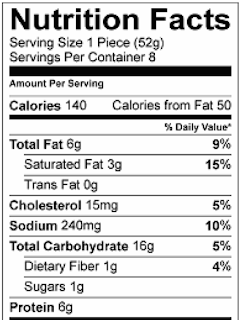 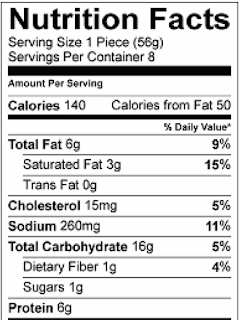 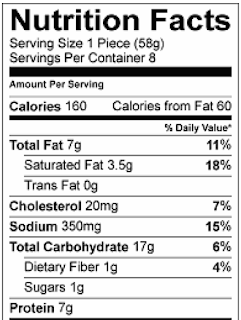