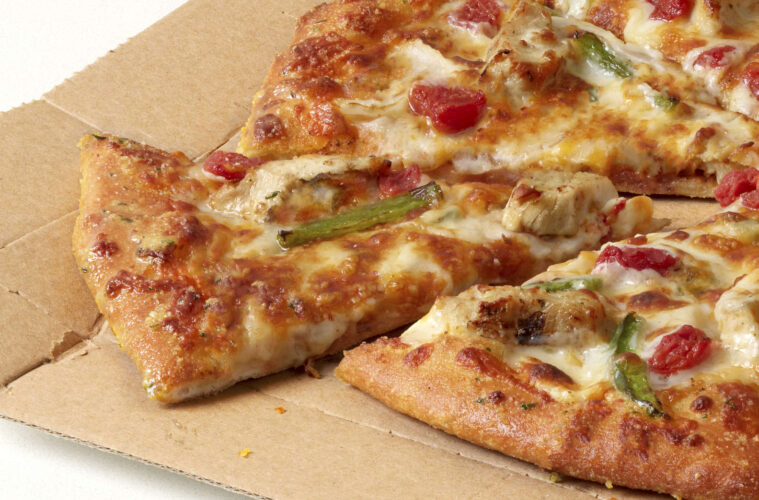 The never ending chain pizza battles continues with Domino’s taking aim at people who don’t actually want to eat pizza with the Chicken Taco Speciality Pizza. We take a look and see if it’s actually any good.

When I think about wanting a burger or a rustic taco option, I typically don’t think about Domino’s. But Domino’s is pushing the envelope and trying to reach out to your friend who won’t agree with the groups’ urge to get pizza by offering a couple of new specialty pies aimed at the taco and cheeseburger lover in our lives.

I’ve personally loved chicken on my pie since I was a lad, plus my affinity for tacos knows no bounds, so I was immediately pulled toward the Chicken Taco pie option.

One of the immediate things I noticed regarding the pizza description is the lack of a sauce. Domino’s appears to instead be relying on Taco Seasoning and diced tomatoes to hold down the fort. I know that some other taco pizzas I’ve enjoyed rely on “taco sauce” so this is an interesting choice.

While you can get the specialty pizzas at Domino’s in a multitude of ways, we decided to get Domino’s gold standard “Carryout Any 2 or More for $5.99” with some other items and tagged on the special pizza uncharge of $3.00. Still $8.99 for a speciality pizza of any size is a deal in my eyes.

Opening up the pie it is obvious that there is a lot of cheese layered on the pie, with a haphazard smattering of the fajita themed toppings. One thing that you can always count on is that a fast food pizza chain’s employee’s application of toppings will be a wild ride at best.

The pizza tasted surprisingly grand. While the aforementioned taco seasoning didn’t seem to have a huge presence, the pile of chicken, green peppers, onions, and diced tomatoes made for a great combo. It definitely had the feeling of a fully loaded pie with the chicken not being skimped on.

While there certainly wasn’t supposed to be a sauce, it certainly seemed like there was a white creamy sauce on the bottom layer. It’s hard to know if this particular Domino’s went rogue and started adding a white sauce (Domino’s has ranch, Alfredo, and garlic parmesan as white sauce options), but the mystery sauce definitely seemed to compliment the flavor profile.

In my eyes, this pizza would be better suited to be called the Chicken Fajita pizza, as the peppers and onions and chicken scream more to the fajita realm. This didn’t take away from the good and hearty flavor. If anything was missing, it was some spice as this is a quite mild flavor for a pseudo Mexican pie. I think that this particular pizza build the seasoning was either almost forgotten only mildly used.

This pizza was certainly tasty enough to order again, and to me, even has more potential if the taco seasoning was dusted on further. While not a taco by any means, this “fajita” pizza is a very solid speciality pizza from Domino’s. PS try the Domino’s Parmesan Bread Twists, they were surprisingly divine.