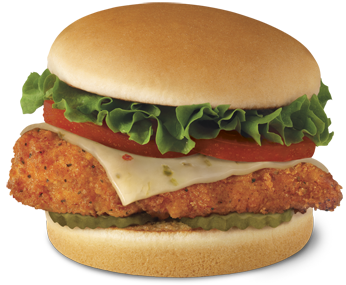 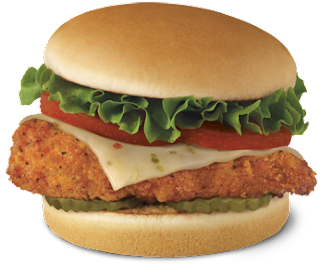 While we often kid about Chick-Fil-A and their religious undertones, it’s hard to ignore just how glorious their food can be. While delivering the best grilled chicken sandwich on the market with the FFG approved Chargrilled Chicken Club sandwich, having what are widely considered the best fries in the market with their eggo style fritters, their true gem sparkles as #4 on their menu and #1 in our hearts. Arriving in May of 2010 with the fanfare, pomp, and circumstance of a major sports title, the original and deluxe Spicy Chicken roared into life.

Skipping the gimmick stage and entering as a full time menu item, it was hard not to take the sandwich seriously. Often compared to Wendy’s Spicy Chicken Sandwich in quality, flavor, vim, and vigor Chick-Fil-A’s is the only one in the game that get’s fried in its own special bath of grease. The beef-less restaurant actually uses separate deep fryers for their original and spicy chickens. But after tasting the chicken last year, it was hard to argue with the results. But does this spicy beast past the vicious test of time? We decided to take a look by taking on the Spicy Chicken Sandwich Deluxe for our newest addition to the Classic Reviews pantheon. 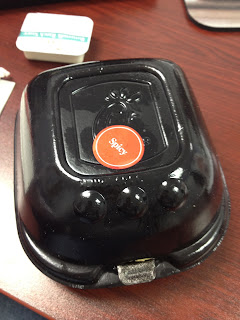 Chick-Fil-A traditionally serves their sandwiches in some sort of sack like bag. Wrapped up and insulated with a modified type of foil, it gets the job done for their original variety sandwich because there’s no toppings to be seen besides two pickles. But if you spring for the deluxe model, you not only add lettuce and tomato, but also the rights to a slice of pepper jack cheese. These are all carefully housed in this black styrofoam container, that looks like it was handled last by a grease monkey. Don’t know why the canister was lubed up like it was ready for the WWE, but I’m pretty sure that was last time I’ve seen so much grease relative to square footage. 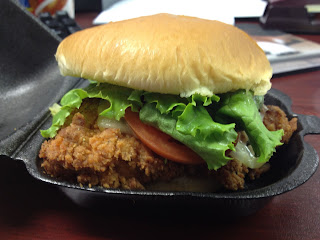 After I put on medical gloves to open the container, I was graced with presence of royalty. Hand crafted by the grace of a Greek God, this sandwich had the look, smell, and grace of a lightning bolt produced by Zeus’ hand. The toppings were fresher than your grocer’s produce section, the cheese was melted onto the chicken and not hapharzardly tossed on top of the other toppings, and best of all the chicken filet was ampler and bustier than Chaz Bono’s c cups. 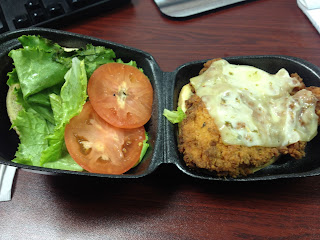 For my buck, the idea of your chicken sandwich having a preformed and regulated patty shape is quite unsettling. Because how egregious do you have to be to believe that all chickens share the same dimensions and girth? That’s what I loved about this breast from the Chick, lobsided, crispy, tender, juicy, and completely unorthodox in shape. Based on site alone, this sandwich had the makings of a pantheon member. 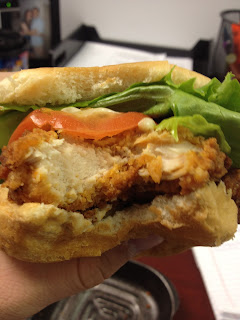 Biting into the sandwich with the ferocity of a cheetah on a wounded gazelle, I was astounded by the mass amounts of flavor that rocked my world. In this gig, you become spoiled by the pre processed, triple cheese blended, chicken fried double batter broiled, mish mash mush that comes with over 94% of the gimmicks you see, but whenever you bite down into something like this, things really change. The sun is brighter, the birds chirp with more fervor, the whole world seems to slow down just a bit. I guess the last part could have something to do with cardiac arrest, but what I’m trying to say is that this sandwich tastes amazing. 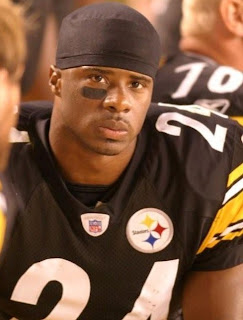 The chicken along with its spicy beading and seasoning is finely tuned. Offering an authentic southern style swag that only Ike Taylor could have previously brought to the table, the sandwich brings the flavor and the heat. Pretty spicy for a mass produced sandwich, it’ll even please that father of yours who claims that the surface of the sun is a bit mild for his taste. But the actual flavoring is what really brings this sandwich to my knees, with the vegetables being crispy and luscious and the addition pepper jack brings the perfect cheese compliment. While no sauce is offered on the sandwich, the addition of ranch dressing can be attained on the side, offering a very solid dipping option. 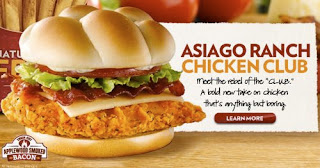 While it still remains to be seen if it can tackle the Asiago Ranch Spicy Chicken Club that Wendy’s is now offering on their full time menu, I’d have to say this is the best fast food sandwich I’ve had in years. This sandwich is legit, and you can take that to the bank. 4.5 stars for the Spicy Chicken Deluxe.