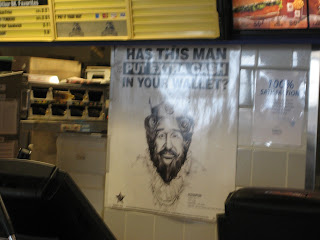 First of all, feel free to throw your email over in the box to in the upper right area of the site to sign up for the official g&gg mailing list.

Back in the nineties, Burger King spent millions and millions of dollars on research and development for what was to be their new french fry. All of this money, and along with an ad campaign with Mr. Potato Head brought BK’s fries into what we have today. Because of Burger King’s illustrious history with fries, it seemed quite necessary to go and have a genuine gimmick lunch at Burger King and take a look at the regular french fries as well as the new and supposedly healthy Apple Fries, and the biggest gimmick of them all, the Chicken Fries.

First off, this was one of my most confusing and dumbfounding transactions to date. When I go to fast food restaurants, I don’t expect things to be easy. Employees at fast food restaurants usually aren’t the most receptive to change. So when I went to Burger King on this particular day, I had a plan set out. I was going to order three single items and just deal with the fact that it would most likely be pricey. So whenever I said “i’ll have an order of the chicken fries, with an order of apple fries” and was promptly cut off, card taken from me, had it swiped, and then handed back to me, I was literally speechless. It was a classic case of the “employee combo assumption”. I had been outfitted for a combo that I desperately didn’t want. I decided that this was a day to not cause a stir so I would simply just take my Chicken Fries with the Apple Fries, bail on the regular fries and sip on the Diet Pepsi anyway.

What happened next was nothing short of fate or fantasy. I was given my order with regular fries. In a staunch move I spoke up and asked for the healthy alternative that I was entitled too. The woman promptly handed me the apple fries and refused to take back the regular fries. In the end I got what I had wanted to begin with, plus beverage. Maybe things would work out after all. 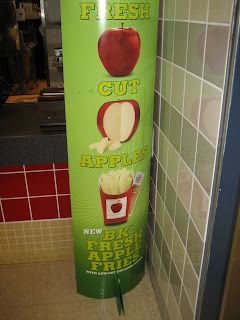 If you take a look at this large poster-like advertisement, one can only wonder what’s really going on here. Is BK getting large inhumane carts full of fresh gala’s? Did the King just go out and round up and hire a whole slew of apple cutters to carefully formulate these once darling little apples into fry shaped strips? Well I was besmirched enough by this poster that I had to investigate.

Here are my apple fries: 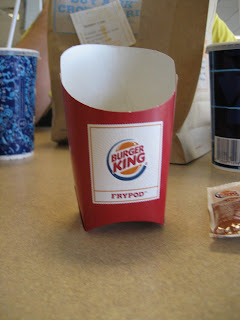 Not exactly looking like that poster, eh? In one of the most classic examples of fast food false advertising, the Apple Fries were nowhere to be seen… What happened to the picture where they were bursting out the Fry-pod, almost tearing it at the seams. How can anyone get this and not have a feeling of at least a little disappointment. I mean if fast food customers are making a conscious effort to be healthy, the least thing you could do is give them something more.

It turns out that the box wasn’t empty, but either the picture is the handiwork of an extremely good food modeler aka the best profession of all time, or they simply doubled even tripled the serving size for the picture. I was left with something like eight or nine quality sized “apple fries” and a handful of niblets. 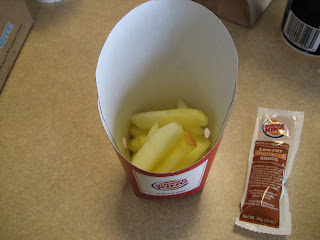 The accompanying caramel sauce was touted as being low fat and made for hearty dipping. The Apple Fries did indeed taste like fresh apples and the sauce wasn’t lacking either. So I’ll have to give the Apple Dippers a 2/5 because of the simple fact that presentation and execution just weren’t making the necessary connections. 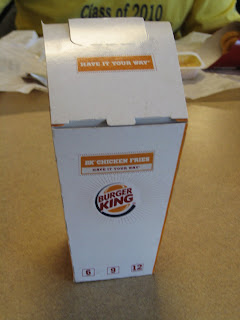 Next I moved on to a full time menu item, that desperately needed to be reviewed based on the fact of its packaging. Somewhere along the line Burger King decided it was a good idea to throw fun and witty jokes on their fast food containers. As you take a look at this carton like contraption, you find yourself asking, what could this possibly contain? 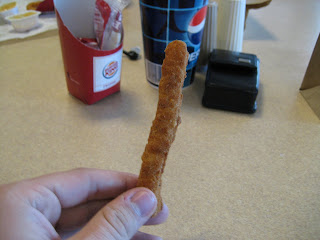 The simple answer is chicken fries. A fry like strip of chicken that is specifically designed for dipping.

As you can see in the picture below, the carton is specifically designed to hold your sauce pouch, making dipping all the more convenient. After all, its so much easier to dip something using a wobbly flap of paper as support instead of a hard plastic table. I dearly hope, whoever designed this didn’t get promoted as stated. But you have to wonder if BK can really proclaim to the masses that they promoted this guy, without actually doing it? 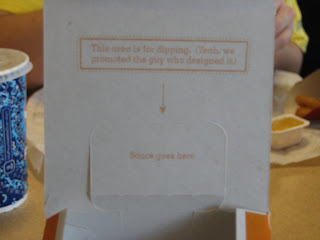 Despite these ridiculous statements I forged on and plopped my favorite sauce down into the designated area. I thought it would have been a lot easier, but I guess BK is giving promotions to anyone right now. 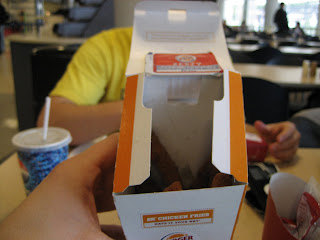 So I was ready to go. In what I hope will be a continuing trend with g&gg I decided to take a short clip of the actual eating approach:

There are many observations to take from that 16 seconds. First off, the chicken fries look just as advertised. Like some sort of deranged chicken string experiment that went terribly wrong. The selected “fry” I picked up had a distinct curvature to it as well. Exactly what part of the chicken is this again? Moving on, you can see how stable the sauce contraption is. My first dip almost toppled the whole ordeal. Lastly, you can see my sloppy self bite down. Its hard not to grimace at the flavor of the Chicken Fries. They have a very distinctive bold and bitter flavor. Too overpowering for its own good I was caught off guard on how BK could mishandle such an easy assignment. I’ll have to give the Chicken Fries a 1.5/5. The packaging and the claims in it yields along with the mismanaged flavor left me clamoring for a cleansed palate. 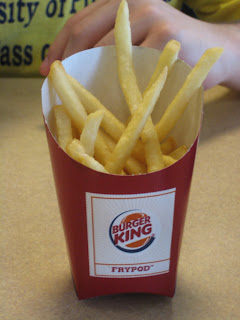 I quickly moved on the regular fries, hoping that old faithful wouldn’t let me down. I have always been a fan of BK’s fries and my feelings have not changed. I’ve always been high of the crispy factor and I won’t let the critics stop me from saying that they’re better than McDonald’s or Wendy’s fries. I’ll give them a 4/5. 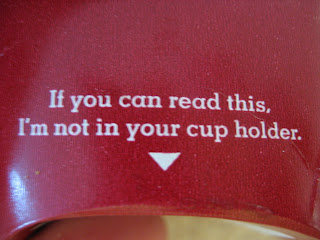 What you see here is the bottom of the BK “Fry Pod”. This is just another example of the fast food industry trying to destroy more lives. As if it weren’t enough to eat this food in the safe dwellings of the restaurant, BK is going out of their way to get you to eat their food while driving. Burger King wants your two cup holders in the driving area to be outfitted with not only your beverage but also your fries. With the burger on your lap, you’re only a mayo drip or a pothole away from disaster. BK is not only trying to make you gain weight, they’re also trying to make it all too easy for you to cause a 10 car pile up.

Check back later as Mike begins his tour of the world of fast food mushroom gimmicks with the Gourmet Mushroom Swiss Burger from Wendy’s.