Well, well, well… Looks like someone got a wild hair in his whopper and decided it was time to finally write a new review. Its been quite a long time folks. 2012 was quite a year for us. We put a lot of effort into the site, started a twitter account, gained a ton of new followers and we were moving right along. That is until summer hit. Its hard to keep pounding down value meals while keeping these beach bods intact. Since the Cantina Bowl, we have completely neglected the site and you are loyal readers. We even let our domain slip into purgatory and had to renew it. Thankfully, we are going to give a revival tour our best shot.

So that brings us to Burger King’s NEW Wisconsin White Cheddar Whopper. The alliteration had my taste buds doing some sort of jig/salsa dance. I envisioned large beef patties, smothered with melted white cheddar cheese, topped with two by fours of bacon. The side of seasoned sweet potato curly fries was icing on the cake. I decided to dust off my eating pants, and hey they actually fit better after the hiatus.

At first glance this Burger was quite underwhelming. I couldn’t help but be let down when I opened up the packaging to find what seemed like a normal whopper with 2 measly strips of bacon. The “Wisconsin White Cheddar” wasn’t even melted yet. I don’t know about you, but if you put the type of cheese in the name of the burger, wouldn’t you think that thing would be drowning in hot melted lava flows of cheese? Guess that was just wishful thinking on my part.

Three bites in, I knew I had been suckered by gimmick marketing. This was just a whopper with bacon and cheese. There was nothing Wisconsin about this burger, and I’m not even convinced it was cheddar cheese. The usually whopper toppings like Ketchup and mayonnaise drowned out any flavor that artisan cheese may have even brought to the party.
The X-factor in this whole operation were the “Seasoned Sweet Potato Curly Fries”. I freaking love sweet potato fries, and really have never seen them in the curly variety. 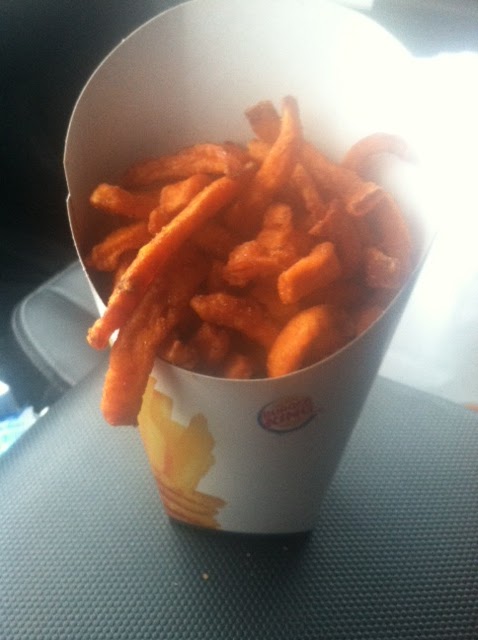 Fooled again. These things weren’t curly. They were barely even curved. Either these things were hot sellers all day, or they really half assed this release. The flavor was great. These sugary/salty sweet seasoning was thoroughly enjoyable, but the chewy, lukewarm texture and temp really made me wish I had gotten a fresh batch.
In conclusion, I almost regretted coming out of our brief retirement after I ate this burger. It was so bland, and boring that I was angry at myself for feeling motivated to put out a review. I still have that fast food oniony taste on the back of my tongue as I write this. This was a weak attempt by Burger King to honor its most famous burger. If only they still made ’em like they used to.
Wisconsin White Cheddar Whopper: 1.5/5
Seasoned Sweet Potato Curly Fries: 2/5
You can check out other reviews of these items by our friends over at Grub Grade
Until next sauce,
-FastFoodGeeks