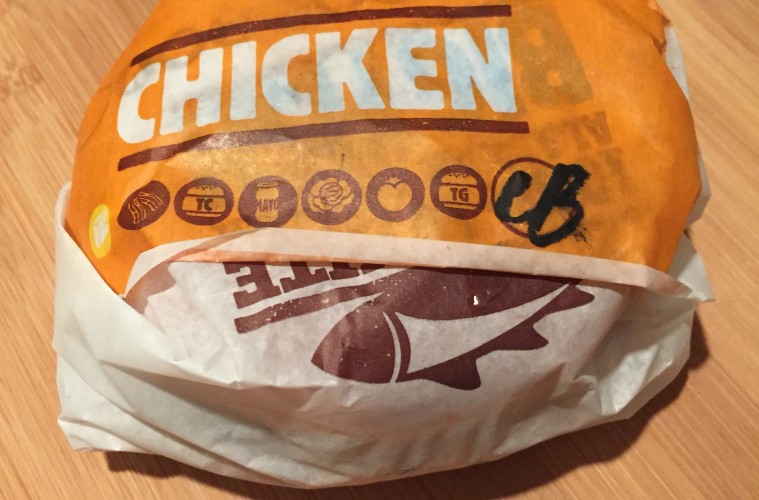 Burger King has added a Flame Grilled Chicken Burger to their already huge menu.  This is now the fourth different chicken sandwich–not counting the Jr varieties.  The Chicken Burger is dressed up like a beef burger and we decided to take it for a spin.

The Flame Grilled Chicken Burger joins the Tendercrisp Chicken, the Original Chicken and the Tendergrill Chicken sandwiches.  As the name suggests the Chicken Burger is a grilled ground chicken patty which presents you with a second non-fried option. 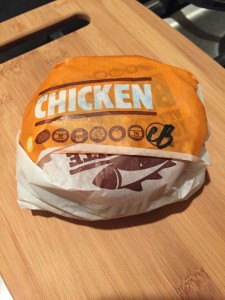 From the non-beef ground meat patty category, one often sees Turkey Burgers, but here we get ground up Chicken like a large chicken nugget.  Its then treated to the dramatic exaggerated grill markings and signature BK flame grilled taste.

Now it’s time for the most dramatic IRL Fast Food Geek slider yet:

[image-comparator left=”https://fastfoodgeek.com/wp-content/uploads/2015/12/fg_chkn_burger_detail2.jpeg” right=”https://fastfoodgeek.com/wp-content/uploads/2015/12/img_0548.jpeg” width=”70%” classes=”hover”][/image-comparator]
Immediately it’s abundantly clear that the finished product is a little different than the marketing image.  Looks like they forgot that flowing leafy green lettuce, but they didn’t: 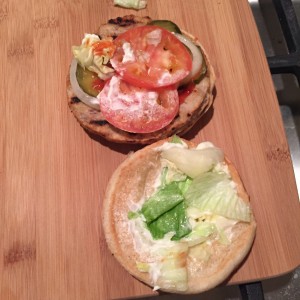 I don’t understand why BK treats lettuce like Chiptole treats guacamole.  Even when they give you enough, they give you all white inner pieces.  I imagine the lettuce bag that each restaurant receives is literally only the core of lettuce heads.  And I swear every time I pick up a burger king sandwich this happens: 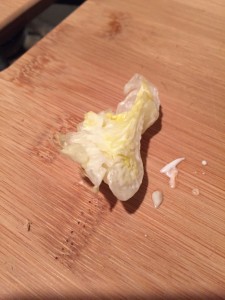 One of the precious few pieces, the inner most core piece, immediately falls out of the sandwich and hits the deck.

As for the patty, when consumed alone it doesn’t quite taste like much of anything but the smoky BK grill taste.  Eaten as a whole, it does give you a sensation of eating a burger with the pickles and mayo.  If you’re avoid red meat this could be a good alternative.  The patty itself is relatively thick and sizable so it’s a good portion size.  Basically the burger is similar to what you got in your school cafeteria growing up. 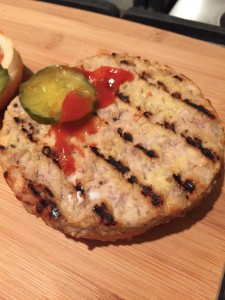 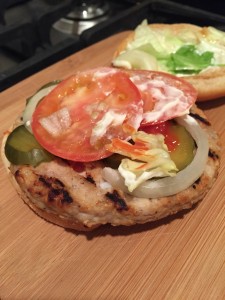 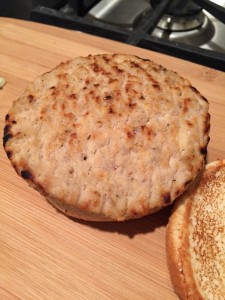 The problem is, from a nutrition standpoint, unless your objective is to avoid red meat, this actually isn’t a great option.  There is an assumption that Chicken Burger is healthier, but this isn’t the case.  Take a look at the nutrition comparison between the Chicken Burger and a Beef Burger configured to have the same build.  I looked at the Bacon Cheese Burger Deluxe and removed the bacon, cheese, and mustard:

[UPDATED to include mayo in the beef burger stats below]

The configuration options for the Bacon Cheese Burger Deluxe does not include mayo so we need to add it in separately.  With mayo added to the above stats, you get 340 calories and 21g of fat vs the 480 calories and 25g of fat in the chicken burger.  The beef patty burger also has way less sodium.  The only areas the Chicken Burger wins is it has lots of protein and a lot less cholesterol.  On top of that, if you leave the Bacon Cheese Burger Deluxe as is, it still beats the Flame Grilled Chicken Burger in many of the key categories.

[Also note, the Bacon Cheese Burger Deluxe was chosen as a point of comparison because the Whopper is a disaster.  The Whopper patty by itself has 250 calories and 19g of fat.  The beef patty used in the BCBD has only 90 calories and 7g of fat.] 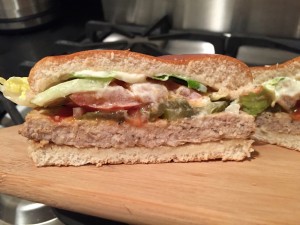 The Chicken Burger suffers from the same old BK problems; bad lettuce, haphazard construction.  I think there’s an expectation that ordering a Chicken Burger will be a healthier lunch.  Sure Chicken is better than red meat (says some websites) but beyond that, nearly every stat is worse than a comparable beef burger.

Look, I think Burger King is making the right bet with their overall strategy.  They know they can’t and shouldn’t try to keep up with the arms race of pseudo gourmet menu upgrades that Wendy’s and McDonald’s are currently competing.  McDonald’s has the stones to suggest that their grilled chicken is made by artisans and Burger King doesn’t even feel comfortable calling their buns brioche without tempering expectations with the “style” qualifier.

For all the people who are excited about the addition of new-to-fast-food ingredients like Gouda, there are millions more who are turned off by this.  Burger King wants to sit in that void being left by the others and they have a chance to capture a lot of QSR purchases.  The problem for me is that I keep going to Burger Kings with low expectations and still end up dissatisfied.  If I didn’t get the 2 for $5 deal, I would be very unhappy with this and it’s not the first time.  If they could find a way to improve the quality of their produce, while also keeping prices low then Burger King could significantly improve the final product.  In the meantime, look for the next Burger King menu item to be pulled from your school cafeteria.  I’ll keep my eyes peeled for the BK Buffalo Chicken Pizza or the BK Taco Bar.