“Flame-broiled premium ground chuck patty.” “Naturally smoked hardwood bacon.” “Fresh cut romaine lettuce.” Yes, the lofty terms being used by Burger King to describe their BK Chef’s Choice Burgers drip with adjectives, all meant to convey a single bullet-point: Quality. Yes, for some, the minimalist beauty offered by the great Rodeo Cheeseburger just isn’t enough to justify a trip (nay, a quest) to this fast food stalwart. Nor are they satisfied by the classic offering of the Whopper, be it of the 1, 2, or 3 patty variety; nor even are they swayed by the promise of a colorful cardboard crown. They must have The Best. Ergo: the Bacon Chedder BBQ BK Chef’s Choice Burger (I didn’t miss anything there, did I?).

Sadly, polarizing mascot “The King” is no longer  around to peddle his royal foodstuffs to the common folk; based upon this article, I’m guessing his royal head was not spared the guillotine in the wake of the quarterly report. Poor “King.” He just wanted to be loved. Blame instead should have fallen upon the BK marketing team, which seemed from afar to be investing much of its budget in “herbal supplements” while trying to rip off bite-sized chunks of a rival kingdom’s gimmick. 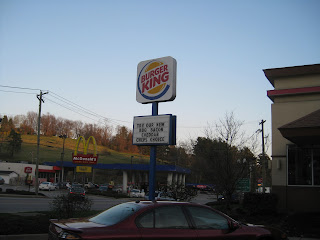 OK. This time it would be all burger, no gimmick. Even if this “new” sandwich had already been around for seemingly a decade elsewhere. 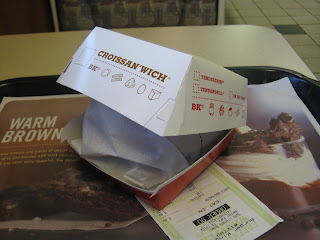 Once my humble carriage was parked in the courtyard of the royal palace, I entered and paid homage to the king’s court. I was given an ultimatum: pay tribute to the monarchy in the form of $5.87 American currency, or it was back from whence ye came, BBQ burger-less. I begrudgingly handed the guardian his stout toll and found myself a corner booth in the largely unpopulated restaurant, the Holy Grail in my possession. Once I had found a spot that would attract the least attention while I photographed my partially-eaten food, I went to work. 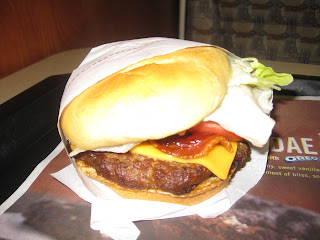 I opened the box which the sandwich was given to me in, and saw that it had been partially wrapped in a style very reminiscent of the W Burger I’d eaten from Wendy’s recently. Hmmm. The little bit I saw made it fully apparent that the meat was thick, the bread artisan. I picked it up and was surprised by the warmth coming from the bottom of the bun. This big guy seemed serious. 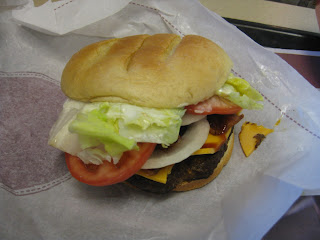 In a pleasant surprise, I found the sandwich overflowing which vegetables, which were crispy and fresh and added a nice zest to the sandwich. All of the components of the mini-salad on top were very complementary, save for the mayonnaise, as I will explain below. 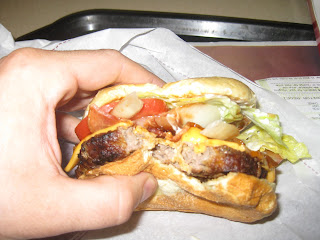 The BBQ sauce that differentiates this burger from the already-reviewed, adjective-less BK Chef’s Choice burger was great. It was exactly the same kind that is already put on the classic Rodeo Cheeseburger, slathered on and heated to a delicious smoky flavor. It was one of the most intense flavors throughout the eating experience, and made the mayonnaise seem redundant because it was impossible to taste it. Well, it seemed to make eating the burger a lot less messy, for whatever that’s worth. 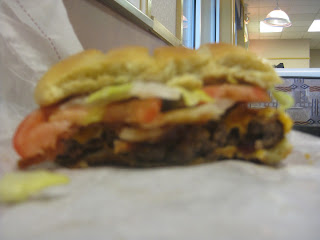 The meat of the sandwich also earns praise. I don’t really know my Angus from my Premium Ground Chuck patties, but I would give BK the edge with its 5.5 oz. slab of flame-broiled greatness. Similarly, be it Applewood, Hardwood, or plain ol’, the bacon was crisp and always flavorful. 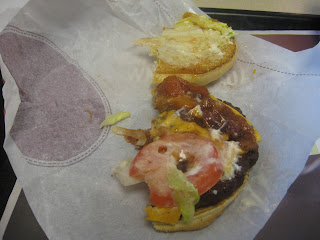 After all was said and done, the royal burger had me pinned to the booth. All the toppings and flavors, combined with the heavy hitting beef patty, had left my stomach catatonic and my taste buds satisfied. I found it hard to imagine eating the full meal with fries…but that might just be because I’m getting old and can’t keep up with you young whippersnappers and your eating contests these days. Despite my high hopes, I wasn’t even able to review the exciting new product offered on the placemat: the promising Oreo Brownie Sundae. 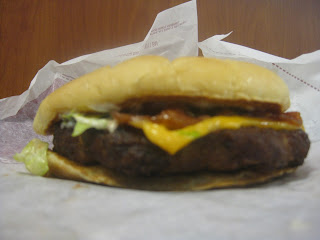 In hindsight, I was almost surprised that I wasn’t asked whether I wanted my burger rare or well-done, as it was easily as robust as similar offerings to be had at “sit-down” chains like T.G.I. Fridays and Chili’s. After I remembered where I was, and snapped out of my reverie, I gave the sandwich 3.5 stars. 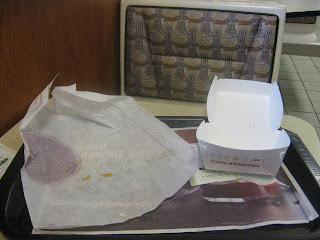