Burger King has spent the last year throwing countless items against the wall and hoping something sticks.  Countless products have been thrown out each season which has to be a logistical nightmare for both suppliers and employees.  I can’t imagine telling Percy that he has to learn thirteen new items at his next shift. Well we’ve entered the new spring menu at BK and one of the stand out items we took a look at was the Chipotle Whopper.  With thick cut bacon, pepper jack cheese, spicy chipotle mayo, and caramelized onions riding the whopper patty like a horse drawn carriage, this Whopper remix had the makings of something special. 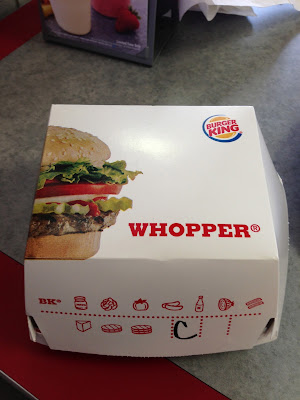 After ordering, the employee was flabbergasted and brain farted for a solid minute trying to find all of the new items on the cash register screen.  This type of display doesn’t exude much confidence to the consumer throwing down his hard earned cash.  Wasn’t sure I was gonna end up with a Carmel Latte or a Chipotle Whopper. 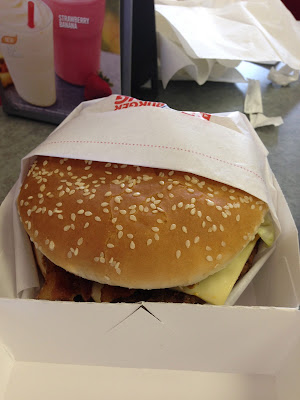 After opening up the box to reveal that patented flame broiled smell that you could smell in the middle of carpet store, I was borderline astonished that the whole entity seemed to be in place.

Burger King’s Whopper is a little different than most sandwiches in the fact that they go for diameter not thickness on the their patty.  While other burgers loaded with toppings end up having a Leaning Tower of Pisa kind of feel, the Whoppers seem to have a firm solid relationship with gravity.

I think BK might have been tipped off that we were food critics (loosely used term), because in all of my days, I have never seen a burger placed together with such care and gratitude.  The bacon was laid to care with the serenity of someone playing Jenga, the tomatoes were nestled together like carolers on brisk Noel eve, while the cheese was angled just so that if I pulled out my protractor I might have been able to get a 45 degree reading.
This Whopper had some quality taste.  The caramelized onions were sweet and succulent, the chipotle mayo had a nice buzz of zip, while the bacon, cheese, and meat combo had that patented smokey flavor we all hope and dream for at the king of burgers.  Gotta give the Chipotle Whopper a solid 3/5 because it had a great flavor harmony, but the after effects that wrecked my stomach for the rest of the day couldn’t be a non factor.  Be sure to check out the TenderCrisp Chicken variety if that gets your motor going. 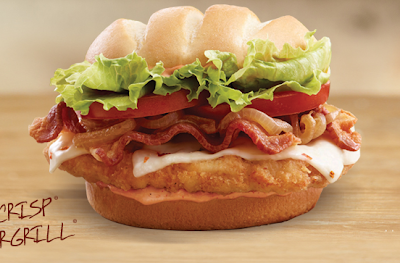