I’m beginning to think the new BBQ Angus is just a ploy by the fast food giants for me to waste gas. Another failed attempt led me to Arby’s®. A sandwich that comes and goes from the menu like Oprah’s waistline, the Chicken Cordon Bleu sandwich is Arby’s® take on a classic French dish. It appears that the sandwich also serves for great foreplay. Take a gander at this:

That commercial holds nothing back, I wonder if an older gentleman might need some Arby’s® Sauce to get his ten gallon hat logo elevated like that. Just remember to think Arby’s come birthday time.

The original is not traditionally in sandwich form and consists of a piece of chicken rolled up in ham and cheese. Meat, wrapped in meat, wrapped in cheese. Sounds like my kind of meal. But what we have at Arby’s® is a rather simplistic vision of the French classic. 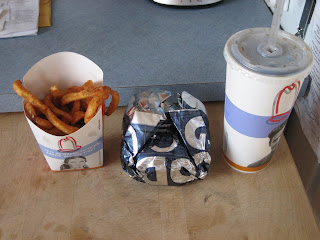 A run down of the layers includes lower bun, fried or grilled chicken patty, freshly sliced ham, and then a melted layer of Swiss cheese and mayo, topped off with the other half of the bun. 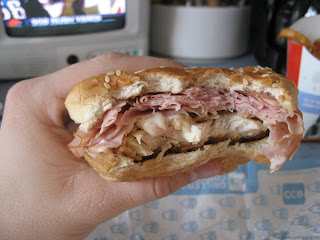 I’ll never get over the height, girth, and magnitude all fast food posters give their sandwiches. I have to admit that food modeling is a job field to get into. From what I understand the only rules the FCC mandates is the usage of the normal ingredients received upon purchase. Folding, pumping, bolstering, angling, glistening, and shining are all fair game. These types of tricks fool me every time. What seemed liked a glistening temptress always ends up being a condensed and flaccid shell of its photographs. This battle is kind of like fighting city hall, you just can’t win. 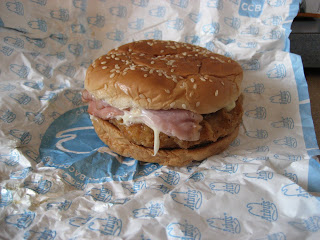 I’m to the point where I no longer expect the photo, but begin visualizing what the sandwich really looks like. If you think I’ve gone off the deep end, then you’re right.

Regardless, I got this baby in my hands and it was still pretty robust despite having the height of Tom Cruise instead of the poster’s LeBron James esque promises. I have to be honest; I’ve never tried the traditional version of this sandwich so I was a little weary of the ham and chicken combo factor. It sounded like a blind man’s peanut butter and jelly. But I have to say that the two meats compliment each other rather well. Arby’s® slices their own deli meats, so the ham was relatively fresh feeling and the chicken breast had the perfect combination of tenderness and crunch.

I have to say that I was not a big fan of the melted cheese and ice cream scoop portion of mayonnaise on top of the sandwich. The two seemed to come forged together, inseparable at best. I attempted to take off the top of the bun and snickerdoodle off some of the mayonnaise, but I found that I couldn’t distinctly tell where the cheese began and the mayo ended. 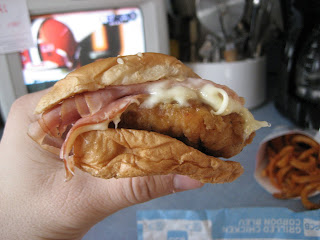 Regardless, the sandwich was still enjoyable. With the mass amounts of meats and cheese it left me rather full and satisfied. If I could go back I’d tell them to go light on the mayo, maybe a dollop instead of a backhoe sized portion. I’m going to give the Arby’s® Chicken Cordon Bleu a 3/5.

Plenty of stuff on the way from g&gg including Subway’s reprise of the Buffalo Chicken sub, and Pizza Hut’s, The Natural. Keep tuning in, you won’t go hungry.