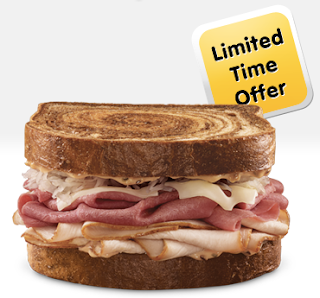 Arby’s recently released the Super Reuben as a promotional sandwich in their Market Fresh Sandwich line.  The Super Reuben is a simple enough concept; their standard reuben plus some turkey.  Turkey, however, does not come cheap and the price of this sandwich is more than a matinee at the movies.
Despite the utter shock at the pricing scheme on the promo banner, conveniently placed at the entrance, as if to give you enough time to bail, I approach the counter and blurted out my order.  One of the repeated themes of fast food promotional items is a poorly trained staff.  Its not the staff’s fault, it seems fast food franchise owners favor the “trial and error” technique over the “30 second rundown” technique.  Naturally my order was misunderstood, but thankfully I saw that the order accuracy screen said “Super Roast Beef,” I may have over looked it had it not been accompanied by a reasonable price.  I attempted to clarify and received a blank stare in response.  Fortunately the shift supervisor was able to step and correct the order.  This brings up the importance of naming your gimmicks appropriately.  An inside source tells me that the original name of this sandwich was the Uber Reuben.  This would have avoided any “super” sandwich confusion. 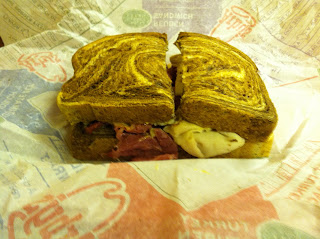 The sandwich was rather large, it did not seem that they skimped on the corned beef to make room for the turkey.  Arby’s corned beef was actually surprisingly tasty, but the turkey was very average when consumed solo.  It gets hidden well in the huge sandwich that I didn’t care.  Toward the end of the sandwich I could feel hungry losing the battle and satisfaction gaining control of the throne.  The only bad thing was that the bread was not “warm” or “toasty” as the marketing claims.  A reuben at a real deal deli is pressed or grilled, this reuben was on softy floppy bread. 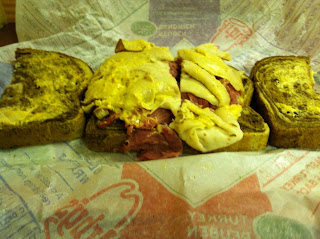 I’ve been told by the above “inside source” that not only is the bread supposed to be toasted, but its supposed to be double toasted on one side with the toasted sides facing out!  Based on the sandwich I received the Super Reuben gets a 3.0, but toasted bread would have put it over the top.  A poorly trained staff prevented this sandwich from attaining Fast Food Geek glory, and priced at $5.99 for just the sandwich and $7.99 for the combo (paying $1.10 for the addition of turkey) I’m not sure if I’d be in a hurry to rush back for another.
3/5
Mike 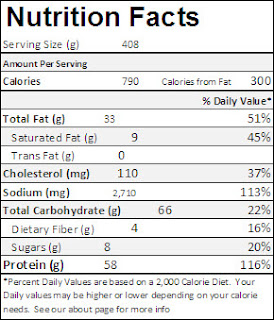