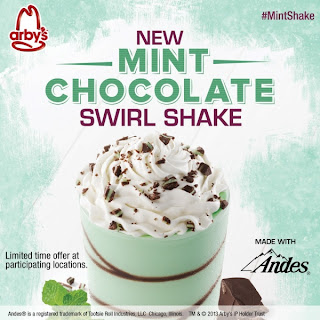 While we’re a little late to the party on this one, we were able to snag the Mint Chocolate Swirl Shake on it’s victory lap. Loaded up with morsels of Andes famous mint chocolates, decadent mint infused creamy icy goodness, and that artisan swirl that could only be perfected by an Arby’s employee, the shake has a lot going for it.  But how does it compare to its arch nemesis Shamrock Shake? 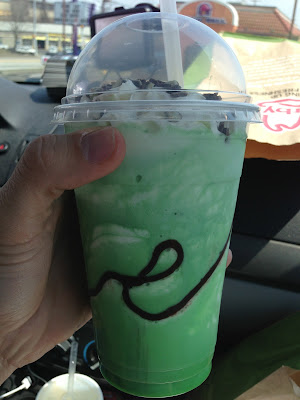 Grabbing a hold of this green meanie, it resembles the Shamrock at the basic level.  There are slight differences, especially with the candies permeating the whipped cream, and that wondrous “how do they do it?” fudge swirl that only sees the light of day thanks to the crystal clear beverage container that screams quality. 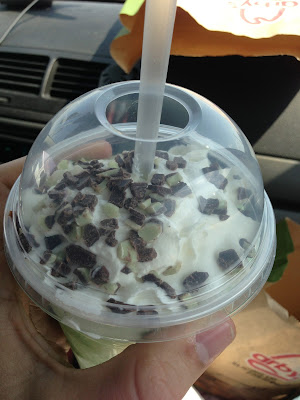 Gulping down, it’s quite easy to notice how smooth, creamy, and minty the shake tastes.  Arby’s shakes have a way of tasting very rich, yet not in an over the top way.  The ice cream is flavorful and mint syrup was clearly evident but didn’t taste at all “chemical” like the Shamrock has the tendency to do. 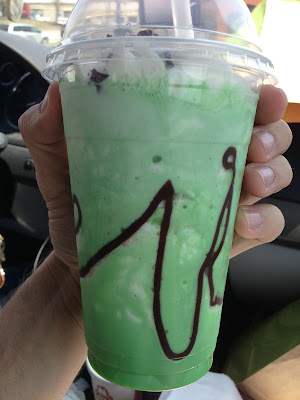 While it would have been even better if the Andes candies were mixed throughout the beverage instead of just tossed on top of the whipped cream like an after thought, they did provide a nice little incentive to finish the beverage so you could get to the prize at the end.  Although it probably won’t ever get the publicity of the Shamrock Shake, Arby’s Mint Chocolate Swirl Shake has a more authentic flavor and a branded candy sponsor to help it’s cause. My fiance is a mint chocolate chip connoisseur and she prefers Arby’s offering over to its more popular rival.  Just try to share it with someone because it has a less than stellar nutritional resume.
Arby’s Chocolate Swirl Shake (20 oz):
Calories: 750
Fat: 26g
Taste: B
~Fast Food Geek