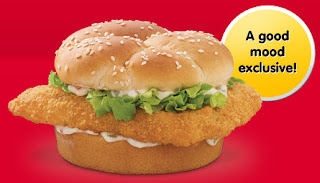 It’s no secret that Fish sandwiches at Fast Food restaurants are an after -thought. Most don’t even bother wasting menu or freezer space when it isn’t Lent—the time when Catholics and non-Catholics will eat fish sandwiches from almost anywhere (i.e. fire houses, school gyms, doctors offices, barber shops) Arby’s has decided to jump ahead of the pack and unleash their take on the no frills sandwich a month and a half early. 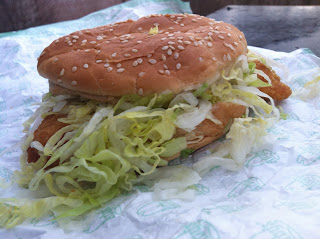 All fried fish sandwiches start the same, breaded fried fish and tartar sauce. From here, the remaining ingredients vary from place to place but are limited to some combination of the following: lettuce, tomato, and cheese. Arby’s keeps it simple and cheap by selecting only lettuce from the ingredient options. 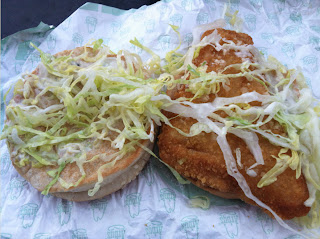 The sandwich seems meatier than most fast food fish sandwiches, utilizing a substantial fillet of fish. It was much more filling than McDonald’s Fillet-o-fish offering, which has a tiny perfect square patty. Arby’s took time to make sure their frozen fillets at least resembled the shape of a fish fillet. Their fillet was actually very plump and did not taste soggy. It has decent substance to it, rather than a really soft bite. The main thing that holds this sandwich back, as usual, is the subpar lettuce. Give me romaine, or at least some sort of leaf lettuce; the shredded lettuce just feels and tastes very low quality. My sandwich also had a noticeable fried taste to it, but I’m sure that’s not consistent with every sandwich. 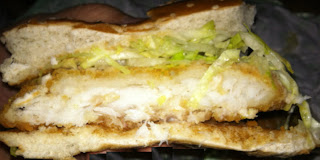 One final negative is that Arby’s does not identify the fish anywhere. I haven’t been able to locate any promo material that claims what kind of fish this is, which is very unsettling. You may remember the fish sandwich that Wendy’s released in the midst of their “you know when it’s real” campaign last year. They claimed their fish was 100% north pacific cod. Sure it was farm raised and not wild caught, but at least they let us know what we were eating. [EDIT: Arby’s was gracious enough to notify us that the fish in their sandwich is Alaskan Pollock.]

Because fast food fish typically stinks, I’d say Arby’s fish sandwich is the best out of all the major fast food fish sandwiches. Having said that, It still isn’t reason to stop going to your local nail salon for your favorite fish fry sandwich during the Lenten season. 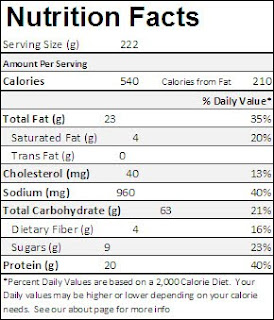