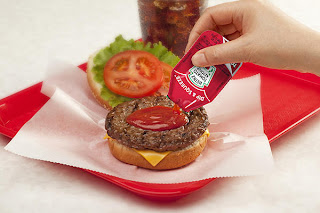 While burgers, fries, and chicken are the cardiac kids of the fast food industry. Their greatest compliment condiment would have to be ketchup. Either on the sandwich as a lazy substitute for a sauce or as dipping and dunking splash zone, ketchup was been united with fast food since the dawn of time. If you’re anyone who knows anyone’s cousin, you know that Heinz is the be all end all of catsup.

Dishing out 56 varieties that no one else seems to care about, that 57th is the one that people fawn over. Good ol’ tomato ketchup. Coming in anything from squeeze bottles, to those pesky glass containers that made you embarrass yourself at Denny’s whenever you cursed to the high heavens, to the those tiny ass packets that don’t even hold enough to drown a cytoplasm, Heinz Ketchup, in a way, is fast food. 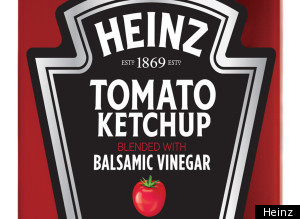 Despite the purple and green ketchup catastrophe of the early 2000’s Heinz has decided to go gimmick once again with their new Tomato Ketchup blended with Balsamic vinegar. Balsamic, that salad dressing you saw your friends dad eat in the 90’s but never caught on until now, was considered quite the dark horse to be combined with ketchup. One would have thought a relish, mustard, or taco sauce combo would have reared their ugly head first, but hey we just like to see people take risks. Plus we’ll try anything twice. 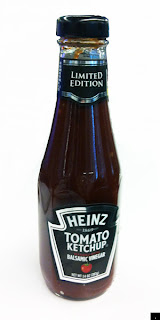 Making the ketchup have a dark brownish tint and bottled with a classy, refined appeal, the Pittsburgh based company decided to start distribution for the month of November solely through their Facebook page, until select stores would get their hands on it in December. Sales started November 14th, and wouldn’t you know it, the site melted down, and orders couldn’t be placed for hours. Despite the hiccup, which seems to happen to seemingly every product launch, the site is back up and taking orders currently. Selling for $2.50 a bottle with free shipping and an available .25 cents discount for being a Facebook fan, we suggest you give this dark duchess a try. After all its ketchup’s first gimmick in a decade and we had to report on that.

According to Huffington Post, the tomato based paste is quite tangy, and adds a verbose flavor without alienating the core ketchup lover. Our bottle is on it’s way, and we’ll let you know how Ketchup’s mistress stacks up! So stay posted you knuckleheads, until then FFG out.