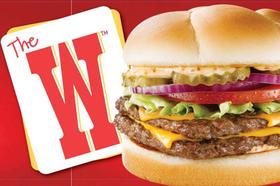 We’ve been hard at work over here at FFG trying to bring you up to date reviews, and opinions on the latest fast food releases from the cellulite conglomerate connoisseurs that rule this dangerous and deep fried world we inhabit. So much so, that we have run out of ideas like the Simpson’s did 8 years ago.

While waiting for the next fast food fairy-tale to be released like a rabid Harry Potter enthusiast, I happened to be  in range of a newly re-designed Wendy’s. With rumors of the Wendy’s “W” Burger swirling about like fumes from the near by US Steel Mills, I decided to infiltrate the premises to catch a glimpse of this warlock. After carefully circling the drive thru menu I spied with my overweight eye that the Wendy’s “W” Burger was indeed released to the public. I swung into a parking spot and strolled right in for a trans fat fiesta. 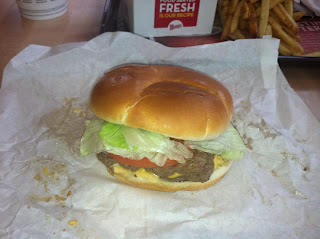 Upon entering the building, I was immediately befuddled. The menus were electronic, the numbers had been changed, and it didn’t smell like someone just cleaned up a murder scene. After finally figuring out which way the line worked, I reached the cashier and ordered myself a “W” Combo, a #6 if you will. The weirdest thing for me is that the #6 used to be the Spicy Chicken sandwich meal, which I ordered every trip to Wendy’s for 8 years straight in my youth. As I took a gander around the building, I was awestruck with the glitz and glam of this cholesterol dispensary. Its as if HGTV filmed a reality TV show to redesign old run down fast food parlors. I will have more on the redesign later, but until then lets focus on the BEEF. 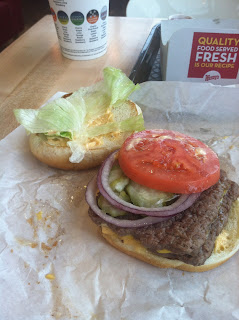 I sat down at a window seat, and anxiously dug in to my “W” Burger. With 2 G of Trans Fatty Acids I was sure to enjoy. For $4.99 this combo seems like a steal. Girthy, but carefully crafted, my toppings were all there, and in abundance. The “Signature Sauce” they have been touting was rather unflavorful. Tasted like a cross between thousand island dressing and elmers glue. Would have preferred the standard Mayo. The beef patties were pretty sizable, and they were cemented together with a slice of cheese. The lettuce was far less depressed than usual, and the pickles were a nice little touch. The “W” didn’t stand a chance. Before I knew it I had already begun the internal struggle with whether or not I should order more. 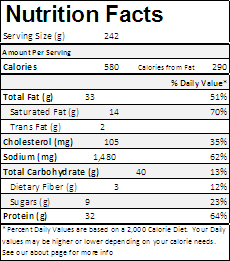