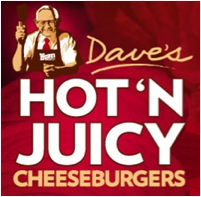 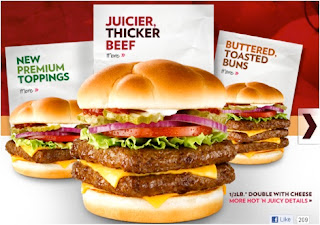 Wendy’s has done the unthinkable; they changed their standard “old fashioned” burger.  So what have they changed?  They claim to have juicier, thicker beef, new premium toppings, and a butter toasted bun.  They’ve also been given a rather uninspired new name “Dave’s Hot and Juice Cheeseburgers,” seemingly including Dave as to signify that the legend himself would approve of these new burgers.
Lets start with the toppings.  The website claims the new burgers have crinkle-cut pickles, sweet red onions and thick hand-sliced tomatoes.  Interestingly absent from this list is an upgrade to the lettuce.  Wendy’s has somewhat became known for having the worst pieces of lettuce possible on their sandwiches—somehow they always only have pieces that are completely white or completely soggy.  As for the remaining ingredients the upgrade to red onions definitely gives the sandwich a more “quality” taste and appearance.  The pickles are also noticeably better than the previous pickles which seemed more of a obligatory after thought than a topping.  The tomatoes seemed exactly the same.  Over all the toppings do improve the quality of the burger but a boost in the lettuce department would really go a long way.
Another upgrade that attempts to signify quality is the butter-toasted bun.  This is very minor change, but does seem to give the bun a little more of a substantial feel.  In the past, Wendy’s buns were at risk of being too soft and now feel like they have a little texture.  Thankfully they don’t seem to go over board on the butter application.
The last update is to the patty itself.  What perplexes me is that the patty appears to have the same length and width yet is noticeably thicker.  The burger is still called a quarter pound, so I’m left wondering what light weight material has been added to the meat blend to allow a bigger patty without affecting the weight significantly.  All conspiracy theories aside, the patty is definitely an upgrade from the previous version.  The burger tasted slightly salty when sampled by alone, but overall it had a good taste with the rest of the sandwich.
This is the second revolutionary change for the franchise in a year and the changes are definitely paying off.  A combo meal consisting of the fresh cut fries and Dave’s hot and juicy cheeseburgers would definitely beat out a meal consisting of the old burger and fries.  Go out and try one, but bring your own lettuce.
3.5/5 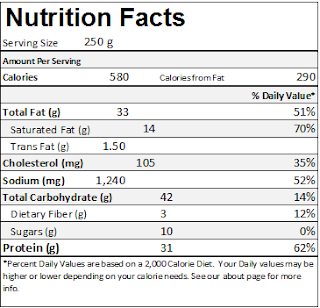