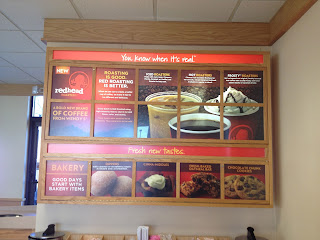 Sometime in  late 2010, Wendy’s took a cold hard look in the mirror and said, we can do better.  Unlike most middle aged, overweight, unemployed, and dysfunctional humans who would make drastic changes, crash diet, alienate all of their family & friends with a “makeover” and start using unrealistic words like “homeopathic” and “transcended” Wendy’s decided to take a consistent and segmented approach and change one section of their menu at a time. And instead of immense changes that horrified your grandparents, Wendy’s took their once consistently selling staples and decided to alter and tweak them.

Last November brought the “Fresh Cut” Sea Salt fries, which took Wendy’s already very underrated fries and added taste and seasoning, while not a complete overhaul, something that made the product that much better. This year saw a transitional phase from Classic Cheeseburger’s to Dave’s Hot and Juicy Burgers, reviewed last week by Mike. Next year will bring changes to the uber popular chicken line, and currently Wendy’s is taking their infant breakfast offerings and trying to bolster it with new coffee lines and bakery items that are attempting to cut into semi formal bakery locations such as Panera and other traditional fast food foes like Dunkin’ Donuts. 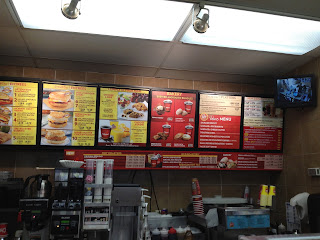 On a crisp, unseasonably nice fall Sunday morning, my girlfriend and I went into Wendy’s with the distinct plan of trying as many bakery items as possible.  Armed with bogo coupons and a youthful exuberance, we scanned the complex breakfast menu, that most likely requires a Bachelor’s degree to decipher properly.  After the winter solstice came and went, it felt like we were finally ready to order, although the confusion and frustration had only begun. Wendy’s now offers Cinna-Middles (essentially a cinnamon roll) in either traditional or chocolate, doughnut like Dippers coming with either caramel or strawberry dips, a Cinnamon Crumb Muffin, and old offerings including a chocolate chunk cookie and and a faux healthy oatmeal bar.   Ordering a Bakery Multi-Pack, which is basically ordering 4 breakfast items, turned into a three ring circus.  First of all the term “Bakery Multi-Pack” was a foreign phrase to the employee.  We might as well have asked for plutonium or magmar.  After a three minute conversation with management in the back, it was determined that the order could proceed. 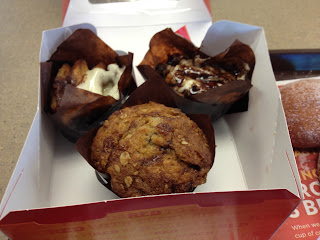 After many apologies from Ryan,the mystified employee, who claimed he usually just works nights, we finally got our Cinna-Middles (og and chocolate), Dippers with both caramel and strawb dip, and a Cinnamon Crumb muff.
First were the Dippers.  Designed to act as a doughnut substitute, the Dippers were essentially puffy mounds of dough laced, caked, and coated with granulated sugar.  The dip dogs tore apart with relative ease, and were flaky inside.  The caramel dip essentially was like an overproduced big-budget summer blockbuster, all of the show none of the go, tasting like nothing.  Quite peculiar considering caramel traditionally has a rich and fulfilling flavor, but nonetheless disappointment city.  The strawberry dip was all the caramel dip was not.  With a vibrant and tangy flair, the strawberry dip pierced my tongue like a taste torpedo.  The Dippers get a 2.5/5. The granulated sugar coating, sheds more than your uncle’s cat and makes portability very limited. But do yourself a favor, skip the zero (caramel) and get with the hero (strawberry) when it comes to the dip.
Next came the Cinna-Middles. Wendy’s wanted to skip all of the riff raff outside layers of a traditional cinnamon roll and skip right to everyone’s favorite part, the middle. Somehow along the way, in Wendy’s eye, the best part of the cinnamon roll must be a grease pit, rinsed in a gurgling murder scene of cinnamon. Overloaded with icing richer than Oprah, and grease that could have taken away that annoying squeak your front door makes, we were completely taken aback.  While the original Cinna-Middle is somewhat redeemable, the chocolate variety almost soaked a hole through the table. Portability is a joke, unless you carry an umbrella and a wet suit in your car. I’ll give the Cinnamon Middle a 2 because it was at least visible in photos, unlike the swampy and artery clogging chocolate, that gets a 1/5.
Last of the bakery items was the Cinnamon Crumb Muffin.  Finally, Wendy’s steps to the plate with an item you could get at the drive thru and eat on your way to work without needing the Brawny man riding shotgun.  The muffin was light and moist, with a slight crunch produced by the flaky topping and slight granola presence swimming throughout. Despite being completely cinnamoned out from my twenty minute swimming lesson with the Cinnamon Middles, we were very impressed with the bakery quality of the muff.  The Cinnamon Crumb Muffin earns a highly respectable 3 star rating. 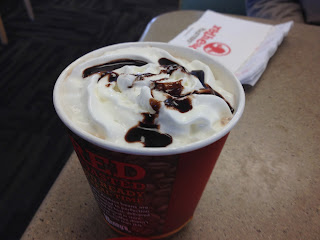 Along with adding the bakery section, Wendy’s has upgraded their coffee to “Red Head Roasters Coffee” which is being marketed as a representative of redheads in society, born to be bold.  Every bean is red roasted with high intensity heat to seal in the intense flavor.  Wendy’s is even giving away a free coffee, in either iced, hot,or frosty variety every Monday until December 10th, to help you get over the depressing notion that it’s the beginning of another long work week. I decided to add on a Frosty Roaster to our order.
The coffee drink, is somewhat confusing and misleading.  Touted to be their new coffee, topped off with a “Frosty swirl” and either mocha or caramel drizzle.  I’m still bewildered by the term “Frosty swirl” because it would lead most to believe that the beloved ice cream treat is somehow incorporated.  But the glitz and glamour provided by the capital “F” turns out to be nothing more than whipped cream.  This F also must stand for fraud.

This drink is designed for the true blood coffee drinker, for underneath the cream and glorified chocolate syrup (mocha) is black coffee.  Though I’m not the biggest coffee drinker, I did appreciate the smell and taste of the coffee, and the whipped cream despite being hyped as more, tastes nice and creamy along with the mocha syrup.  I’ll give the Frosty Roaster a 2/5, mainly because of the false advertising, but otherwise a decent value.

Wendy’s Bakery Items are clearly a work in progress, ranging from delightful to abysmal.  But I admire Wendy’s giving customers multiple sweet options compared to the other fast food joints who traditionally just offer a single cinnamon roll variant. So if you come armed with a bib for the Dippers, stick with the Cinnamon Crumb Muffin for your commute, and try to stick to one Cinnamon Middle every leap year, Wendy’s Breakfast Bakery items will be able to tickle most anyone’s fancy.
Dippers w/ caramel or strawberry dips: 2.5/5
Cinna-Middle: 2/5
Chocolate Cinna-Middle: 1/5
Cinnamon Crumb Muffin: 3/5
Frosty Roaster: 2/5
~Andrew
@atkpitt12

*No nutritional information available at this time. We will update it when released.