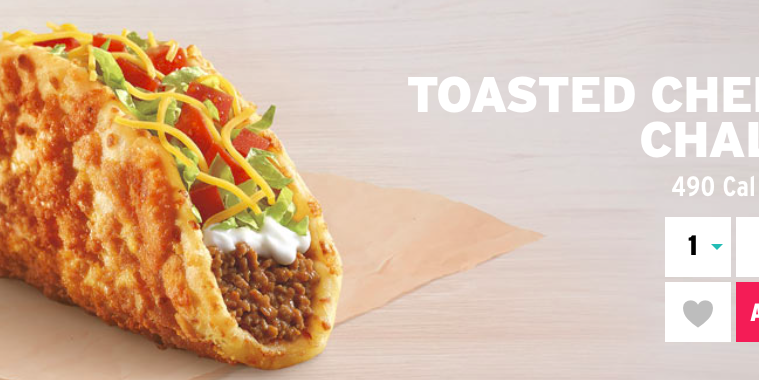 While this isn’t actually a brand new item, we missed out on the hype last time around, so we thought it was time to take on Taco Bell’s Toasted Cheddar Chalupa.

While Taco Bell’s website would rather tell ridiculously long stories that don’t really pertain to the item on the product pages, I luckily found a description tucked away in last year’s press release:

Taco Bell has taken 6-month aged sharp cheddar cheese and toasted it onto the iconic chalupa shell to create a crispy blanket of flavor and texture, unlocking a whole new cheese experience. Like the classic chalupa, the Toasted Cheddar Chalupa is filled with the option of seasoned beef, chicken or steak, then piled with shredded lettuce, diced tomatoes, grated cheddar cheese, and reduced-fat sour cream.

About 6 weeks back, I railed on Taco Bell’s boring new menu and their half arsed attempt at a new product with the Grande Stacker. I had thought the days of innovation and whacky product concepts were gone from Taco Bell, but my faith in humanity has been restored once they brought the Toasted Cheddar Chalupa back to the scene.

Part of a $5 Box that includes a hard shell taco, Cinnamon Twists, and a medium beverage, the Toasted Cheddar Chalupa retails right around $3.89 in my local area when purchased solo. So the box is clearly the way to go.

The Chalupa itself has long been a favorite of mine. Essentially being a deep fried flatbread, it boosts the standard taco into a deluxe experience, that elevates your meal to memorable status. The hearty and thick texture of the flatbread make it feel like you’re eating a taco themed wrap instead of a standard taco. Throw in the crisp nature of that flatty being deep fried and your mouth will thank you.

The Toasted Cheddar Chalupa takes the immaculate standard shell and then toasts cheddar on the outside. There are claims that the cheese has been aged for six months, but I don’t think the average TB customer gives a rat’s butt about that. Some would predict that this simple cheese addition wouldn’t do much to enhance the experience, but for those that reach for the Italian Herbs and Cheese at Subway know just how much these shreds of dairy can do.

Unwrapping the premium foil, we can see that the Chalupa is in one of Taco Bell’s top tier sheaths. At least this time around though, the product strongly resembles the ad materials. When looking at the TCC’s body, you can see that there are waves of cheese baked into the outer layers to varying degrees.

Biting down, there was a cornucopia of textures in my mouth. The toasted cheddar added an extra crispy, crunchiness that enhanced the seemingly unenhancable. The fact that these texture bits are cheese and actually boost the flavor is just gravy on the biscuit. It is hard to truly express the God like nature of this shell without actually eating it. Throw in the warm and saucy beef, sassy sour cream, lettuce, diced tomatoes, and shredded cheese and you get a delectable fast food Mexican treat.

There is something about the umami nature of experiencing a baker’s dozen different textures, temperatures, and tastes at your mouth at once. The Toasted Cheddar Chalupa achieved this for me by taking one of my all time favorites at Taco Bell and making it that much better. This almost makes me forget about the Grande Stacker experience. Almost.

Go get one of these while you can.