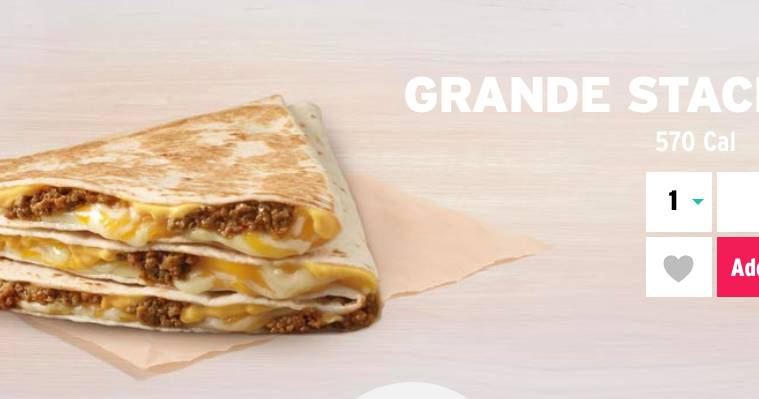 With whatever is left of Taco Bell’s pared down menu, the Grande Stacker is the latest promotional item that we take a look at.

With its meticulous layering, stacking rocks is an exercise in patience, Zen, and stability. Much of the same can be said for the Grande Stacker. How so? Well, you’ve waited your entire life for this moment. That’s the patience part. Once you take that first bite into double the seasoned beef*, you’re sure to find inner peace. That’s the Zen. Not to mention, the Grande Stacker comes layered with melted cheese AND nacho cheese sauce. That’s the definition of stable if we’ve ever heard one.

Based on photos and the over the top description including words such as “meticulous” and “patience”, I had many doubts that this item would come anywhere near the visual that was provided. But that’s why you go and review.

The last year Taco Bell has been slicing and dicing down its menu, claiming that the environment and having one off ingredients for one off items have created an inefficient business model. This has resulted in many unhappy Bell loyalists losing their favorite menu items and the once illustrious menu that included various value menus and seemingly 30 different combo meals, looking rather paltry.

Take the Grande Stacker as an example of what we can expect from Taco Bell going forward. This promotional item contains 4 ingredients, all are of the super basic fast food Mexican restaurant variety. Seasoned beef (2x the amount used in a regular taco), nacho cheese, their shredded cheese, and a burrito tortilla, all supposedly folded meticulously to create a visual experience and then grilled in some form or fashion. Sad thing is that, the visual stack is the only thing that makes this different than any other burrito you can get on the menu.

Then you have to deal with the fact that once you open your Grande Stacker bag you end up with this failed origami experience. It’s a sad state of affairs when it definitely appears as though no one was even trained on how to get the stacker to look anything like the promo materials. Obviously it wouldn’t change the taste you experience, but still this just looks like a punchline.

Despite the mess in delivery, I lathered this “stack” with some hot sauce and still ate it as best as I could. The inner cocoon was just a melty, lava like goo of beef and multitudes of cheese. All of which tasted just fine. But when you’re working with just beef and cheese, there’s only so much that can stand out. A special sour cream based sauce or even some crunchy tortilla strips would have added at least some dimension of flavor. But who knows if those ingredients are still allowed due to their complexity.

Taco Bell’s Grande Stacker displays what we may have to look forward to from the once titan of the fast food creativity. A basic promo item that relies on the employee’s whimsey to produce the gimmick that falls inevitably flat.