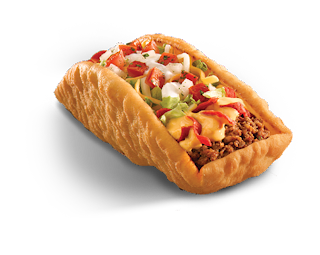 Taco Bell has been boasting their oversized, larger than life fried taco sensation, the XXL Chalupa for seemingly months.  Case in point, it has reached its final days. Whenever Steve, went to a Taco Bell establishment earlier today and was given the cold shoulder due to the XXL being “sold out”, panic set in like the day you showed up to the prom without your tickets.  Had we missed out? Were we going to be left wondering, forlorn for years, maybe even decades, with depression and diabetes wondering what the elusively beefy stallion had to offer? 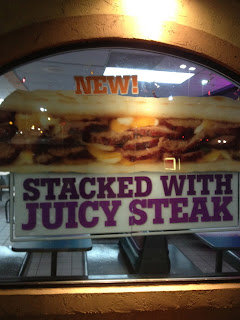 I arrived at my local Chalupa purveyor, after a 30 minute cardio session at my local gym.  Probably not the best idea to walk into a taco bell already perspiring, but I persisted nonetheless.  Parking my car and wandering out into the dark fall night, came across the humbling truth, the XXL poster that had been brandished across the window triumphantly like a noble steed was gone, replaced with this month’s promotion, the Triple Steak Stack.

Although tasty looking in its own right and soon to be reviewed, it just wasn’t the Stack’s time yet, I had larger meat to munch.  Walking into the restaurant, I noticed that the couple in front of me walking in, immediately went into the adjacent restrooms to prepare themselves for their meals. Always a good sign. Wandering around aimlessly, scared and nervous like the time your parents left you at that rest stop in Albuquerque, I panned across the restaurant and saw no signs of an XXL. I felt defeated.

Waiting in the line of degenerates, Wal Mart shoppers, and pre meal bathroom goers, I felt like all was lost. Finally whenever it was my turn in line, I asked Destiny, the loyal empolyee, if they had any XXL’s left.  Her response was a low brooding grunt, followed by a roll of the eyes, followed by a trip back to the kitchen area where she asked the assembly line crew, I mean cooks, if there was any left. As luck would have it, there was a handful remaining. Twas Fast Food Geek reader’s lucky day indeed. 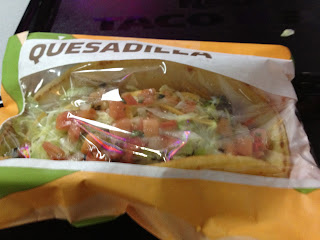 Ordering the beef variety I stood and awaited what I was predicting to be a clumsy, slipshod of a meal.  I’ve heard rumors coming from all over the world wide web and others that the XXL was a sloptastic, half dozen napkin affair.  When I got my XXL in its “quesadilla” bag, I couldn’t have been more surprised. 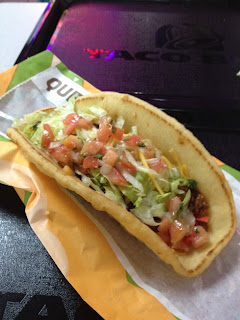 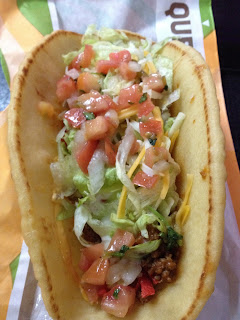 The XXL Chalupa came as close to advertised that I have seen almost any fast food gimmick.  Shaping, toppings, and presentation were all there in flying colors. My theory is that the Taco Bell employee must be at that pinnacle area of the bell curve all TB employees go through, where on one side you either are too new to be any good at making the food or  the other side you’ve been there too long to give a shit.  Right in the middle is just right. 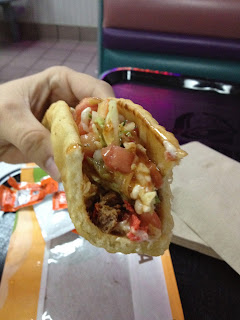 Biting in, I was astounded by the rich taste of the fried chalupa shell, the vivacious portion of double beef, the fresh tasting tomatoes and onions, and the crunchy chomp the red tortilla strips exhibited.  The nacho cheese, sour cream, and three shredded cheese blend was a perfect accompaniment, not overpowering yet not unnoticed.  The XXL was quite gurthy, about the square foodage of two chalupas I would estimate.  A satisfying size for even the most brazen eaters.  I was officially visiting Tacotopia 2011. 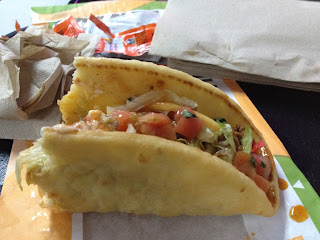 The XXL Chalupa gets a 4/5 star review from me, for its great taste, epic presentation, and mystical nature. Can’t complain about much other than the fact that it packs 700 calories and a whole gram of the dreaded death crystals (Trans fats), so it isn’t exactly something you can eat regularly and fit into those hipster skinny jeans your kid brother tries to wear.

So if you’re lucky enough to find an XXL Chalupa, snatch one up and cherish it like there’s no tomorrow. Because there just might not be for this fried feast. 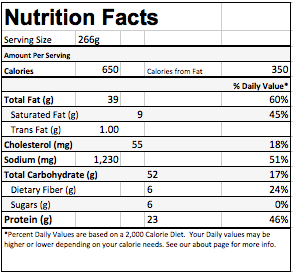