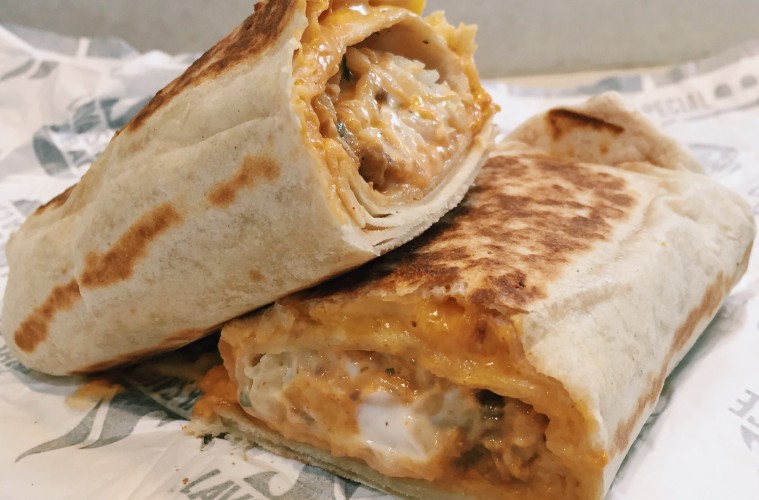 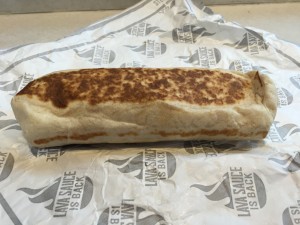 When news broke that Taco Bell released a Volcano Quesarito it set off of all sorts of alarms at the Fast Food Geek headquarters.  It initiated the Lava Sauce phone tree which was put in place to spread the news as fast as possible if ever it returned to menus.  To the type of people that call a fast food blogger their friend, lava sauce had reached full blown cult status.

For the uninitiated, Lava Sauce is a creamy mayo-y spicy sauce.  Originally made famous in their Volcano Taco before it completely infiltrated every section of their menu.  For reasons no one can explain, Taco Bell removed it from the menu breaking the hearts of many.  According to Taco Bell, the Lava Sauce was brought back by popular demand, which I believe, despite the lackluster turn out for this Facebook group.  As Taco Bell often does with its limited time featured items, they shoved it in a caloric nightmare of a box with 15 other items.  I ordered mine a la carte. 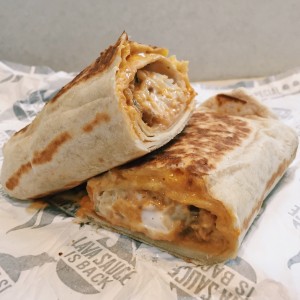 The Volcano Quesarito essentially adds lava sauce to the already existing menu item.  As you’re probably aware, this seems to be loosely inspired by the not-so-secret Chiptole item.  The concept is simple, yet utterly confusing at the same time. The recipe is as follows:  make a quesadilla, then use that to make a burrito, then put in your two-weeks notice, then move back in to your parents house.

The good thing about the Volcano Quesarito is that its actually not enormous.  One reason I’ve never tried the OG from Chipotle is because it is an absolutely GUT BUSTING Frankenstein of a creation.  It just always seemed way too over powering.  This is in a much more reasonable range–in fact taco bell suggests you eat it with a few other things. 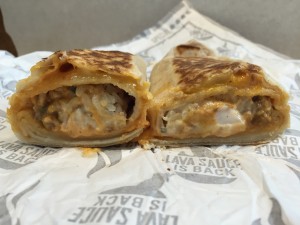 Based on that ingredient list, we basically have three sauces going on here.  This is where results are going to vary big time.  This much liquid means you need someone with a steady hand assembling your Quesarito.  The sauce gun can get away from your burrito chef in a hurry.  Fellow lava sauce lover and non-reader-of-this-blog friend of mine Tom ran out as soon as he received the call today and reported back that his quesarito was actually under sauced and undercooked.  Mine was actually grilled to perfection, but had slightly more sauce than I would like. 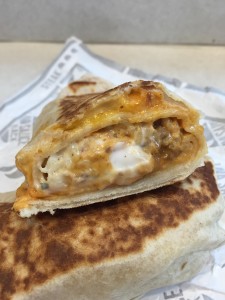 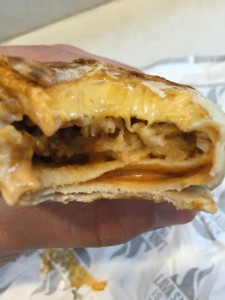 As far as the taste, this is definitely on the spicer side of fast food spicy food options.  Typically fast food commercials for spicy items involve someone’s face turning cartoon red and steam coming out of their ears.  Then you go and the “5 alarm” whatever it is isn’t spicy at all.  Not the case with the Volcano Quesarito.  You can definitely feel the heat, I even hiccuped at one point because of it.  I love spicy food so this was right up my alley.

In typical taco bell fashion, this is meant to be a component of an order.  At 700 calories and a whopping 38 grams of fat for the beef variety, you really have to tighten up the rest of your order to avoid going completely off the rails.  I continue to be a huge fan of the Lava Sauce, but maybe next time I might hold the sour cream to ease up a bit on the moisture.  Overall, this is a welcome addition, even if its just a limited time offer.

I leave you with this final parting image: 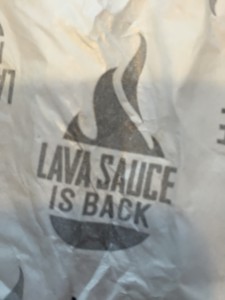 Lava Sauce is Back!