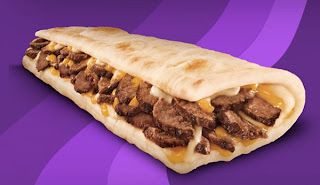 For years Taco Bell has been using every trick in the book to bamboozle and befuddle customers into misguided choices. From using choppy “Vote for Pedro” Spanish and the days of the talking rat (dog), carne asada has been a staple on the menu for years. However, in the recent years, the Bell has started to call their strips of meat the all too traditional “steak” term.

For this month’s promotion, Taco Bell has thought outside of the proverbial bun once again and started stacking the steak.  Simple premise here, get a 9′ flatbread…load it with that infamous three cheese blend we always hear about but are never privy to the three types of cheese, and then load it up with an arbitrary amount steak strips and call it triple the amount they normally would. Actually if you look at the fine print, the stack packs three times more meat than a steak taco. Such a random item to compare to considering its not flatbread, and not really in the same menu section, but whoever said this stuff had to make any sense?
Game planning by looking at the morning scouting report, aka the nutrition facts, it looks like this item packs enough sodium to clear your sidewalk after a snowstorm.  I honestly haven’t seen this much sodium since the Truman administration.  Also greasing the grinder’s gears is a slippery half gram of trans fats. It appears that the fast foodies lube things up with salts and trannies in place of a healthier alternative just to get these things out the door.
Intoxicated with Holiday spirit, I decided to go 10 steaks a’ stackin’ during my lunch break.  The local Taco Bell is infinitely and inexplicably popular. Packed at lunch hour with a drive-thru sporting a ten car pile up, I braved the elements and made my way into the establishment.  It was one of those “we’re so understaffed the middle aged, mustached, manager has to fill in on register” kind of days.  After dealing with the classic adolescent in front of me who wanted a bean burrito plain without the beans and mysteriously not in school on a Monday, I ordered my stack of steak. 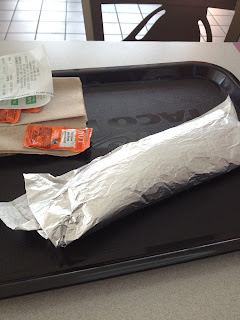 Wrapped inconspicuously in an unmarked gray foil, it looked like I was about to unwrap a government conspiracy compared to a gimmick the company was proud of.  Someone really dropped the ball and mailed in the promotion for this item. 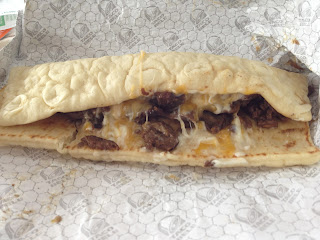 Unsheathing the beast, the first thing I noticed was that it was piping hot, and the three cheese mystery was ooey and or gooey all over the place. The next thing was hard not to notice was that the flat bread was emptier than the upper deck at Pitt game in the 4th quarter.  Whole areas were devoid of steak, although it did seem like it was a distribution error more than anything.  The middle was packed jacked city. 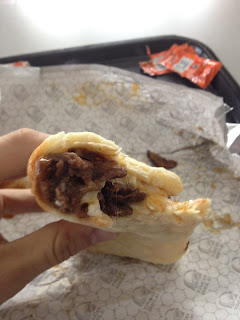 Holding the creation in my hand was a bit of a struggle.  I undoubtedly looked like a cross between a first time parent holding their kid and a fish out of water.  Imagine for me, if you will, a Twizzler’s Pull and Peel.  Now imagine holding one up in the air from the bottom, and the inevitable flop over that will ensue.  That’s what it was like trying to hold the Triple Steak Stack with one hand. It’s awkward length and flop factor made it so hard to handle, at one point I almost completely fumbled the sog log onto the ground below. 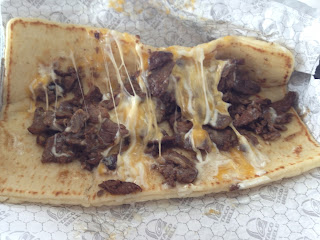 Biting into it, I was immediately reminded of a “Steak Um”.  Basically a whole satchel of steak got black out drunk, and married a big, uneven coating of cheese and forgot to sign a pre nup.  If anything the taste alone was too much, and quite rich, but after I loaded up the creation with some Taco Bell Hot taco sauce, a more even keeled taste emerged.  The steak was actually somewhat thick cut for fast food steak, and by that I mean that it was slightly thicker than a sheet of paper.  Despite the sandwich being looser than housewife of three at a bar on Tequila Tuesday’s, the melty cheese and high quality steak titillated my tongue. 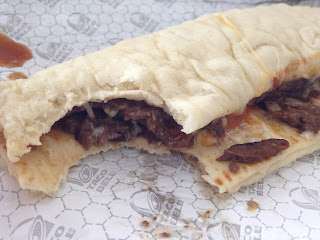 I must note that this sandwich caused a distinct food hangover. Including a sharp headache, fuzzy vision, and my stomach feeling like there was more grinding going on than a middle school dance when Usher is on. 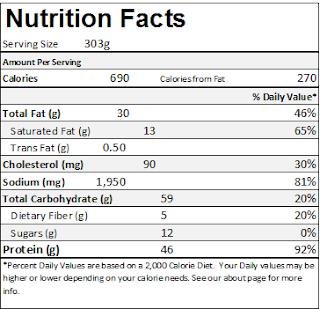