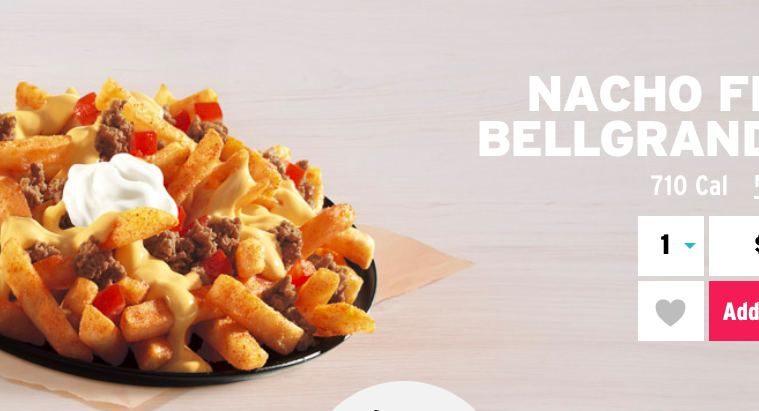 With Taco Bell kitchens bursting at the seams with ingredients, fan favorite items like their take on fries, Nacho Fries, are relegated to limited time only status. They seem to come and go about three times a year, so let’s take a look at their loaded fry creation, the Nacho Fries BellGrande.

Who comes up with this stuff anyway? It turns out some “genius”, back in the kitchen does. Recently, they got the bright idea to take Nacho Fries—which are crisped to perfection and dusted with bold Mexican seasonings—and load them up with a hearty portion of seasoned beef, diced tomatoes, reduced-fat sour cream and that warm and magical nacho cheese sauce. They’re called, appropriately, Nacho Fries BellGrande.

The Nacho Fries from Taco Bell have been coming and going for a few years now. The base fry is dusted in seasoning that Taco Bell claims as bold and Mexican. To me, it always has tasted like seasoning salt with a slight fajita flair. Regardless they’ve always been really tasty and they come with nacho cheese dipping sauce by default, so it’s really hard to complain.

Side note prior to getting into the review, I had a pretty horrendous ordering and receiving process with my local Taco Bell for this post. I ordered from the mobile app and picked up through the drive thru. Let’s just say that the drive thru line took over a half an hour and I ended up getting the completely wrong order handed to me. Luckily the Nacho Fries BellGrande coincidentally was in this order as well, otherwise this review would have been further delayed.

The chief concern I have with any nacho or loaded fry order is the traditional “sog dog” possibility. We’ve all been there, where the tortilla chip or fry base gets so overloaded with toppings and sauce that they become a soupy, wilted mass of nonsense. It’s always a delicate balance for restaurants to try and showcase the add on ingredients, without destroying the vehicle most patrons use to get the whole package into their face.

When opening up the tray of the Nacho Fries BellGrande I was somewhat calmed by the fact that the fries themselves didn’t appear to be flooded with nacho cheese sauce. A couple of fries even appeared to be some what naked, offering an opportunity to use them for dipping without getting your hands speckled.

I was immediately met with the disappointment that the fries weren’t super crisp and immediately bowed down in the face of adversity. This quickly became a fork driven effort. I will say that the combination of ingredients work well as a loaded fry option. It’s not often you get a taco inspired loaded fry, which makes this a relatively unique offering from Taco Bell.

The flavors definitely go well together and create a very reasonable flavor package. I will say that the Nacho Fries standout seasoning completely gets lost in the shuffle or they forgot to put it on. This is definitely a negative, as the seasoning steals the show for me. Regardless, there are plenty of other things happening here to give most people a good experience.

The Nacho Fries BellGrande combines the effort of a standard nacho platter and adds in the gluttonous French fry experience. While you’d be hard pressed to actually eat these without a fork and they’d better be eaten fresh out of the kitchen and not via takeout, the cheesy, beefy goodness of loaded fries works quite well, even if the seasoning on the fries is in witness protection.