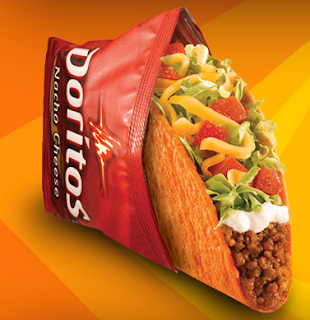 It’s 2012.  Year of the Dragon for some, end of the world for others, but for fast food this is the year of the taco.  And more specifically, this just might be the year Taco Bell revolutionizes the fast food taco forever.  In a couple of weeks, the Doritos Locos Tacos is going to hit stores with the impact of a wrecking ball going through a glass house. In a world where the limits on fast food have been pushed so far and ideas stretched so thin, who would have ever thought the simple idea of making a taco shell out of flavored tortilla chips, would be the game changer.  Read more to find out.

Full Disclosure:  Before anyone accuses me of being paid off by Taco Bell to write a great review, I’ll have you know that the only compensation I received for getting a sneak peak at the Doritos Locos Tacos was a couple of t shirts, a hat, a notebook, and a key chain.  I’m not exactly going to be putting a down payment on a town house with that, so I hope that you readers don’t think there’s any bias with this review.

Taco Bell’s hard shell tacos are the restaurant’s staple.  Cheap, simple, and almost always one of the throw ins on one of their value menus, the hard shell taco is the foundation for the adobe structure known as the Taco Bell kingdom.  I myself have always preferred the hard shell compared to the soft.  Even though it seems like most people sub in soft during their orders, I’m a hard shell man through and through.
That’s what makes this product so intriguing to me; it hits right in my wheel house.  I’ve always loved Doritos, especially the Cool Ranch variety, but whenever I heard that Taco Bell was going to be starting to make a new item with Doritos infused shells, my fast food senses were tingling like someone was fondling my feet with a feather.  Needless to say, I’ve been pumped more than a wacky waving inflatable arm flailing tube man for these puppies to become available.
The Doritos Locos Tacos will hit the shelves March 8th at midnight like I discussed in my previous report and I’ve detailed a whole slew of facts in our Special Report documenting my trip to the fast food mother land. 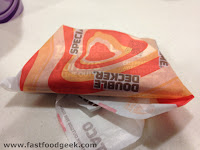 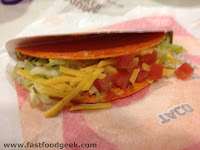 As I received my first Doritos Locos Taco in the traditional Taco Bell wrapping paper, it was actually hard to believe something so ordinary looking on the outside could be so monumental after you peel away its glossy exterior. 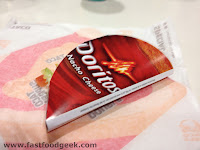 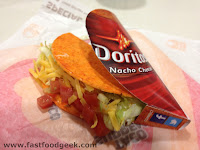 Once you removed the standard wrapping however, you’ll quickly notice this isn’t your normal, run of the mill, taco delivery.  Delivered in its own special flavor savor holster, this taco comes protected from all environmental hazards, so it hits your mouth with the impactful punch that was planned.  Some people will favor eating the taco directly out of its cardboard protector, but I wanted to get my hands dirty, so I grabbed ahold of the beast with an unearthly desire pulsing through my veins. 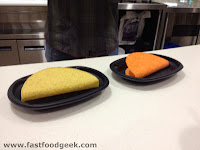 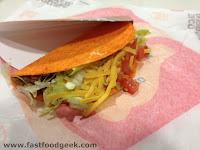 The shell is clearly different in color from the original, and it also feels seasoned.  The traditional Doritos dust is very prevalent, creating many finger licking interludes.  This could be a good thing or a bad thing depending on your views, but for me, there’s nothing like eating Cheetos and Doritos, finishing your allotment, then still having flavor for days accrued on your fingers. 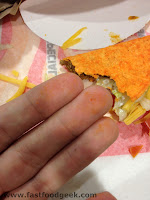 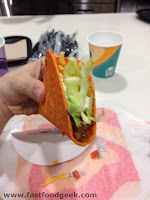 Biting down I was entrenched in a world of wonderment and fantasy.  Gone were the days whenever people would have to eat tortilla chips and tacos separately.  Now we live in a world where the two traditions were merged as one caloric gem. 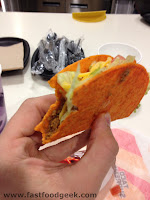 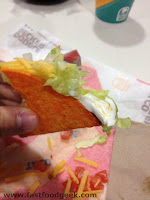 Overall, the taste of the Doritos Locos Tacos is something to behold, with a wide array of flavors attacking your buds with an unabashed attitude.  The Supreme variety, which I tried, had the additional reduced fat sour cream and tomatoes involved, creating a creamy, rich, and fresh taste.  The beef was seasoned to the max with the shredded cheese providing its usual consistent charm. 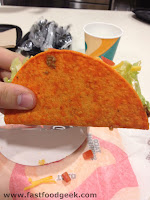 The actual Doritos shell is truly where the taco shines with a passion of 8400 burning suns.  While the actual shell doesn’t taste 100% like a Doritos chip directly from the bag, it tastes a tad bit more mild. But in a good way, because I honestly feel like if it was full blast, the taste of the taco overall would just be too much at once.  The makeup is nice and firm, a little bit stronger than a traditional Doritos chip, which is good because I know my mondo mouth sized double wide bites would have crushed the shell into bits and pieces if it wasn’t reinforced. 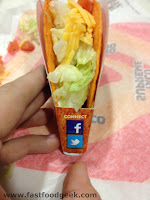 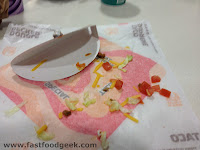 Putting it all together, all of the ingredients are bringing their A game, complimenting one another like a well rounded team.  The Doritos Locos Tacos gets a grandiose 4 star rating.  I have a feeling more than a few of these will find their way into my Taco bell orders for quite a while.