There’s been some prettty big noise pumping out of Taco Bell kitchen’s this year. The radical transformation continues with the addtion of the straight to full time menu Cantina Bell menu line. While I wouldn’t call two items a full line, the Cantina Burrito and Cantina Bowl have the opportunity to bring in a whole new customer base to the Bell. With celebrity chef Lorena Garcia providing the inspirational ingredients, it’s hard to beleive something so fresh came out of any fast food kitchen. 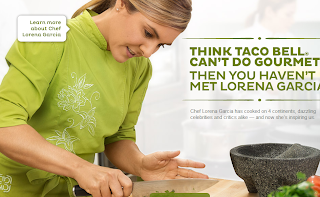 The Cantina Bell menu focuses on bringing in the new “gourmet” Mexican food scene to Taco Bell.  The likes of Qdoba and Chipotle have been running wild with fresh ingredients, exorbitant prices, and excessive trips to the bathroom for years, but Taco Bell is ready to cut in on their sales.  The food is perceived by many as “healthy” because of the natural ingredients although there are enough calories involved to send an average man into a coma.  Taco Bell is taking its own hand at this game with a Cantina Burrito and Cantina Bowl.

We’ll start off with the Cantina Bowl.  Rolling in with a respectable 560 Calories and 22 grams of fat, the Cantina Bowl could offers a very exotic and enticing meal option while not destroying your life.  While the other chains seem to be calling this a “naked burrito” or “burrito bowl” Taco Bell simply describes it as a bowl.  As you’ll see with the Cantina items, there are a lot of ingredients, so I don’t blame anyone for forgetting a handful of them.  We start off with a bed of cilantro rice, add in guacamole, roasted corn & pepper salsa, black beans, pico de gallo, a creamy cilantro dressing and top it off with Taco Bell’s brand new citrus marinated chicken, steak, or vegetable options.

As you can see from the pictures, the display comes off quite well, despite being constructed by some clearly confused employees.  It took a considerable amount of time to get our order filled with the new items and ingredients being implemented.  Overall the ingredients taste come together quite well.  An overwhelming sense of “fresh” falls over you like a waterfall on a hot day.  The corn indeed looks “roasted” as well as some freshly made pico intermingles for a very natural tasting veggie experience.  The new chicken was surprisingly tasty, with a true blue blood marinated feel.  There’s some random samplings of lettuce involved here and there actually could be more to add a more salad like feel.

The guacamole is still kind of weak and the rice is somewhat bland, but with these items being less than $5, you can’t complain too much. My fiancee discovered the clutch play of dipping chips into the bowl to create a Cantina Nacho ideal.  Very good idea.  The Cantina Bowl gets 3.5 stars.

Next up is what I was particularly interested in: The Cantina Burrito.  A burrito has always been my go to at the other guys.  But with the price around $7 and the calories in the four digit range, it’s hard to justify this purchase very often.  The Cantina Burrito pounds out 27 grams of fat and 760 calories, so we can’t say this is very healthy at all, but compared to other big burritos, it’s beats the competition to a pulp.

The Cantina Burrito takes everything involved in the bowl, wraps it in a flour tortilla, then puts it on Taco Bell’s grill press.  The jury is still out on how I fell about the grill press usage.  All of the other eateries typically flash grill the tortilla before any ingredients are added to soften up the tortilla.  While this typically leads to the tortilla crumbling and leaving the eater with swamp hands, Taco Bell’s alternative takes away from the gourmet factor.  It looks like a typical Grill’d Stuft burrito, which many aren’t looking for in this realm.

Overall the taste of the Cantina Burrito was good, but not great.  The ingredients were all there and the new inclusion of black beans into the Bell repertoire is very welcome, but in my humble opinion the thick tortilla masks the flavors.  Because pico doesn’t have a particularly strong, bold taste, it’s hard to really get maximum flavor whenever the salsa typically provides the kick. The bowl highlighted the fresh flavors quite a bit more. Next time I’ll definitely add some of the famous Taco Bell hot sauce to give the burrito that little kick it needs. Don’t get me wrong, it’s still a great tasting piece and for under $5 a steal.  Cantina Burrito gets a 3 star rating from me.

Head on over to Taco Bell and try out their new Cantina Bell menu.  And don’t forget the astoundingly priced $1.50 guac and chips!