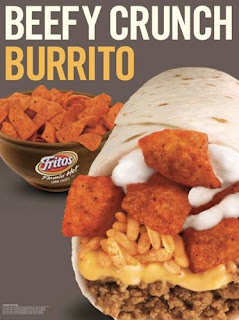 One of the worst parts about being lazy and this website being dormant for the better part of two years, was all of the glorious gimmicks that we missed out on.  It wasn’t like restaurants stopped releasing monthly risks and full blown flops.  One of these regrets comes in the form of Taco Bell’s virgin expedition into Frito Lay’s land of chipdom. 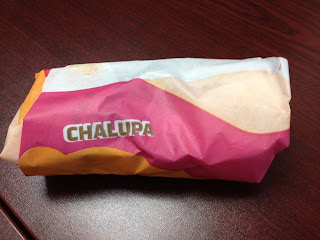 While we already reported about the upcoming Doritos Locos Taco coming in the new year, a year ago, Taco Bell unleashed the Beefy Crunch Burrito to high praise and record trips to the bathroom.  This .99 cent value priced burrito, is mostly standard fair, including beef, rice, nacho cheese,  and reduced fat sour cream. But at this point the trolley goes off the tracks, rams over two pedestrians, T-Bone’s a moose, and crashes into a store front with the addition of Fritos to the siesta.  Not just regular, everyday, eat a whole bag after your wife leaves you for another woman Frito’s either, we’re talking Flamin’ Hot Fritos.  Leave it to the Bell to push the limits of fast food by incorporating snack chips into the burrito equation.

But after making it all the way until this May even Taco Bell decided that the madness had gone too far, and shelved the burrito, adding to its gimmick lore.  But thanks to continuous public outcry and stoned teens across the nation, Taco Bell decided to bring back food bag for a second round on the promotional train.  We weren’t gonna miss it this time. 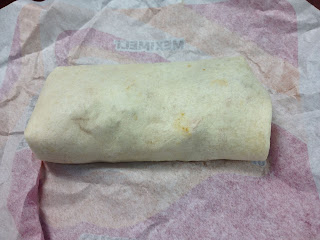 The first thing I noticed as I unsheathed the beast was that the bulbous beefy treat was seemingly quite large for something that costs .99 cents.  As a consumer, I have been quite conditioned to believe anything priced at a buck or less, can only be considered complimentary and not a full blown meal option. But with the Beefy Crunch Burrito we might have an enigma in the making for cheap satisfaction. 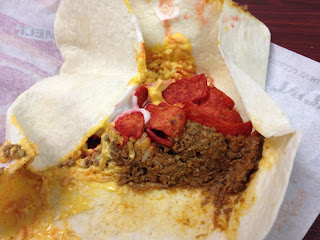 Upon unraveling, my suspicions were confirmed.  Stuffed with beef (beefy), Flamin’ Hot Fritos (crunchy), rice, and the two sauces, the food sack did seem to live up to its name. 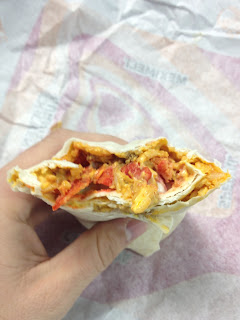 My first couple bites were consistent with typical Taco Bell treats, inconsistent and careless toppings distribution courtesy of depressed and untrained employees.  I guess I expect too much, but whenever you back five ingredients into a tortilla, I would hope that you would at least get some semblance of a balance within.  No such luck, with my first two bites consisting of just beef and nacho cheese. 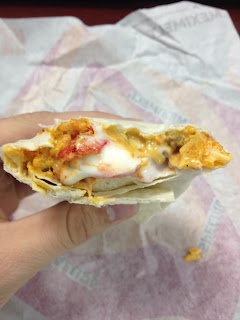 But whenever I hit the middle though, I reached an odyssey of awesome.  For one brief moment, the clouds parted and the sun beamed down on my over sized forehead.  A big time crunch courtesy of the Fritos, beef, cheese, sour cream, and rice all together in harmonious harmony.

The Flamin’ Hot Frito’s really do add a nice zip, adding spunk and crunch in a single fluid motion.  Add this to an already solid, value heavy burrito and I left the table heavily satisfied, emphasis on heavy.  The Beefy Crunch Burrito gets a really solid 3.5 stars. 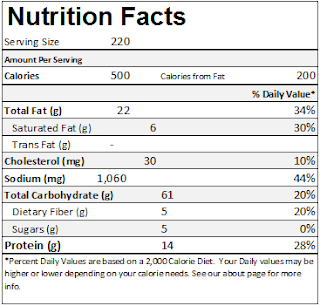