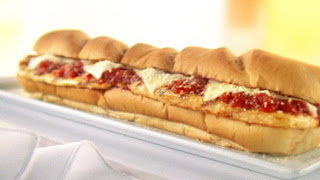 Ever since Jared’s “Walk thirty miles a day, starve yourself , spend $10+ a day on the healthiest possible 18 inches of Subway subs, and lose a million pounds” diet, the world has somehow become transfixed with the idea that Subway is healthy.  While they obviously have plenty of “healthier” options than the typical grease and release fast food joint, by no means would I call the typical subway footlong,  with all having well over 500 calories, a healthy lunch.

Despite their low fat numbers, the calories are just as bad as any Big Mac, and with Men’s Health’s iconic Eat This Not That stating that watching cals is exponentially  more important than watching fat, it’s quite clear that Subway and Jared have America fooled. So as a preface, I don’t hate Subway, in fact I eat there quite often, but I’m fully aware that if I slap down Abraham Lincoln’s face on the counter at America’s #1 Fast Food establishment, there’s a good chance my beltline will still be bursting later.
Keeping all of this in mind, I meandered with my girlfriend into Subway for a classic Thursday Lunch Hour sesh to celebrate National Sandwich Day in style. The worst part about Subway, is the wretched stench you and your clothes have after leaving the facilities. Spending twenty minutes in any Subway can leave your clothes saturated with smog for a fortnight.   So almost any trip to Subway leaves me saying “to go” at the end of the transaction.
Today’s sandwich of choice was the Featured Footlong of the Month: the Chicken Marinara Melt. Weighing in at 820 calories, I was expecting a delectable Italian feast. Wrought with rich cheeses, hearty and spice laden tomato sauce, and bursting breasts of chicken.  Ordering the exact same sandwich as advertised, with Italian bread, American style cheese, grilled chicken breast, marinara sauce, all topped off with a generous shake of parmesan cheese, and toasted to “microwaved perfection” I stared at my sandwich being made, giddy like a school girl.
I’d have to admit, before my footdog was wrapped up in the Subway branded shrink wrap, that sogs up the sandwich faster than socks in a tsunami, I was very impressed with how the sandwich looked. It looked melty, borderline toasty, and when I squinted harder than your grandpa reading the paper I’m pretty sure I may have saw the faint “bubbling” of cheese that you see in the commercials, but never in reality. 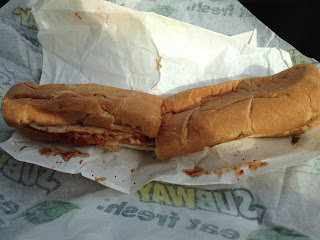 Gotta admit, I got my hopes up. A fatal mistake. For, I learned long ago, when I was just a tike, that fast food faith is the most fickle of all.  First of all, by the time I got to the car, the sandwich had lost all of its bubbly grandeur and was left swampier than Chaz Bono’s armpits after a five mile hike. 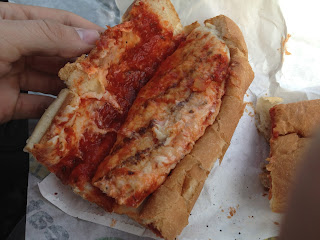 After unwrapping the swollen log, I peeled back the soupy bread, to reveal what looked like a murder scene. Watery marina, fake grill marks, and the “slam on your brakes” smeary cheese, made this featured footlong look like it had been through a minor gang war. 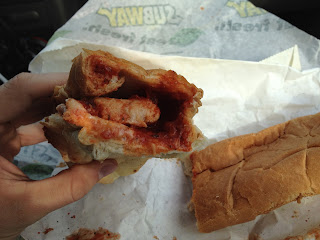 Trouble continued to brew whenever I took my first bite, and literally felt like I bit into drywall.  There was no taste whatsoever.  The marinara was watered down and tasted like bland, drab, canned tomato sauce.  The chicken was, shall I say chewy? An attribute that was more scary that satisfying.  Even the cheese couldn’t save this sandwich from a failing grade. Once a bubbly fantasy, hard turned into a tasteless tease. Humbled, broken, and depressed, I finished this 820 calorie Titantic of terror. 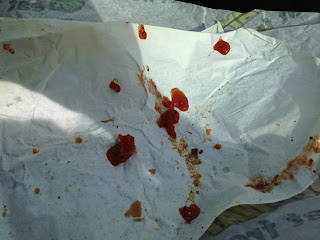 This sandwich ended up with the same fate as the Chicken Pizziola of yester year, soggy, a bit too chewy, and devoid of flavor. Hey, at least that one had pepperoni in it. My pride broken, all that was left was a few puddles of sauce, and the inevitable stomach ache that followed.
Subway’s: Chicken Marinara Melt: 1/5
~Andrew
@atkpitt12 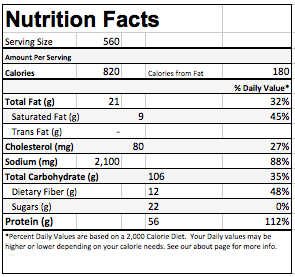