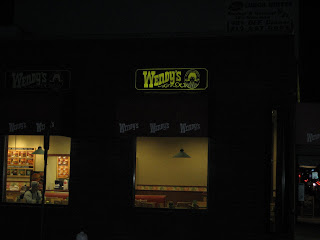 Back when Dave Thomas ruled over Wendy’s, the world seemed to make more sense. Well at least the fast food world that is. My childhood memories of Wendy’s were fond, for they had a salad bar, really tasty hamburgers, and the best thing of all a monthly promotional sandwich. There’s nothing that gets me into a restaurant quicker than a brand new item. I always want to try it, no matter what it is or how bad it looks. Wendy’s could have deep fried a sock, put it on a cardboard box, then drizzled it in antiseptic and put it in an uninspired commercial, and I still would have found myself eating it later that week.

But times have changed, and as the years have gone by, Dave Thomas has passed and so has his restaurants direction. Gone is the salad bar (and the most underrated breadstick this side of the Mason Dixon Line), gone is Big Bacon Classic (still available but not even mentioned on the menu), hello Frescata Sandwiches, hello Baconators, and say farewell to promotional sandwiches.

The promotional sandwich success story is that of the Spicy Chicken Sandwich. A one time promotional item that was so successful, small riots broke out at my local Wendy’s when it was taken away. (Not really, but my father got pretty upset though). Anyway, Wendy’s eventually not only brought back the sandwich, but they made it into a full time menu item. So you know that Wendy’s Headquarters paid close attention to their gimmick sandwiches. 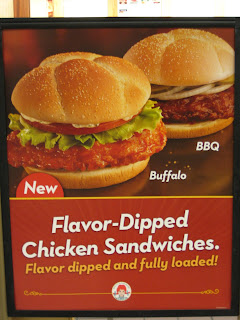 This leads to the return of Wendy’s promotional sandwich; the Flavor-Dipped Chicken Sandwich. Available in Buffalo or BBQ, the sandwiches take Wendy’s original chicken breast fillet and dip them completely in the sauce. The Buffalo one adds in lettuce, tomato and what is advertised as a Blue Cheese sauce, while the BBQ throws in onions and pickles. The sandwiches are getting heavy ad time on TV and radio, including such claims as 360 degrees of flavor and taste explosions in every bite. All of these factors required a g&gg review. 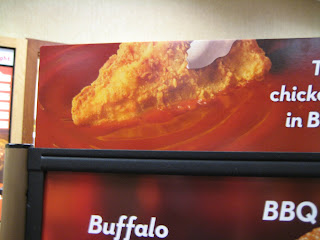 So my colleague, Mike, and I went to the local Wendy’s and we each ordered a Flavor Dipped Combo, somewhat steeply priced at $5.99. We then went on and cut each sandwich in half so we could each experience what each flavor banger had to offer. 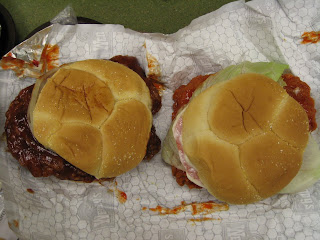 As you can see, the sandwiches are indeed saucy. This is definitely not one of those “eat in your car while driving through rush hour with your best white dress shirt on” sandwiches. Aside from that, the one thing that really seemed to be apparent was the girth of the chicken breasts. Most fast food places these days give you the proverbial prefab chicken breast that’s not quite flat but is no more than a b cup. The Flavor Dipped sandwiches have the look of a sandwich that could be dynamic and exciting with each order. 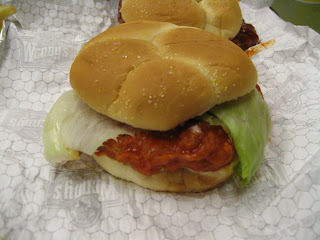 The Buffalo Sandwich truly is a great eat. This particular sandwich had been completely engulfed in sauce, and this buffalo sauce is just what the doctor prescribed. All too often eateries either throw out a buffalo sauce that’s been saturated in weak sauce or a sauce that’s just been harvested in the ravines of hell (yeah, Quizno’s I’m talking to you), but this sauce is just right. The lettuce in the sandwich looks like it should be wearing flood pants because it’s just a sog fest. This doesn’t really affect anything in the overall experience though. The tomato seemed to be cemented to the top bun by the secondary sauce. This sauce is quite mysterious though. While I am in fact color blind, it’s hard to not notice the tan tinge with dark spots topping the sandwich in the poster. But what I got appeared to be straight up chunky mayo. Was this a very vanilla bleu cheese? Was this a Wendy’s employee being lazy and not wanting to open up the special sauce? Whatever the case, this is what the professionals call weak dogg. Luckily the Flavor Dipped Buffalo sauce makes up for this miscue. Overall the sandwich gets a 4/5 in my eyes. This is a sandwich that you should go out and buy before it is too late. Wendy’s take on buffalo chicken is a must eat, despite the lackluster toppings. 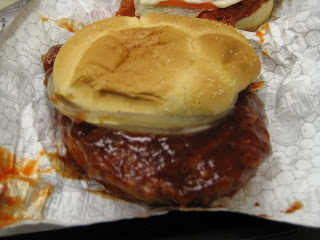 On to the BBQ sandwich, with all of the ad posters displaying the Buffalo sandwich prominently up front, the BBQ may appear to be getting the 2nd billing. Don’t believe this because this sandwich brings the flavor train into the station as well. As noted before this breast was particularly large. I was kind of worried because the prices for these sandwiches are premium and I wanted to feel like I was getting my moneys worth. With this much chicken, it’s definitely a solid value. While not a large BBQ fan by trade, I have to admit that this a great sauce indeed. A tangy yet vibrant taste encased the whole chicken and the onions and pickles only went the extra mile to compliment this sauce. I believe that the BBQ was a lot less messy than the buffalo because you’re not dealing with the waterslide lettuce or extra sauce mayo. The BBQ gets a 4/5 from me as well. If you are a fan of BBQ chicken this is another must get for you. 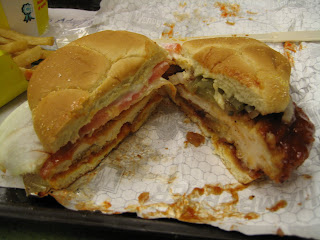 While there are no indications on whether or not Wendy’s will keep these sandwiches around, I do believe that everyone should go out and give one if not both of these a sampling. I do declare that it’ll be worth your while.

Coming up, I’ll be taking on my first classic review, McDonald’s Big Mac.