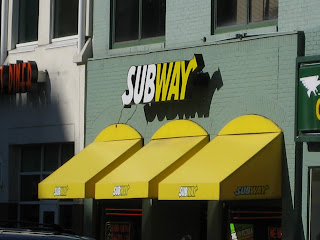 For a long time now, Subway has changed what some call the Fast-Food Industry. This new low fat, healthy movement just doesn’t fit in with greasy burgers, bacon covered meat slabs, and double battered extra crispy chicken. But Subway is very successful at what they do, and they have done so with a combination of “I’m no longer fat” ads and finding new ways to put lunchmeat on bread. While Subway does offer a lot of low fat options, they have also recently taken on the college students interests in another way: lower prices. The $5 footlong and the accompanying ad campaign (with catchy song) has gone a long way in earning purchases from my pockets. On countless occasions, I’ve found myself wondering what’s for lunch, and that simple $5 price tag latches on to me like a hobo on a ham sandwich.

So i found myself walking by the local sandwich artist factory and I was blown away by this poster: 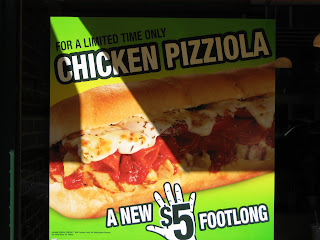 Now if you are a huge fan of promotional sandwiches like I am, you will remember that this sandwich was out before a couple of years ago. I never got around to getting it then and I never thought I’d be able to confront this saucy meat specimen. Subway routinely has monthly specials, which pleases me greatly, and they are usually not healthy, but this one did fit into the $5 Footlong club. So of course I was in.

The Chicken Pizziola is quite a strange combination. With, two thirds pizza, one third grilled chicken, the average man’s palate would not be able to assess the flavors before swallowing. The sandwich routinely combines italian bread, grilled chicken slabs, pepperoni, marinara sauce, and pepper jack cheese. To create an equal opportunity environment I did not alter any of the variables so that you readers could get a feel for how this sandwich was made to be. 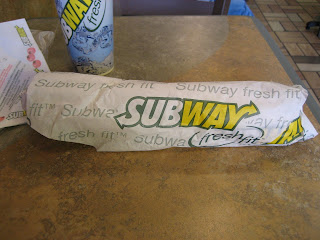 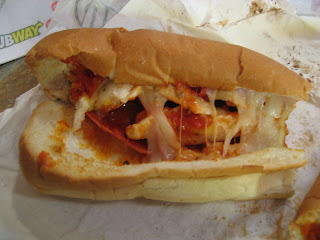 Well there she blows. Its amazing how fast food never comes out the way the poster appears. All the elements of the advertised sandwich that lured me in were there, but for whatever reason it no longer looked all that good. But anyway, I stated mounging, and was relatively happy with my first round of chews. The meat was there, the sauce was there, and there was even some ooey gooey melted cheese. I was a happy man until, the dreaded fifth bite occurred. 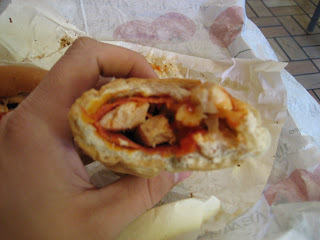 Lets just say that I experienced what professionals in the business refer to as chewy chicken. That not too firm, ever too soft and mushy feeling that makes your stomach crumble. It appears as though, the toasting mechanism at subway has either lost some of its juice or it actually doesn’t do anything at all (which I’ve always suspected). Anyway this mush factor dampened my experience to a considerable degree.

But because of the fact that all Subway chicken isn’t chewy I’m gonna give you readers an arbitrary take. The sandwich is pretty alright. The combo of meat was surprisingly well done and the melty pepper jack was fairly legit. The marinara, however, was runny, bland and overall makeshift at best. I can understand that Subway does not specialize in marinara sauce, but their effort currently is subpar. And according to this mural in the restaurant: 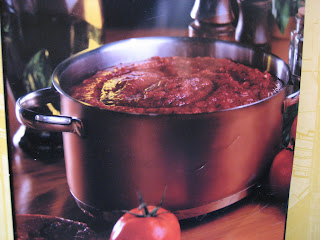 This sauce is being made somewhere on a stovetop in the back. Well if you believe that, you’ll be shocked to see the big plastic bag of sauce being carted in and then crowaved to add a final touch. But I have to say that Subway isn’t using its comparative advantage here with this sandwich. Subway specializes in simplicity, we’re talking breads and lunch meats. So to go out on a limb and try to create a chicken pizza sandwich, Subway just falls short.

So I’m gonna give the Chicken Pizziola a 2/5 stars. Not Subways best effort, but at least they’re giving me something new each month.

Look back later this week for Wendy’s Flavor Dipped Chicken Sandwiches review, where we ask the question: is 360 degrees of flavor a math problem or a satisfying flavor nugget.