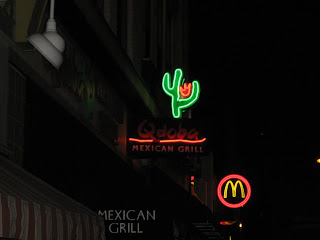 I wanted to start off by saying that G&GG has surpassed my wildest expectations. We officially have 36 unique hits on the web site, far superior to my goal of 10. So for all of you that have made this possible, it is well appreciated.

I created this site for fun, I love gimmicks, goodies, food, and so do my friends. I like writing and I love to make people laugh. I just hope some of this is funny. Also, if you guys like what you see, let us know by leaving comments at the end of the posts. Alright, on to the review.

In my eyes, Qdoba is a Mexican Subway. They make your food right in front of you, and its Mexican in nature. For as long as I can remember I went there for their Chicken Queso Burritos. This is basically a pouch of carbs and fats that will leave you full and stagnant for days. But recently, I’ve heard plenty of uproar about their Mexican Gumbo.

Gumbo, you say, what’s that? Usually when I hear the word gumbo, I shudder. I don’t actually know what it usually consists of or where it originates but it has always sounded like a con-fuddled mess to me. So I had some doubts when I heard them raving of its delights. But one day, I decided that it was time to take a step on the wild side and try something off the wall. 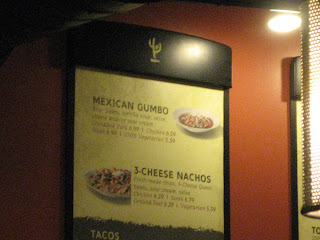 The funny thing about the Mexican Gumbo is that I had never even noticed it on the menu. I had either been too lazy to see it, or had just unconsciously written it off. Anyway, I’ve come to find that the Mexican Gumbo is what I call an inventory gouger. It is simply a whole mess of random ingredients, all of which Qdoba has plenty of (perhaps too much lying around in the back) thrown into a bowl. Here’s the rundown, we have a bowl with rice, your choice of black or pinto beans, tortilla soup, tortilla strips, your choice of meat (or the no meat vegetarian style), salsa, sour cream, and cheese. Sounds like something the Wicked Witch of the Northwest would be toiling around in her cauldron eh? But anyway, I got all of the above, with black beans and chicken as my choices. 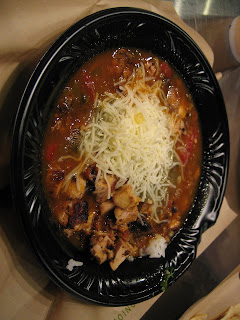 So when it comes down to it, the Mexican gumbo is kind of like a chunky soup. Its thick, its hearty, and it reminds me of something an NFL player’s mother might serve. So I mixed it up a little, just so that the salsa and cheese could be submerged with the rest of the ingredients and then I took my first dramatic spoonful. 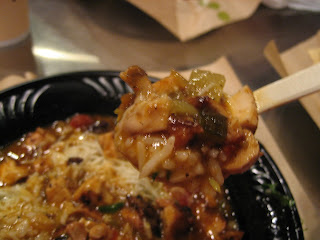 Lets just say, I was pleasantly surprised in an all new way. The conglomerate of flavors mixes to an astounding matter. I literally took another spoonful immediately to see whether or not I had just day dreamed the first bite. But no, it just got better. It gave me a warm confronting feeling, was spicy yet not too tangy, and gave me an overall sense of delight.

I have found that the best way to eat the gumbo is to accompany it with tortilla chips and use it as a pseudo dip. Never in the history of GG&G, have I gotten a standard menu item and have enjoyed it so much that I had to review it. 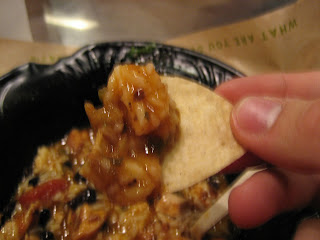 A few notes to relay: First off, your body does not come ready for Mexican Gumbo. The first time you eat this, it will go right through you. As one would say, “The first time you eat it, you’re stomach is like ‘What the hell is this’. Your body has to build up a tolerance”. The second time around though, you’ll be good to go. And also, you should eat this stuff as quickly as possible, because it has a tendency to get cold relatively fast. It is best experienced piping hot, so eat up.

I have to give Qdoba’s Mexican Gumbo a 4.5/5 (the highest rating so far), on the basis that it is here to stay, tastes amazing, and I was really caught off guard by it. I can’t give it a five though because, like all foods, it is not perfect and does get cold quickly and digestibility can be called into question.

So go out and try yourself some Mexican Gumbo, I promise you that it will be a good decision.