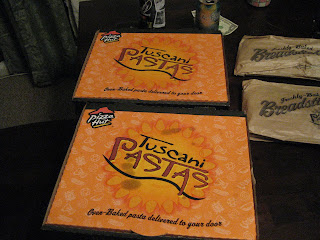 Pizza Hut has and always will be a form of fast food. There’s no way around it. They have been making pre-fabricated pizza like no body’s business for a number of years without much of a fuss. The pan crust is uniform and predictable, because when you order a pepperoni pan pizza from the ‘Hut you know what you’ll be getting. This isn’t a bad thing, but when you go to most quality restaurants you won’t find this to be the case. But now, Pizza Hut is stretching out their wings and making some pretty bold and brash statements:

Such commercials as this one, are trying to tell the American people that Italian Restaurant quality pasta is now being made at Pizza Hut. Not only are people fooled by the pasta in the commercial, but they also rave about the pasta as if it is something truly unique and outstanding. The words “I like it even better now”, are actually uttered whenever it is revealed to be Pizza Hut.

So it’s a Friday night, and the g and double g crew decided to put these statements to the test. The plan was to order some Pasta Hut and see for ourselves and the readers what’s really going on here.

We decided to take on the Meaty Marinara and the Creamy Chicken Alfredo varieties. While the Mac and Cheese with Bacon sounded quite tempting, we figured the classic marinara and alfredo sauces would give us a true representation on how Pizza Hut handles the basics. Each order of Tuscani Pasta is supposed to feed four and comes with five breadsticks. As anyone can tell, these numbers just don’t add up. There was much debate and discussion about why Pizza Hut would give you that extra bread stick. Answers ranged from theories that Pizza Hut simply wanted to throw in an extra breadstick to be cut four ways, to more outlandish statements that they were intentionally trying to instigate family bickering. The divorce rate is over 50% already, there’s no need to cause more problems at the dinner table.

In all of my days as a consumer, I have never seen such a confuddled and makeshift ordering process as the one at Pizza Hut’s website. When I order food online, I’m looking for a quick and easy experience. I can see putting in my email address, delivery address, and even putting in my credit card info for future purchases. But never did I imagine that my age and my mother’s maiden name would need to be included for ordering pasta. Worst of all, if things were filled out improperly the website reset random items when you went back to the original screen. So the next time you go to order something from Pizza Hut’s website, remember to bring three forms of identification and a copy of the Constitution.

After I successfully made my order, Pizza Hut gave me an estimated arrival time of 8:17. I wonder if Pizza Hut is given this exact time because I couldn’t help but think to myself that I would be greatly disappointed if my order arrived anytime after this.

Just as expected, 8:35 rolls around and the pasta finally arrives. A grisly looking delivery man provides service with a smile despite the fact that he clearly hated his life. A ceremonial picture was planned for the handoff but was quickly passed over when it seemed clear that our lives might be at risk.

If anything, the pasta along with the breadsticks came in some nice packaging. I was impressed with the look of the boxes and was even more surprised to see that Pizza Hut didn’t just throw in a normal box of breadsticks. They instead came in their own special pouch. 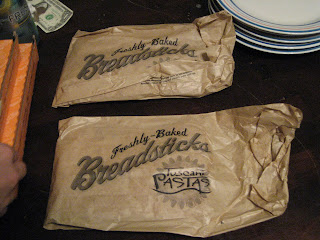 This is when the disappointments started to roll in. I pulled out my breadstick and stared at it like I had just seen a ghost. The customary Pizza Hut breadstick drizzled in garlic, herbs, and spices was gone. What lay before me, was just a bitter hollow shell of reality. 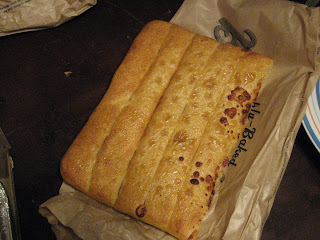 There was no garlic; there were neither spices, nor herbs about. All that was there was that fluffy bread, naked and bare. I quickly consulted the other 9 bread sticks, and came to the bitter realization that this was not a joke but in fact quite real. Not able to handle the truth, I bit in thinking that maybe Pizza Hut baked in the flavor. 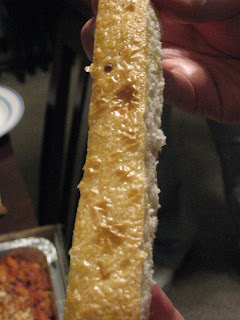 I was met with blandness equaling non-fat cottage cheese. Pizza Hut had clearly failed. I can’t allow this to bias my feelings on the actual Pasta but I’m not going to lie when I say that the breadsticks left me wanting to crawl into the fetal position. 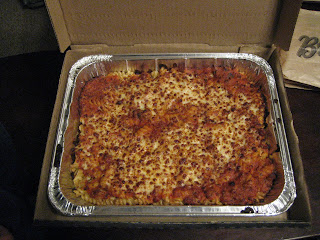 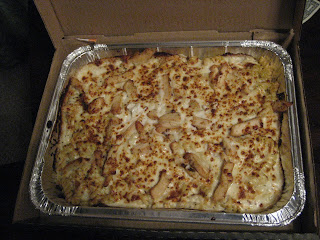 So there they are, the official unveiling of what appears to be…pizza? Is it just me or does it even look like the pasta had a crust on the edges? It seems quite clear to all parties that when making this pasta, the chef pulled the premade arrangement from the freezer, to the oven, to the box it comes in, a five minute process at worst.

The first piece of information that the Pizza Hut marketing group successfully fooled me with their commercials was that fact that there would be a lot of food. Giving you figures such as three pounds of pasta and using the phrase “family sized” gave me the impression that six people were gonna have trouble finishing two orders. After looking at what was there, it was clear to me that a second helping wasn’t going to be a viable option because I’m assuming that the three pounds included the box, the aluminum tray, the net weight of the bland sticks, and the birth weight of the cook’s first born as well.

The second piece of information Pizza Hut is fooling America with in their commercials is the “restaurant quality” of the pizza. The meaty marinara variety came with the ingredients advertised. We had rotini pasta and we had meat sauce. Throughout eating it I never really thought that it was an actual Italian meat sauce, but merely ground beef was added and then they threw in some pizza sauce. Italian, restaurant quality meat sauce is a delicate art and can’t be emulated through a shapeshifter attempt. I really felt like I was eating a meaty pizza the entire time. The pasta in this batch especially, was hard in some spots while soft and limp in others. This is also something that isn’t exactly screaming restaurant quality. 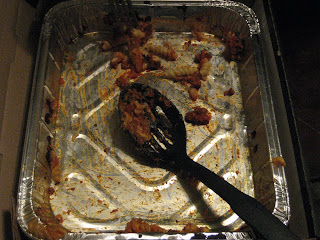 Moving on to the Creamy Alfredo with Chicken I was growing fearful. Pizza Hut had already let me down with the brick sticks, they had basically given me a meat lovers pizza on their first pasta attempt and now I would be trying a whole parcel of ingredients that the ‘Hut doesn’t even use on a normal basis. Much to my surprise the alfredo wasn’t too bad. By no way was it a slam dunk, grand slam, or anything of the sort but I wasn’t totally besmirched either. The alfredo was kind of pasty but the pasta seemed to be a little more consistent here and the chicken was decent. But the overwhelming sentiment from myself and five of my colleagues was none of us would have been fooled into thinking that anywhere, even Olive Garden could have served this and people wouldn’t have been upset. 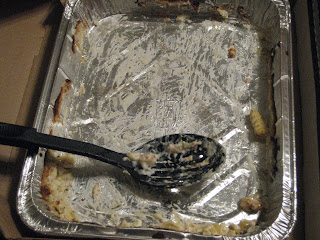 Its one thing to have pasta, promote it as a new item and tell the people to give it a try. But it’s a completely different ball game to tell your customers that their fellow Americans went to a “real restaurant”, ordered from a menu consisting of three choices, and then were given pizza pasta, and no one would be the least bit concerned. If Pizza Hut would have had any other ad campaign for this pasta I wouldn’t be as harsh. But the worst thing you can do is try to bs your way into fast food glory. Real people, who aren’t receiving paychecks from Pizza Hut, will see what’s really going on here.

In all honesty, the pasta isn’t terrible, but it’s not something you’d find at a real Italian restaurant.