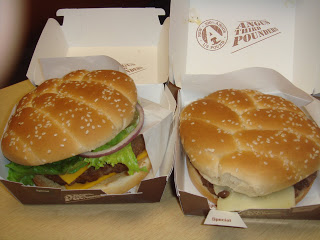 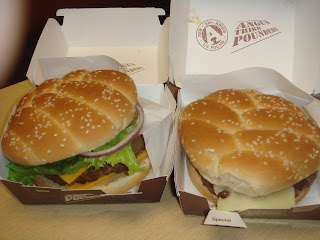 When life gives you lemons, eat a 1/3 pound of meat. That’s what I always say, or have been saying since this Monday. Life just hasn’t been the same for me recently, so my colleagues and I decided to go for a big time review: The Angus 1/3 Pounders from McDonald’s. Theses sandwiches are currently being test marketed. Meaning, they are only available in select areas of the country and will launch them nationwide if sales are good enough.

I want to start off with a little background about the Angus. Sometime last year I was home alone on a Saturday night watching some sort of 20/20 program. Included in the program was a story about how McDonald’s comes up with new products. Believe it or not the process starts off with a team of seven world class chefs. They come up with, cook, and create new sandwiches and other treats for McDonald’s to mass produce later on. Its hard to imagine the snack wrap ever being assembled in a stainless steel kitchen, with seven chefs bickering on which way the tortilla wrap should be folded.

The Angus burgers have been in development for a couple of years now. The sandwiches were originally designed to compete with the Burger King Steakhouses and are going after the meat lover market. The interesting thing about McDonald’s R&D (research and development) is the fact that the burgers are crafted by the chefs using top of the line meat and toppings. As you may have guessed, this simply can’t be done on a mass production basis. So what McDonald’s does is take one ingredient at a time and substitutes it with a cheaper more available version of the ingredient and then conducts taste tests to see if people notice. The 20/20 people visited the kitchen whenever they were trying to replace the sauce. The tests were a failure as over 85% of the taste testers could sense that sauce was changed from the premium to the commercial variety. (This could lead up to the reason that the Angus Burgers currently don’t have any kind of special sauce.)

So a year later, they’re here. Coupled with a commercial including a jingle that actually uses the lines “You’re my favorite Angus” and “You mean more to me than life itself” the Angus burgers come in three different sets of “tasty toppins” and people living in test markets can go out and try these burgers. Let’s go over what these burgers consist of: first we have the deluxe. 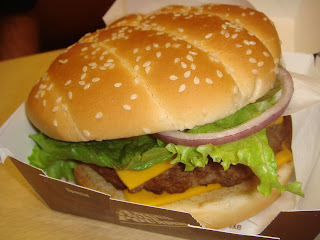 The name is misleading because the deluxe is actually just the original version of the Angus. The deluxe encompasses a third pound of beef, what appears to be American cheese, a real piece of lettuce (not the paper shredder lettuce ala Big Mac), a tomato, red onions, deluxe pickles, mayo, mustard, all on a bakery style sesame seed bun. When looking at this burger it is easy to see that it is quite large. 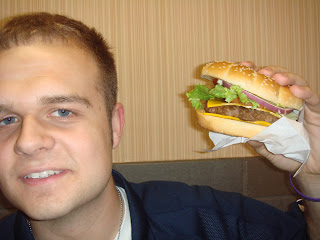 When comparing it to my head, it seems as though the burger could encompass my entire skull if it were so inclined. This burger is surprisingly well crafted and isn’t the slop fest that other things at McDonald’s have the reputation for being. The toppings are premium in nature compared to other McDonald’s burgers, we have a real piece of lettuce, the pickles are noticeably bigger, and the onions are red instead of the chopped up white ones. The burger lacks any special sauce, but the mayo and mustard served as nice compliments. My burger actually had ketchup on it too, which just shows you that these sandwiches are still in their infantile stages. The actual meat tasted really well too. I thought that I would be overwhelmed with the burgers incredible girth, but even though I went into the experience not being overly hungry I finished the Deluxe with relative ease.

This burger is definitely worth trying. We felt as though the Deluxe 1/3 Pounder was the equivalent of getting a burger at a sit down restaurant such as Applebee’s or Chili’s. The toppings were premium, the bun was legit, and the meat was really tasty. As far as fast food goes, this sandwich is close to the top of the line. I will give the Deluxe a 4/5.

Consisting of a patty surrounded by slices of Swiss cheese on the top and bottom, and then a whole sachmo of mushrooms topped with mayo, the Mushroom and Swiss had the potential to really capture the mushroom lovers market out there. However, this burger fell flat like a trip to the lumber section. As you can see the Swiss cheese at McDonald’s is a work in progress. 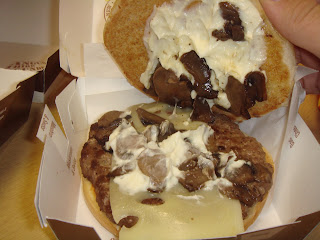 The color looked off, even to me, and was cut in an inconsistent way. And then there was the mayonnaise. Someone should have mentioned to the McDonald’s staff that gravity would keep mushrooms on the patty, no one needed to use mayo as an adhesive to keep them there. This is what happens when you give McDonald’s employees free reign on sauces.

So in this case we had to give the Mushroom and Swiss a 3/5, for the simple fact that it simply did not deliver. It can be noted, however, that the mushrooms exceeded expectations for taste and quality.

So with years and years of development the Angus Burgers get our seal of approval. The Deluxe version is in the top class of fast food and even though the other varieties aren’t anything special, the Deluxe should be able to make an appearance on the permanent menu one day.

But who knows, I’ve been wrong before and the Angus could be gone by tomorrow. So go out and try one, so those annoying people from Boston can get their patties.

Lastly, we noted on the box of the Angus there are four identification tabs, one for the three existing versions, and then another tab labeled “Special”. 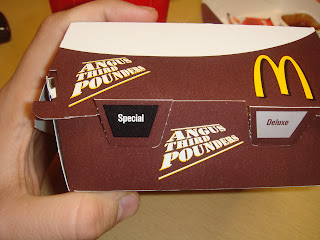 One can only wonder what Ronald has planned for this. But you can rest assured we will be here to review it when it rears its ugly head.