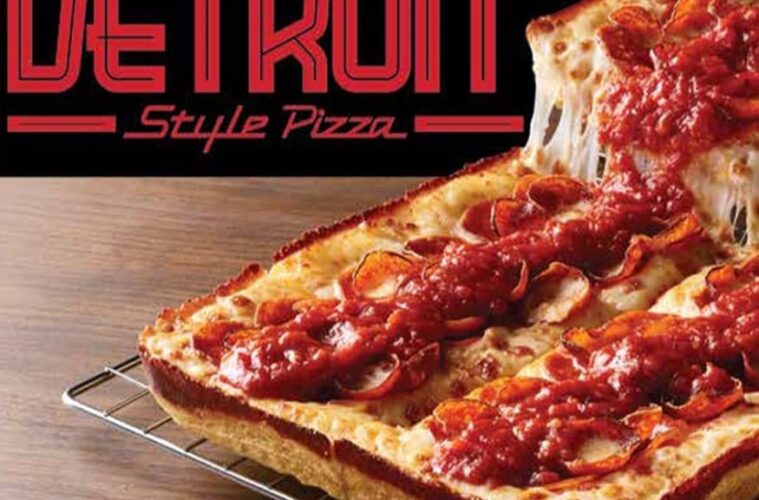 Pizza Hut describes their Detroit Style Pizza like this:

Introducing our NEW Detroit-Style Pizza, an indulgent deep-dish pizza that’s loaded with toppings and cheese all the way to the edge of a crispy, caramelized crust and topped with premium diced tomato sauce.

While I’d love to try an authentic slice of Detroit Style pizza, the chances of me heading to Michigan any time soon are quite minute, so trying the Pizza Hut variety will have to suffice. This style of pizza has received a considerable amount of buzz recently so let’s try to break down why it’s different from a typical pan pizza.

A rectangular deep dish, the dough is framed at the bottom and then surrounded by cheese all the way to the edges of the crust. During the cooking process the cheese and crust will caramelize into a satisfying crisp. Sauce is purposefully not added until later to dissuade any sog factor in the crust. Toppings are loaded on top and then the pizza is cooked in the oven. Once removed, hot temperature sauce is traditionally ladled on the pizza in two rows.

Now it is time to decipher whether Pizza Hut followed their own description and to also see if it stacks up to the traditional Detroit style. We ordered the Double Pepperoni variety, which is supposed to have traditional pepperoni slices and crispy cubed pepperoni as toppings. Pizza Hut also offers a Double Cheese, Meaty Deluxe, and Supremo variety that can be customized to some degree. In our region the 8 slice pie costs you $10.99 or $12.99 depending on variety.

From associates trying this pie prior, I know that there is supposed to be a special box that this pizza comes in, but it appears that my local Hut decided to cut costs and not order these boxes.

Upon opening the lid, it also appears that my local Hut didn’t get the memo that when you have the sauce on top, one of those neat white, plastic divider doohickeys should also be used, because this pie looked like a murder scene.

Right away it looked like this Pizza Hut also didn’t use the correct sauce, because the new Diced Tomato sauce is supposed to be thick and chunky, but this sauce was so thin that it created a splatter effect CSI would have trouble deducing.

While only some of the pieces were supremely drenched, the pieces that were able to be salvaged, were definitely crisp, and while the cheese layering on the crust didn’t appear to be quite even, there were some trace evidence of blackened, cheese crispness.

While there definitely didn’t seem to be cubed chunks of pepperoni, two distinct sized peps were noticeable, with ones that stayed flat and others that curled up creating pools of luscious grease.

Biting down the pie was definitely different with the lack of sauce under the cheese. It created almost like a cheese bread effect, where the sauce was merely a topping instead of an encompassed ingredient. While the sauce on top definitely wasn’t typical Hut style, upon further review I really think that it was the breadstick marinara because it was so sweet and runny.

This actually was quite tasty, being a fan of sweeter sauce, just noting that it definitely wasn’t the actual right recipe. The corner pieces of the pizza really stood out, with the crispy, cheesy crust being the standout feature of the pie. The pizza was quite tasty and while it probably won’t make it to the full time menu, we definitely liked it over the regular Pan Pizza from the Hut.

While I’m sure most Detroit loyalists would consider this a travesty to the authentic style, and my local Pizza Hut definitely screwed up the sauce, this pizza was quite enjoyable regardless. While it is still around, I’d definitely recommend you give this Motor City Muncher a try.