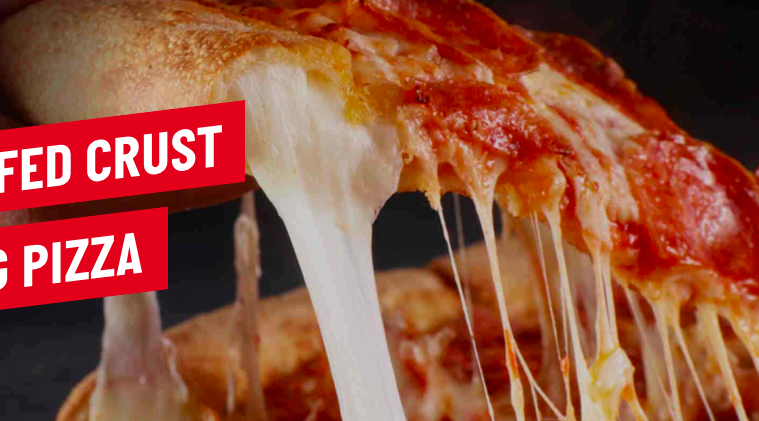 For the longest time, the Stuffed Crust game has been a one man show. Let’s take a look and see how Papa John’s new entry handles Pizza Hut’s GOAT.

Papa John’s describes the Epic Stuffed Crust like this:

Want more cheese? We know the answer. So we stuffed our fresh, never -frozen original dough with melty cheese and baked it to a crispy golden goodness.

Introduced a few decades ago, Pizza Hut’s “Original Stuffed Crust” has been crushing the game, unopposed. We’ve all experienced it, in its prefab, floppy glory. The crust is so sturdy and steadfast that the actual bottom layer of dough that holds the sauce, cheese, and toppings never seems to hold up.

Papa John’s claim is that their Epic Stuffed Crust is actually made on the fly with fresh dough. Having spoken with noted pizza experts in my family, making stuffed crust from scratch is a laborious and slow process, where you must make a regular pizza dough, layer cheese around the border, and then roll it up to encapsulate the cheese. This doesn’t seem like something you could mass produce on a given day, but that is what Papa is claiming.

Papa John’s is offering an 8 cut “Large” 1 topping Stuffed Crust for $12. Most Stuffed Crust deals almost always feature only one topping, which has always given me the impression that the pie can’t sustain much more.

Unveiling the pie, if you focus on the crust, you can actually tell that it’s bursting and looks pretty robust. The pizza itself has a relatively standard look of Father Jonathan’s pie. Greasy, loads of cheese, and exposed pepperoni.

The classic claim that whenever you pull a slice of Stuffed Crust away from the rest of the pie, is that its crust cheese will ooze back with almost outstretched arms, trying to remain with its kin. Needless to say is that this never happens, no matter how fresh, and it didn’t occur here either sadly.

The crust itself is loaded with wads of cheese. It was definitely melty to the point of bursting, but it was so uniform and staying together that this can’t be shredded cheese. In my infinite wisdom, I picture almost a concurrent tube of string cheese rolled up in the crust. Regardless the crust taste itself was ideal, being hot and gooey. There was a nice amount of zest and the stuffed crust portion of this pie is a winner.

The pizza itself showed up to play as well. The bottom layer of crust is sturdier than Pizza Hut’s version and there wasn’t a noticeable flop whatsoever. The standard elements of a Papa John’s pie remained constant, and they remain a rather solid chain pizza place.

To me, the Papa John’s Epic Stuffed Crust pizza may have taken over as the fast food go to alternative crust choice. It certainly doesn’t wreak of prefabrication like Pizza Hut’s and also doesn’t suffer from the sog dog flop factor either. It just tasted like a standard pizza that someone stuffed cheese into the crust, which is what we’ve wanted all along.