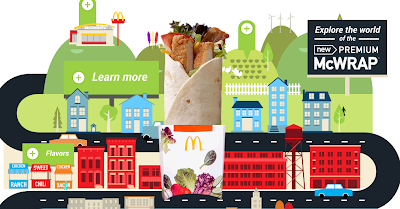 It seems as though all of the big guns have run out of ideas for bunned sandwiches, because wraps and flat breads are hitting the QSR mainstream.  McDonald’s is taking their turn in the wild world of bun alternative sandwiches with their Premium McWraps.  McDonald’s was the og when it came to the snack sized wrap industry but how does McD’s handle the entree sized wrap game? Continue reading to find out:

The McWraps come in a pretty huge plastic container that has been optimized for the on-to-go grabability.  Being able to up cork your wrap at the midsection and be able to eat the first half of it without even having to touch it is pretty ideal for eating while driving or walking, but I’m not quite sure how you eat the second half.
For our review we decided to get what would seemingly be the wrap aimed most towards healthy eaters and then the most sultry option available.  The Grilled Sweet Chili Chicken wrap has 360 calories, 9 grams of fat, 27 grams of protein and has a sweet chili sauce and cucumbers as game changers. The Crispy Chicken and Bacon wrap has 600 calories, 30 grams of fat, and has the aforementioned bacon and creamy garlic sauce to differentiate itself.
Firs taking a look at the Sweet Chili McWrap, you get the sense that you’re eating something pretty premium, at only $2.99 these wraps are pretty value priced for an entree sized sandwich.  The spring mix and cucumber are pretty exotic options for the Golden Arches and it’s encouraging to see.
Biting down you can really taste the sweet chili sauce.  This may or may not be a good thing for you.  It’s very sweet and takes over the whole flavor sensation.  The grilled chicken, however, tastes juicy and fresh, not at all dry which you might find typically in QSR grilled chicken.
The cucumbers were a very nice touch, although it was very hard to tell if they were in fact cucumbers or just over sized pickles.  They were very sweet, most likely due to the deep tissue sauce marinade it had just endured.  Overall the taste was pretty solid and tasted different from most anything you’d typically get at McDonald’s earning it a B rating.
Moving on to the Crispy Chicken and Bacon wrap, it was exciting to see just how savory McD’s made this wrap.  Going all out with fried (crispy) chicken and bacon is typically as enticing as you can get in a wrap.  With the addition of cheese, this was a pretty large splurge item.  But unfortunately the wrap left a lot to be desired.  The chicken was very meh and not very flavorful over all.  The crispy batter certainly didn’t differentiate itself.
Worst of all, you can barely even taste the bacon.  If you look closely at the photo above, the tiny, nibble sized, razor thin trinkets was all the bacon involved here.  In the grand scheme of things, you couldn’t even tell it was there when taking in all of the other ingredients.
The garlic sauce was also pretty underwhelming and whenever a creamy sauce doesn’t really differentiate with tastes, it’s pretty much just an empty calories down the drain.  In our opinion, McDonald’s should have just had two varieties and combined the Chicken and Bacon with the Chicken and Ranch for a Chicken Bacon Ranch.  But alas, we’re stuff with this and a C rating.
McDonald’s Premium McWraps:
Grilled Sweet Chili Chicken:
360 calories
9 grams of fat
27 grams of protein
Taste: B
Crispy Chicken and Bacon:
600 calories
30 grams of fat
30 grams of protein
Taste: C
~Fast Food Geek