Ever since the days of high school lunches, I loved fake pork. The treat of the month came whenever it was “BBQ Rib” day in the cafegymitorium. Processed ribs in the shape of bone in ribs were served, slathered in BBQ sauce and mounted onto a hogie bun. Just the mere thought brings me back to the simple days, back when your only care in the world was if you had enough money to buy a Yoohoo at the box social or who was going to give you a ride to the movies that weekend.

Despite this nostalgic fantasy land I just conjured, I’m sad to say I’ve never tried the McRib at Mcdonald’s, in any of its prior short term gimmick stints. In a classic Keynesian ploy, McDonald’s spikes the demand to astronomical levels and only supplies this cult classic sandwich for a couple of a weeks at a time. With the November 13th McRib end date hanging over my head like my student loan debt, I decided that I had to act fast and jump on this wild unicorn while it was still hot to trot. 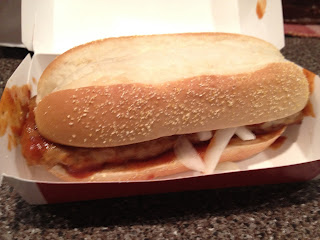 The idea of the McRib is easy. Create the artificial appearance of bone in ribs out of God knows what kind of mystery meat, douse it in so much BBQ sauce that the meat drowns like a mob hit over the Brooklyn bridge, add some cursory toppings like chunks of onion and pickles (probably not even necessary) to get the FDA off their backs and call it a day. And there you have it, fast food faux pork that the uncleansed masses clamor over for years, and then can only get their hands on it for a few precious weeks. Let’s just say that McRib mania is upon us. 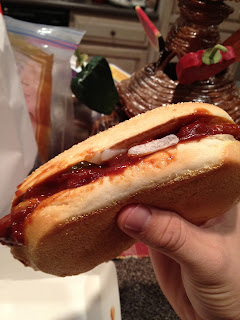 The very aroma of the McRib was quite arousing. It’s seductive scent spread through the air like chemical warfare. I quickly opened the box and set my eyes on this “tangy temptation”.  Despite the grand build up, I was quite miffed by the size of this creature. I guess I was expecting submarine and I got patrol boat. Regardless of the size, I hitched up my pants, loosened my belt and dove right in. 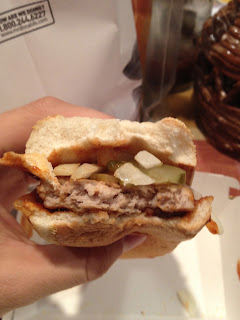 The age old sentiment that if something tastes too good to be true, than its usually lowering your life expectancy.  This couldn’t be more true here. I have to say honestly, that I was blown away by how good the McRib tasted.  I’m sure there are a lot of people out there that think I fell off my rocker, or I’m just a fast food fan boy, while the latter might be true, I can tell you that the McRib tasted so damn good, that I could feel my stomach literally jiggle after the first bite.
While not part of the lunch room makeup, the crisp onions and tangy pickles were perfect compliments to the faux pork, adding to my overall euphoria, despite what I thought coming in.  I was halfway done with the sandwich before I came up for air and I’m pretty sure if my eating experience was filmed, I just might have been floating higher than the Bieb’s new hair. 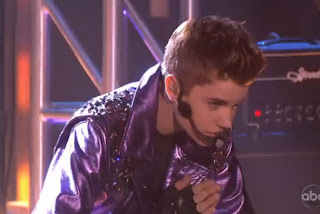 Needless to say, I’m currently smitten with the McRib. Despite all of the cyber douche’s labeling the McRib as an atrocity and a bigger joke than the NBA lockout, I’ll stand up to each and everyone and tell them simply, the proof is in the pudding..err pork. The only thing holding this baby back is it’s relatively underwhelming girth (I felt like I could easily have eaten two). But regardless, this is a call to arms, your deadline is fast approaching, come one, come all, raise up, get out of your recliners, and walk, run, skip, swim, drive, or hitch to your local McDonalds and tell the fine employees “McRib Me Dammit, and make it a double!” Hurry before it’s GONE!!
McDonald’s McRib: 4/5 Stars
~Andrew
@atkpitt12
Bonus Box Photos: 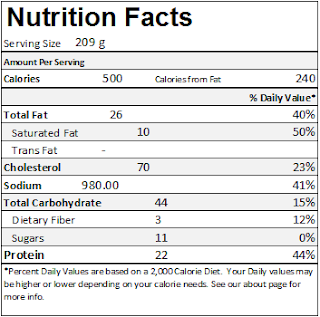