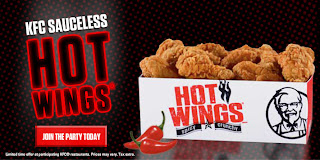 Tried and true, the chicken wing has been an American staple. Going out for the game? Feel like competitive eating tonight? Want to get your hands, face, and sometimes ears sauced up and use a couples acres worth of napkins and wet naps to clean yourself off and then have your whole body still smell like Buffalo sauce? If your answer is yes to any of these questions, then you’re more than likely gonna be eating chicken wings.
Something that has plagued the wing eaters for years is that last scenario I mentioned. Wing eating is almost always a slip slop affair. The sauce traditionally makes the wing, adding flavor, zest, and most importantly spice. The sauce makes the wings hot, which is another factor that macho men across the 50 states eat wings for; impressing everyone with their brave and Brawny Man chest hair curling spice tolerance. KFC decided to try and solve these issues, with their Sauceless Hot Wings. Infuriating and alienating wing sauce loyalists all over, many claimed that these wings would be tasteless in addition to sauceless. 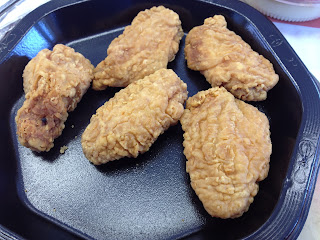 By marinating the actual chicken in spices and then adding what appears to be some sort of pepper infused dry rub to the outside, KFC believes that they have made hot wings, without any mess. Being skeptical at best at anything that defies the norm, I had to investigate these wild claims. 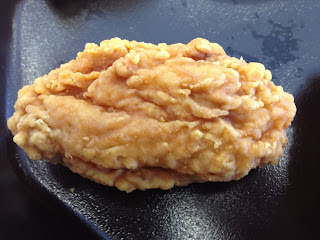 Just as expected, I walked out of KFC in a state of despair. In what can only be described as digester’s regret, the Sauceless Hot wings left my body in a tizzy. More on that later, but let’s get to just how bad these wings are.
Value priced at .50 cents a wing, you’d think you’d be getting a deal here, but whenever you buy these wings, you get an unannounced friend, Unsettling Ass Syndrome. A ripple effect that creates more groans, moans, and sharp random pains throughout your body than a shot of heroine to the eye. 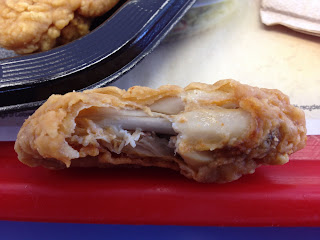 KFC describes these wings as crispy and spicy. But all I really found them to be were chalky and bland dogg. These wings are advertised for their fried outer shell, and you better believe there’s a boatload of it. The actual chicken meat inside is shrunken and shriveled surrounded by its death cocoon. That wouldn’t have been all that bad unless that breading wasn’t a cold stink pile. But sadly it was. 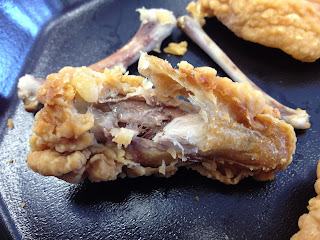 The breading wasn’t crispy, it had that hard and teeth grinding texture that makes you feel like it was vacuum sealed and frozen into suspended motion for 4-5 years before being served to you. The worst part is that there was no hot factor at all. In a blind taste test my guess would be that 4999 out of 5000 people wouldn’t be able to tell if what they were eating should be even labeled as hot wings. The only flavor of any kind came on a lukewarm at best after taste, that had the slightest tinge of spiciness. Tasteless Hot Wings indeed. 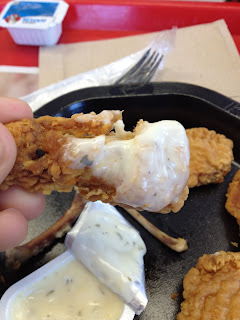 Drowning the failed science experiments in ranch didn’t make things much better. As I finished, I was left hungry and delusional. My hunger wasn’t satisfied yet I still felt like I was food drunk. My head spinning, my heart pounding, my left eye feeling like it was bulging, and my stomach making ungodly noises that would scare an antelope into running off a cliff.
KFC=Killing Functional Coronaries. My heart might never be the same. I hope I survive the rest of the day, but all I know is that if I do, I’ll be chugging Pepto like a 20 year old guzzling Natty Lite at his first college banger. 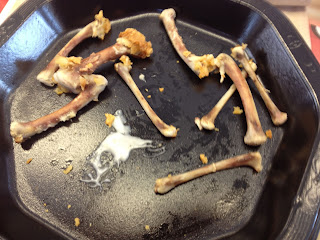 Do yourself a favor and pass on this.
KFC Sauceless (Tasteless) Hot (Not) Wings: 0.5/5
~Fast Food Geek 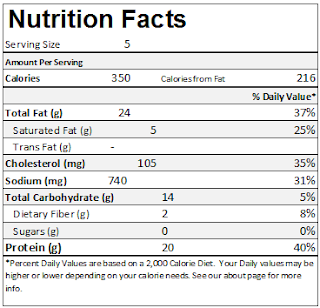