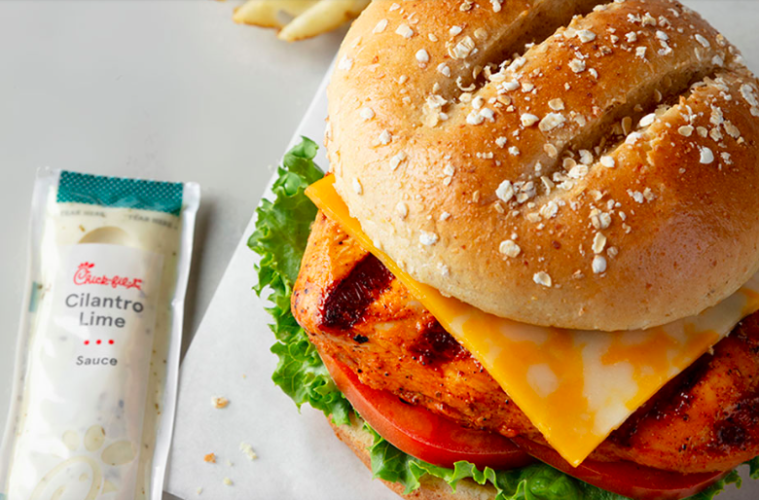 It’s a new year and Chick-fil-A has released a brand new sandwich for the first time in years. Let’s take a look at the Grilled Spicy Deluxe.

Chick-fil-A describes their new Grilled Spicy Deluxe like this:

A boneless breast of chicken marinated with a blend of peppers and grilled for a tender and spicy taste, served on a toasted multigrain brioche bun with Colby-Jack cheese, Green Leaf lettuce and tomato. Served with Cilantro Lime Sauce.

Chicken sandwiches are all the rage right now. Anyone with a cousin who has a deep fryer in their basement is attempting to concoct a chicken sandwich that can compete with the top guns. Chick-fil-a has decided to enter the final frontier with a grilled spicy sandwich, which to my knowledge is the only entrant in this alley.

While Chick-fil-a has been a pioneer in the simple, southern fried chicken sandwich game, they’ve brought a new level of quality when it comes to grilled chicken in the last decade. Having more of a “grilled in your backyard” flavor compared to most other restaurants’ “boiled in your baby’s bath tub” approach, Chick-fil-a has a superior product. My only complaint for years is the price just seems way too high for fast food.

So now let’s introduce the first entrant into the grilled spicy war, that hasn’t even garnered a competitor. Coming in at $5.65 for sandwich alone, this has a lot of price to justify. Upon reveal, it’s hard not to notice the grains and granules atop the artisan styled multi grain bun. The chicken has those charred grill marks that had me pining for warmer days. The chicken is marinated with spices, appearing to coat the chicken with an all over flavor bomb. Without the luxury of breading, grilled chicken needs to dunked in marinade to seal in that flavor.

Rounding out the sandwich was a piece of cheese that could come in Colby Jack, American, or Pepper Jack. Colby is standard, but I opted for the zestier Jack instead. Also along for the ride are lettuce and tomatoes. I threw in some dill pickle orbs to the mix, although that is a customization.

If you have Chick-fil-a experience, they make the wise choice of giving you a sauce packet on the side for you to administer as you see fit. Too often with takeout fast food, the sauce takes over the sandwich, creating a mush factor that can’t be undone. With the sauce packet, one can ladel it on top of the sandwich or even throw it on the side if you are a dunker. Cilantro Lime Sauce is the new brand new sauce created for this sandwich, and with a distaste for cilantro, I was a bit skeptical.

As you can see from the cross section, the sandwich stayed together, presenting quite well for fast food. Biting in the spicy chicken was very tasty. Having that grilled taste, followed by a nice afterburner of not only spicy but also flavor. The chicken was definitely a showstopper. The bun was hearty and withstood the moistness of the lettuce, tomato, and sauce with ease. The Cilantro Lime sauce was very much more Lime flavored, almost like a Lime Ranch, with a hint of cilantro. I was a big fan, as lime and ranch are an unexplored combination that definitely worked.

With no competition yet, I’m already willing to put the Chick-fil-a Grilled Spicy Deluxe on a pretty high pedestal. It’s going to take a massive undertaking to unseat this presumed king. With price being the only downside, this Grilled Spicy Deluxe is a first round knockout.