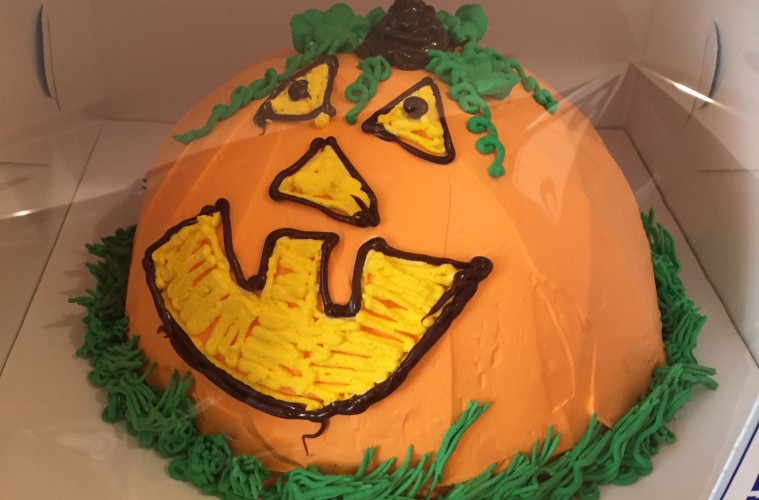 Baskin Robbin’s got a little wild for their seasonal cake this year.  For Halloween 2015 they introduced the Piñata Pumpin Patch Cake.  According to the advertisements, when cut, this cake will spew M&M Mini’s all over the place–like a Pinata.  This is so overwhelmingly silly that I knew I had to have one.

Obtaining one was slightly harder that I thought it would be, but I wouldn’t take no for an answer.  The first Dunkin Donuts/Baskin Robbins I entered had promo signs for the cake on their cake freezer.  I asked the employee if they had any or if I could order one and he said “No.”  When I asked if they planned on getting them, he said “No, we’re not selling those.”

To prevent further human interaction I went online to the Baskin Robbins website.  There you can place cake orders that are incredibly customizable.  I found the pinata cake and was able to select what kind of ice cream to include in the cake for a long list of options.  You can also select if you would like to have something written on the cake.  I thought it would be cool to have #FastFoodGeek written on the cake so we could have the best Instagram post of all time.  I placed the order to be picked up on Halloween morning and paid all online.

At 11:30 AM I entered my local Baskin Robbins to pick up my cake.  The employee at the counter seemed to be expecting me and said “oh yes, the internet order, one moment please.”  Five minutes go by, and the employees begin to scramble, checking the same freezer case for the fourth time.  One finally stops by and says “Just a few more minutes, we have so many cakes” while another makes a phone call to someone.  Finally a cake is miraculously produced from the back right as I had completely lost hope.  Back at my apartment I discovered my genius idea of having #FastFoodGeek written on it was never executed.  Good thing I didn’t request a marriage proposal to be written on it I guess. 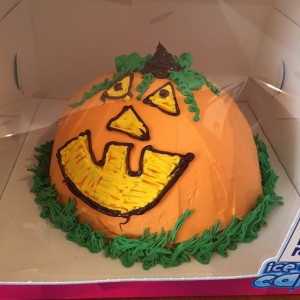 I tucked the cake into my freezer to wait for the big halloween party.  I hyped up this cake a lot so we were all eagerly anticipating the big show-y endless eruption of M&M minis spilling out of the cake and rolling all over the place.  We set the cake out with rest of our spread and got into position to catch all the loose candy flowing every which way. 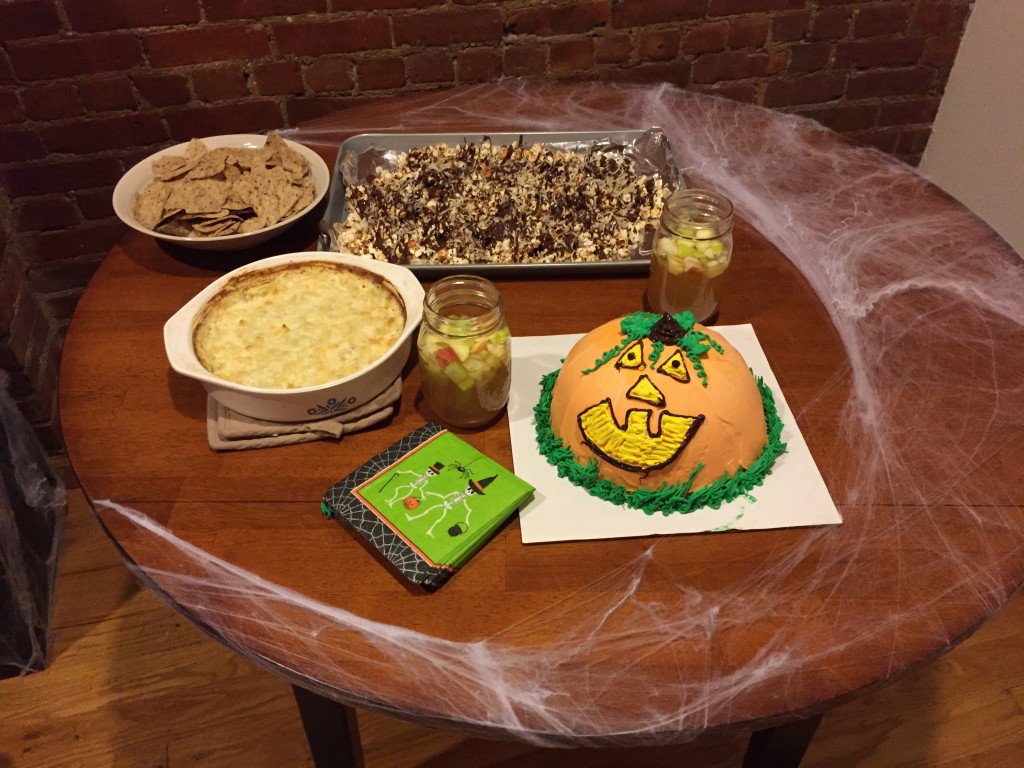 (Pro tip: be friends with creative girls and invite them to your party so they bring dips and popcorn and fall sangria–recipe at the bottom)

Everyone gathered around, I carefully made two incisions.  Slowly lifted the piece and then…

Nothing… no avalanche… not even a single M&M fell loose….

[image-comparator left=”https://fastfoodgeek.com/wp-content/uploads/2015/11/Cake_Enlarged_pumpkin.jpg” right=”https://fastfoodgeek.com/wp-content/uploads/2015/11/IMG_2497.jpg” width=”60%” classes=”hover”][/image-comparator]
It turns out–much like the new Taco Bell Boss Wraps–some key ingredients were left out of my cake.  Zero happiness or laughter were anywhere to be found.  What I received was drastically different than my expectation, visually and functionally.  Looking closely at the promo pic vs what my cake looked like, it actually looks like it was made incorrectly with a layer of ice cream immediately above the cake layer.  The promo pics do not have ice cream above the cake. 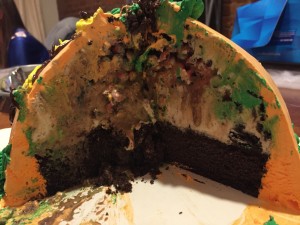 While the big reveal was a let down, the bottom line is this is still supposed to be a cake, not just a gimmick.  As far as taste, I was pretty happy.  One concern was that the M&Ms would be rock hard and they were not.  The cake portion was soft and moist as well and the Oreo ice cream is still a winner.  While I was probably the only one that was “devastated” by failed candy spill, we all still enjoyed the cake.  It was a bit expensive at 29.99 for a cake that serves 6-8, but it actually probably serves closer to 8-10.  Of course, this hardly matters now that it is November and Thanksgiving Turkey cakes are on the Baskin Robbins website now.

As a bonus, here’s the recipe for the Fall Sangia, it was tasty and worth a try: 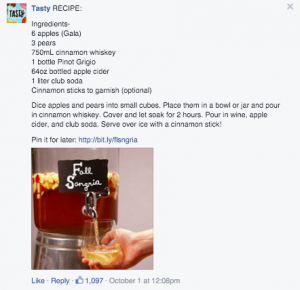