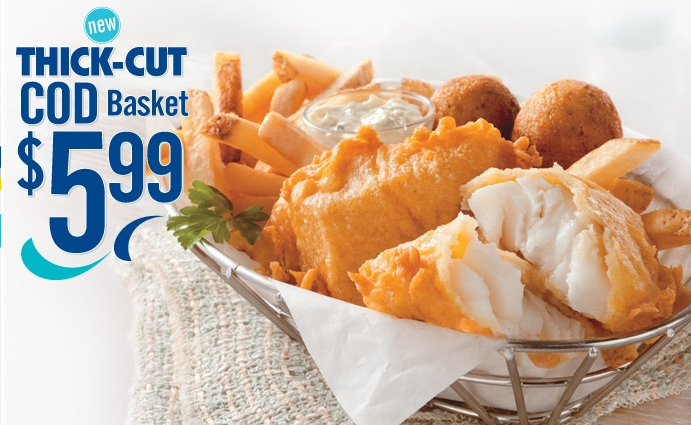 For as long as I can remember, Long John Silver’s has been my favorite fast food restaurant.  Despite common sense, public opinion, and the FDA, I have thrown caution to the wind and have continued to eat fast food fried fish on a semi monthly basis.  Throughout the years Long John’s has transformed to a dump with cheap prices to a dump with over the top, borderline ludicrous prices.  Long John’s newest offering comes in the form of their Thick Cut Cod Basket.  I decided this product would be Fast Food Geek’s inaugural review for the good ol’ pirate.

Despite being on the bottom tier of fast food popularity, Long John’s continues to plow through the quick sand, spitting out commercials that typically lack creativity or originality.  The Thick Cut Cod has been pepped up and touted as Long John’s thickest cut of fish they’ve ever released.  It appears that Alaskan Pollack is the fish they typically use in their fillets but more importantly, I know that each fillet packs 4.5 grams of trans fat, enough death crystals to wipe out the whole population of Montana.  The Thick Cut Cod variety is dramatized to appear to be the size of the LJS employee’s face in the commercial, so it was time to find out.

I’ve heard some rumblings online that the Thick Cut Cod was actually a puny pile of lies and whenever I opened up my crate, my suspicions were confirmed.  Long John’s had taken the length out of their original fish fillets and squished them together in an almost cube like square.  Sure they might have been thicker than their other fish, but they were also a lot shorter, stouter, and weaker.  The fact that only a two piece meal packed a $5.99 punch didn’t really help salvage the situation.

But as we’ve all come to realize with fast food, taste can make all the difference.  Typically Long John’s brings it with a surprising flaky fish quality that brings the ooh’s and ah’s of a full body massage.  But I was left sorely disappointed in the curdled cod.

As you can see they look pretty nice compared to the ad photo. Thick and somewhat substantial, but after biting down it almost felt like I was eating floss.  The fish had a very tough and stringy texture to it, that was rather off putting.  It was just simply a case of bad fish.  The rough and rigged interior was salvaged only minutely by the flavorful death crystal infused battering.  But not enough to save this ship.