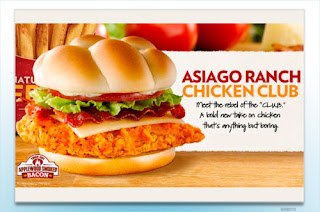 For the longest time I’ve been meaning to do a Classic FFG Hall O’ Fame review for Wendy’s Spicy Chicken sandwich. It was a gimmick back in the golden ages, and was a true rags to riches story as it made it to the full time menu, not looking back, and becoming one of Wendy’s most popular items for a long time. But then Wendy’s had the brilliant idea to make a sandwich that utilized all of their chicken breast options and make them even better. 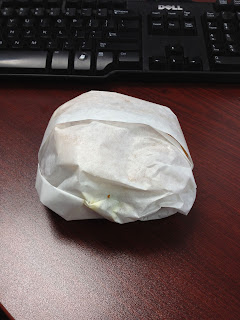 And just how do you make a Hall of Famer better? Well you get rid of the non sauce condiment known as mayo, and put on the O.G. all time great ranch. Add asiago cheese, something the original is definitely lacking. And the ultimate addition to anything is bacon. Even if the sandwich already had bacon on it, adding more bacon would still be considered ultimate in it’s addition factor. I for one, love that whenever a sandwich is named as a “club” it inevitably means that bacon will be involved. That is one club I would not mind paying membership dues to annually. Add the infamous spicy chicken fillet, the bun that Wendy personally butters up herself with awful jokes about her deceased father, and you have a heavy weight title defending champion. But, is this sandwich a paper champion? I had to see because as my father always says , “That’s why they play the games”. 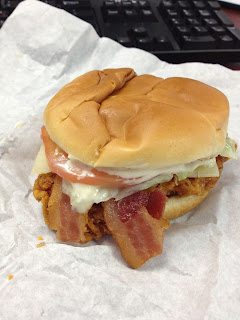 Per typical with any Wendy’s release, the sandwich comes out 78% flatter than the ad photos make it seem. I don’t know if they teach the employees to smush, smash, and press whenever they wrap up the sandwiches in the plastic, but out of any restaurant I’d have to say I’ve been delivered a product that seems to have been steam rolled more often than not. But despite this, as you can tell, the sandwich piles a pile of punch. 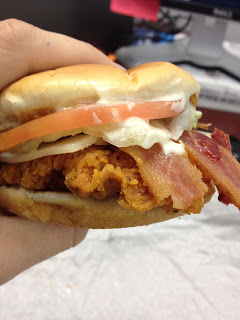 With a plump and zazzy breast, a thick hunk of asiago, lettuce, tomato, enough ranch dressing to flood most of Indonesia, and some thick ass bacon, even the Wendy’s press couldn’t make this sandwich flat. Biting in, I was taken back. Luscious flavors surrounded my pallet like the German’s invading Poland. Spice factor, rich and hearty sauces and cheeses, and the golden goose of meats (bacon) wrapping around my heart strings like a warm blanket of TLC. Yes, this sandwich is all that and a bag of Fig Newtons. 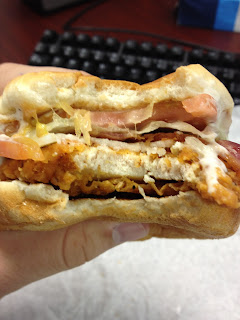 This is one of those sandwiches where you want to savor, but just can’t help yourself from mounging in until all you’re biting is your thumb. At one point, I couldn’t think of a way to make the Spicy Chicken original any better, but Wendy’s has done it with the Asiago Ranch Chicken Club. The only thing separating this thing from a perfect 5 rating is the fact that the cheese was pretty much looseleaf on the patty. If there was even a hint of melted conformity, it would have sent this to the stratosphere. One day, it’ll get there, but until then, I’ll have to straddle down a 4.5 star rating.
Everyone, do yourself a favor, next time you’re hungry for an orgy of flavor, take one of these down to stomach town. Bombastictown population: You!
4.5/5
~Andrew
@atkpitt12
Asiago Ranch Chicken Club : 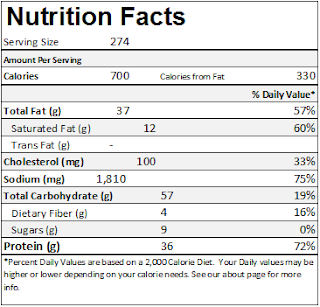