Fast Food eateries have many different strategies for competing with their rivals. Some will keep an even keel, with a base menu that stays steady on the ebbs and flow of the supply/demand stream. While others, such as Taco Bell, risk their dignity and brand image every month with a gimmick that can either flop like a wet pancake in a typhoon or can rise all the way to full time menu stardom.

Such a track was laid out for the Cheesy Gordita Crunch. It is the spawn of a gimmick, that has also released gimmicks off of itself. Yeah, that’s pretty confusing, but the breakdown comes from the evolution of Taco Bell first creating the Gordita. Pretty much a flat bread taco, it has been around for many years, and the combination of pillowy flatbread, hot beef, and cheese generally is a good combination.

This directly lead to the eventual gimmick release of this newly crowned Fast Food Geek HOF member, the Cheesy Gordita Crunch. Take the flatbread used in a regular Gordita, sprinkle it with shredded cheese, then wrap that around a hard shell taco topped with pepper jack sauce, and there you have it, a wild and flavorful double taco. To conclude my evolutionary description from above, the Cheesy Gordita Crunch was the inspiration for one of the first reviews I ever did back in December of 2008 with Bacon Cheddar Gordita Crunch, which essentially was the same, except bacon bits were added to cheese on the flatbread outer shell. 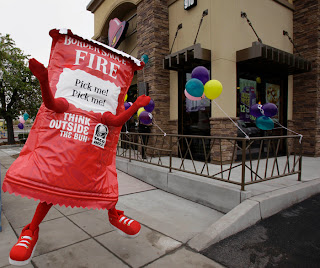 Enough of the history lesson, and lets fast forward to present day madness. The Cheesy Gordita Crunch has been on and off the menu at Taco Bell for years, and you could always order it as a “non menu-menu item” to trusted Taco Bell employees who had half a clue of what was going on. But this bad boy has officially been thrown onto the full time menu, even been given its own combo (#10) and Big Box.

Going to order the Big Box Combo, one thing has become abundantly clear, Taco Bell has been getting stingier than that friend you have who mysteriously disappears to the bathroom whenever the check comes. The original $5 Buck Big Box contained a gimmick item, two other regular menu items, Cinnamon twists, and a large drink. Some time ago they got rid of the Cinnamon twists and now they’ve even increased the price by 50 cents. Sounds more like a mid sized mediocre box to me. But as a side note, the Box creates a very convenient to-go tray, helping you avoid a lap full of sauce.

Regardless, it’s still a pretty hank amount of food for the price tag, and with the chance to win a Playstation Vita with the code on the box, it still got my blood pumping with excitement. For whatever reason, if you give me a chance to win something, even with infinitesimal odds, I’m happier than a beaver at Home Depot.

Unsheathing the beast, I was preparing myself for the “cruncheweesy” phenomenon that Taco Bell campaigned years ago. The combination of three adjectives into one marvelous bite is something that other restaurants can only hope to obtain. Crunchiness, chewiness, and cheesy were once thought to be mutually exclusive ideals, but that school of thought has gone the way of the Flat World idealists.

Peeling back the flat bread on one of these feels like you’re doing something scandalous and secretive. It feels like I’m heads up in the final table of a Texas Hold’Em tourney, and I’m sneaking a peak at my hole cards. Its becoming all too clear that I’ve lost my mind. As you can see the cheese distribution is skimpy at best, with the Taco Bell employee taking little to no regard for our review into account.
The inner lurkings of the Mexican treat are fairly simple. Boatload of cheese, beef, random shards of lettuce, and a smear campaign of the zesty pepper jack sauce. I’ve always wandered if shredded lettuce can be made by putting whole lettuce leafs through a paper shredder? Seems like it would be easier than cutting it up with a knife.
Biting down, it was like someone had covered me in a heated blanket made out of cheese. The caressing warmth of the flat bread soothed my soul and eased my mind. The rich, abundant fields of cheese in shredded and sauce form, coated my stomach in a warm envelope of love. Just like old times, I was basting myself in a crunchy, chewy, cheesy state of mind.
About half way through, I experienced what every taco eater dreads: the mid court, back door, land slide. Naturally occurring from typical taco eating, the continual biting down on one side, leads to the contents to sequester themselves in the back end of the shell. Before you know it, you’re half way done with your treat, and your next bite could lead to a back end squirt. Luckily I caught this phenomenon just in time, and was able to start biting from both ends, avoiding any type of drain leak.
The Cheesy Gordita Crunch is all that I remembered it to be, rich in flavor and texture. It combines many different elements, the best of them being a barrage of cheese. If you’re looking for a go to at Taco Bell this should be your leading lady.
Cheesy Gordita Crunch: 4/5
~Andrew
@atkpitt12 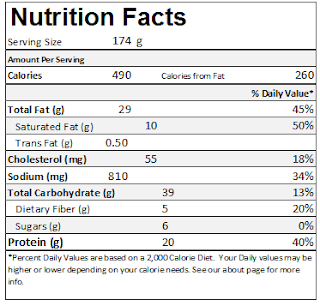